Our story of marriage separation didn’t end in divorce, it ended in a new type of friendship 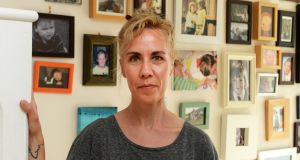 'All four of us still live in the same house and neither he nor I see any reason to change this even if we could' Photograph: Cyril Byrne

My marriage ended about four years ago. I won’t tell you the reasons why, because every marriage that ends has its own reasons and they are all painful and sad. However, because of economic reasons, my ex and I were forced into what most would deem an intolerable situation: being separated but not being able to separate.

Our marriage was finished but we could not afford to spilt up with a mortgage, two kids and our own small business to support. So, I moved into the spare room as we both tried desperately to keep ourselves sane and functioning. Having two bathrooms helped.

The first couple of years were tough – panic attacks, fear, loathing (myself, him, the situation, the world) all featured constantly. I would wait embarrassingly at the school gates, hoping no one would notice me so I wouldn’t have to smile and pretend. But secretly I was screaming for someone to help me. I didn’t know how to ask and I was too afraid of judgment. Except for a few very close friends, no one knew. The shame of failure is a most powerful force.

In the past few years I have had to ask myself many times why this is? Why is the shame so heavy? Why, when I talk about my marriage ending, do people glaze over? Or, more often, become instantly distant? They back away suddenly to an errand they had forgotten needed their urgent attention. Or worse, they get preachy or angry at me, as if I am some kind of leper who still has the audacity to think they can continue to be part of society. I do not have an infectious condition.

Slowly, I’ve managed to let go of my own anger, disappointment and hurt and come to realise that these reactions are because there is one hugely popular narrative for the breakdown of marriage and it’s not one of understanding. This bitter divorce storyline has become the standard for all of us because it is perfect at providing high-octane drama for TV, film and books.

I have heard myself talking, wishing for me to please shut up as I got entangled in the drama of it all

The basic narrative is this – a marriage breaks down, both parties hate each other. They fight and bicker and look for any opportunity to stab one another in the back or get one-ups on the other. They go to court for a long drawn-out battle where the only winners are the lawyers. The kids get screwed up because of the whole process. Finally the exes go their separate ways but neither one ever, ever forgives or forgets the betrayal or hurt of the other.

This story is okay if you have some distance from it but you certainly don’t want it coming around for a cup of tea and crying on your shoulder asking for empathy. I understand that it’s scary and uncomfortable. I have heard myself talking, wishing for me to please shut up as I got entangled in the drama of it all and knowing I am selling something that shouldn’t even be for sale.

But now I have a different story.

It started out with flailing for solutions. When I had the strength, I would frantically crunch numbers and look at job sites hoping something would add up to an escape route. Nothing ever did and perhaps that was because most of my energy was taken up with pretending everything was okay while being a working partner in the business and raising two kids. I zombie-walked through days, then paced my room all night. There were some days when I actually hid in a cupboard.

Then, one day in a shopping centre, I ran into another woman who was going through a break-up. As I listened to her pain and anger, I felt myself sinking into a hole of helplessness. Her anger was palpable and understandable and my heart ached for her too. But listening to her struggles, I realised that I could make a decision. I could decide how I was going to be. I could decide who I was going to be. And with that one realisation everything changed.

It was extremely hard at first. Like everyone, I wanted vindication and validation

From that point on, I tried to base all my other decisions from this basic premise – who did I want to be?

It was extremely hard at first. Like everyone, I wanted vindication and validation but I was never going to get what I wanted – that’s why the marriage had ended in the first place. I recognised that my power was in who I decided to be, not proving who was right or wrong. After years of feeling helpless and trapped, I had a sense of power back and I began to heal. I could decide who I wanted to be – not for the good of anyone else but me. I could make my life better no matter the circumstances.

Once I understood I could make decisions to better my own life everything changed because I took back control and, with this, my head started to become clearer.

All the things that hurt me or made me angry about the marriage were no longer relevant because we (yes, he and I) had decided to not be married. I had to change my expectations of him and he of me. I stopped apologising for myself, started to see who I was and started to let go of my old idea of who he was or should be.

I don’t know when, but at some point in year three, we both decided that we were to no longer discuss the past. We had a new relationship now where the issues of being husband and wife were no longer relevant. We were now a partnership raising two children and keeping a business afloat.

But I can’t tell you much about his journey because we also decided that certain things were none of our business any more. This can be hugely liberating.

I, of course, must acknowledge that my ex had his own healing to do and he worked hard at becoming a great dad and rebuilding our relationship into something new.

But I can’t tell you much about his journey because we also decided that certain things were none of our business any more. This can be hugely liberating.

Now I can very proudly say that we are friends.

All four of us still live in the same house and neither he nor I see any reason to change this even if we could. I have no desire for our children to see less of their father. For us, ironically, it has now become the easier option to stay. Honestly, I do not know if we would have reached this point if we had not been forced into this situation but man, am I glad now that we were.

People, of course find it weird and I can see most can’t get their head around it. “Surely you will get back together,” or “It’s just like being married then except you don’t sleep together,” they say. But it’s not.

It is so far from that.

But it is hard to explain. We are not a couple but we are not room-mates. We are also not just friends because we have two kids together and a history. The simplest way I can put it is, it’s a new mindset; it’s a new kind of family.

I just wanted to put it out there that the story of a marriage separation can be different.

There are still plenty of hiccups and arguments and working out stuff but we are both sure that this is the best solution, for us . . . at this moment.

And that is the best anyone can wish for no matter what their circumstances.

Of friends, let me say this. Mine are the best. No, really, the best. Those special few who patiently held my hand or kicked my arse . . . they are the best people I know and I will never be able to repay such kindness.

I just wanted to put it out there that the story of a marriage separation can be different. They are never easy, they are never not sad but they can help you develop into something new. A new type of friendship. It is not the most exciting story, but I can tell you everyone comes out okay in the end.