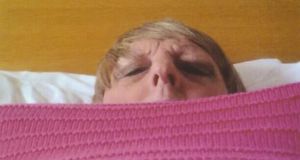 “As far as I know, I’m the oldest transgender person in Co Galway,” Christine Beynon (74) tells me. We’re talking in the front room of her house in east Galway. In the hallway outside is a framed photograph of a muscular man on a yacht. It’s the only photograph Christine has on display of herself when she was a man.

“I don’t want reminders of my old self,” she explains. “I don’t miss my old self.”

She is anxious to distance herself from the highest-profile transgender person in recent years, Caitlyn Jenner. “Caitlyn Jenner doesn’t speak for us, or for me. She’s not had surgery, as I have had, for instance. And she talks about how she misses Bruce sometimes. I don’t miss my old self.”

Beynon was born in London’s East End. “I knew I was a woman when I was about 10. I used to dress in my mum’s clothes. I knew within myself what I was doing was wrong, but it felt right.

“Once, I put on one of those dresses you wear for ballroom dancing, and there were visitors in, and they laughed at me, the big boy in the dress. That was the last time anyone saw me with a dress on until 2008.

“I wanted to be a woman from when I went to secondary school but then the marriage came along and that took over my life. It was my commitment. I brought two kids up; I worked.

Beynon had met her Galway-born wife in London in 1964 and they married in 1970. Some years later, they moved back to her wife’s Co Galway hometown. She never confided in her wife that she believed she was transgender. “I felt that if I had told her, it might have broken the marriage up. I tried to bring it up in later years, but she didn’t want to know.”

I thought, if I don’t do it now, I’ll waste the rest of my life regretting it

One of the ways Beynon had tried to signal to her wife was the close attention she paid to how she did her make-up. “I learned about make-up by watching how my wife did hers. I once asked her to make me up.” Reluctantly, her wife assented, but Beynon never asked again.

When her wife was gone shopping to Galway, Beynon would try on her clothes, “but I never put make-up on, because I wouldn’t have got it off in time”. “It was called cross-dressing in those days.”

She rescued thrown-out tights from the bin and kept them in a box in the loft, along with other items of clothing and a book she had found about transgender women. “I hid them in a place I knew she never went to.”

Her wife died of cancer in 1998, but it took several more years for Beynon to have the confidence to explore the possibility of a transgender life. “I bought a computer in 1999, and the first things I looked up were cross-dressing and being transgender.”

It wasn’t until 2006 that Beynon felt ready to come out of the “denial” she had been in about her gender identity. “I thought, if I don’t do it now, I’ll waste the rest of my life regretting it.”

Gay people can hide their gayness, but we can’t hide our gender

It was at this point in her life that Beynon began to document the changes in herself as she started on her transgender journey, by taking photographs of herself.

These photographs now form part of a show, Becoming Christine by artist Amanda Dunsmore and curated by Liz Burns, that is currently running at the Galway Arts Centre.

In 2006, Beynon went online and found what she describes as a “dressing service” in London. This is a service that facilitates people in transition who want to dress in a different gender. “Many of them in London are on Brick Lane. It’s usually a woman who provides the service. It’s a safe place for people like me to go.”

The first time that Beynon visited the dressing service at Brick Lane, she cried when she looked in the mirror, because it was the first time in her life she looked like what she felt she really was: a woman.

“That was the first time I’d seen myself with a wig on.” It was also the first time she had put on a dress since childhood. From 2007, she started dressing full time as a woman. “In one year, I did 15 journeys to London to use the service. It was so exciting to have made that move.”

Back in Ireland, she went to a gay sauna in Galway, to try and connect with with other people in the trans community. Beynon describes herself as “straight, but being trans is like being in a secret society in a way. Being older too, we are the hidden ones in society; it’s easier now for younger people.

“Gay people can hide their gayness, but we can’t hide our gender. For instance, I know a lot of gay people who are not out, and who are in marriages.”

By 2010, then in her late 60s, she was seeing a gender doctor in London and moving towards surgery. “For me, surgery was very important. I wasn’t complete. How can I describe it? From a young age, and when I was going through puberty, I used to sit and clench myself, hoping it [her penis] would go back into itself and it never did. There was never any other option for me, other than surgery. My one regret is that I didn’t do it earlier.”

Beynon had her gender reassignment done in London. She gets up to show me a thick folder of documents, which track the long process of surgery: the consultations with doctors, psychologists, medical reports and all the many other elements involved.

One of the many striking photographs in the exhibition is an image of Beynon lying in bed, a bedspread almost right up to her nose, taken from above. It’s an odd angle, and such is the perspective, that it’s clear she didn’t take the image with her hands. As they are all selfies, I ask how she took this picture. Was the camera on a timer at the end of the bed?

Beynon laughs. “That picture was taken when I’d just had my breast operation and was staying in a hotel. I wedged the phone between my toes and put it on a 10-second timer.”

Among the other elements of the show at the Galway Arts Centre, all based on profiling Beynon’s transgender journey, is a video and an audio installation. “I hope the public reaction to the show is positive,” she says.

As for her new identity in the small rural community she lives in, “I told the post lady I’d be changing my name. That way, everyone got to know. Everybody knows I’m transgender and nobody has bothered me, but of course you never know what people are saying about you. But I don’t care.”

Becoming Christine is at the Galway Arts Centre until July.  galwayartscentre.ie/exhibitions/123-becoming-christine