‘Living in direct provision does not mean your life is over’ 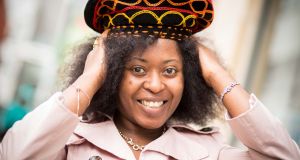 Mabel Chah: “80-90 per cent of the time I don’t hear back from employers.” Photograph: James Connolly

Mabel Chah vividly remembers the voice from the advert that played over the loud speaker in Dublin Airport the day she arrived in Ireland. She stopped dead in her tracks when she realised it was not speaking English but a foreign language she had never heard before.

“I’ll never forget the way I felt in that moment. I panicked. Where was I and what language did they speak here? I thought I was going to the UK, where they spoke English. The Irish language hit me in the face.”

Chah, a native of the English-speaking region of Cameroon, was told by the people who organised her passage abroad that she was going to the UK and had presumed Ireland was a region of Britain. She arrived in Dublin in August 2013 after making the difficult decision to leave her loved ones behind in Cameroon to seek safety abroad. At the time she was working part time with a communications agency.

When you become too opinionated or vocal in Cameroon, it makes people uncomfortable

She was too outspoken to stay at home. “I’m a woman from the minority English-speaking part of Cameroon. No matter how much people say there is gender equality in Africa, a woman cannot earn the same as a man. Priorities are given to men. When you become too opinionated or vocal, it makes people uncomfortable.

“You don’t want to get to the stage when you and your family feel threatened. I needed a place where I could be safe and if I had something to say I would get help as opposed to being shut down.”

The middle of nowhere

She spent her first month in Ireland in the Balseskin direct provision centre in Finglas, a place she says felt isolated and lonely. “The centre feels distant because you’re made to know it’s just a transition reception centre before you’re sent somewhere else. It’s in the middle of nowhere; it’s like you’re frozen out. You don’t know if you’ll be there a month or longer, so you can’t make plans.”

She was transferred to the Globe House direct provision centre in Sligo town and immediately began contacting choirs, community groups and the local church.

“From the day I entered Sligo, I loved the place. I could see people and houses around me. Everything was close by. My impression of living in Dublin was always a sense of distance.”

Before leaving Cameroon, she was a member of music group that rose to national fame after winning the Nestlé African Revelation singing competition. The group, which was called Baam, signed a three-year record deal and travelled to Paris to record a single before touring around Africa. However, she says the group’s French speaking manager failed to promote the group’s music.

Eager to continue making music, she joined the Sligo cathedral choir and the Sligo Gospel Choir

“It was the first time an English-speaking band got to that level in our country. Nestlé gave us this automatic manager, but he had no idea what to do with us, so it just killed our career. We stayed together and tried to do things on our own, but in 2012 it just fell apart.”

Eager to continue making music, she joined the Sligo cathedral choir and the Sligo Gospel Choir. She also joined Sabona Community Productions, a group of actors, writers and musicians who promote integration through the arts.

“If there is one universal language it is music. Sometimes you don’t speak the same language, but you can always dance, you can move. Even if you don’t have rhythm you can still move.”

After two years in direct provision, she secured her refugee status and permission to remain in Ireland. “I just felt relieved because it meant I had freedom. I could go places, work and study.”

She says people in direct provision must show initiative by contacting local community groups and sharing their knowledge and expertise. “Living in direct provision does not mean your legs have been cut off or your life is over. If you come here to be alive, then do it. If you want to get into the community, then go out there.”

She also became involved in setting up the Global Kitchen initiative while in direct provision. Three years later, the international food celebration still takes place every month. “It started with just five people and now we cater for 150. For the next one, all the Syrians from Ballaghaderreen are coming to eat, which is so exciting.”

The goal of the volunteer-run project is to ultimately provide paid employment for people when they leave direct provision. “When people leave these centres they go where the work is. We’re hoping this can become a social enterprise which would pay people to stay in Sligo.”

Chah is busy volunteering and is looking for paid employment. She says every business in Sligo town has a copy of her CV. “Everything I do is volunteering, and 80-90 per cent of the time I don’t hear back from employers. I don’t like being idle so I’m at school studying office administration and Spanish at Sligo IT.”

She has considered packing her bags and leaving Sligo for work in a larger town or city, but she feels too connected to the local community to leave. She rejected a friend’s suggestion that using a more Irish name on her CV might make it easier to secure an interview. She hopes to find a job in the arts and is also interested in advertising.

She has applied for a visa for her mother to visit Ireland for a month in July. She suggested that her mother apply for family reunification in Ireland but says she will never leave Cameroon, despite the growing unrest in the country’s English-speaking regions.

“The civil unrest is riling people up but I really hope it doesn’t escalate because then my mother will have no choice. There is still some semblance of peace.”

Chah’s volunteer work helps distract her mind from the loneliness of being so far from loved ones. “I’m afraid if I stop, I’ll think about being alone. But my positive experience in Sligo has made me almost not miss my family. My mum always asks how I’ve survived and I tell her she just needs to come here and then she’ll understand.