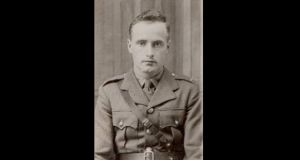 Art Magennis, who died on February 12th, 2019 in his one hundredth year, was a Defence Forces veteran with almost forty years’ service.

He was one of the diminishing number of those who served through the Emergency and he was decorated for bravery during his service in the Congo in 1961.

He was born in Ardglass, Co Down in 1919, the second eldest of six boys who were all taught by their father who was the principal in the local National School.

He completed his secondary education at St Malachy’s College, Belfast. As a young man he was fascinated with cars and motorcycles and he maintained a life-long interest in vehicle technology and in particular, the development of armoured vehicles.

Art Magennis was one of the thousands of young men who answered the call to arms to defend Ireland made by the taoiseach Eamon De Valera in June 1940 as the war in Europe was escalating and a state of emergency was declared in Ireland.

Art volunteered to travel alone, unarmed and blindfolded through hostile territory to negotiate for the lives of his captured comrades

He enlisted in the Army in what was then Portobello Barracks in Rathmines in June 1940 and served as a trooper with the 2nd Motor Squadron.

On completion of an officer training course he was commissioned as a Second Lieut in February 1942 and he was posted to 1st Armoured Squadron of the Cavalry Corps.

This unit was part of a composite cavalry regiment that was used to represent the “enemy force” during a series of major exercises involving the two divisions in the River Blackwater area in Munster in the autumn of 1942.

In 1948, he completed a course on the Churchill main battle tank with the British Army and he was an accomplished instructor in the Cavalry School on the handling of armoured fighting vehicles. He put his skills to good use in commanding the armoured cars during the fighting in the Congo when he was deployed in June 1961 as the second-in-command of the Armoured Car Group 35th Infantry Battalion.

The United Nations (UN) mounted two operations in August and September to detain and deport European military personnel and other mercenaries who were leading the gendarmerie in Moise Tshombe’s breakaway province of Katanga.

The operation in September (Operation Morthor) resulted in heavy fighting in Elisabethville and three Irish cavalrymen were killed in two separate ambushes. The Irish armoured cars were also in action in support of the Indian and Swedish contingents at the height of the fighting.

Twenty-eight Irish personnel including the commanding officer of the Armoured Car Group were taken prisoner by the gendarmerie during the fighting and Art took command during this time.

Godefroid Monongo, the Katangese minister of the interior, threatened to have two of the captive officers executed unless two named Belgian mercenaries were released.

Art volunteered to travel alone, unarmed and blindfolded through hostile territory to negotiate for the lives of his captured comrades. He met the senior mercenary who was believed to have been a Frenchman and, after intense negotiations, he assured Art that no harm would come to any Irish prisoner.

You are a soldier twenty four hours a day, three hundred and sixty five days a year, leave is a privilege

Having being held overnight, Art was again blindfolded and driven back to Elisabethville where he resumed command of the Armoured Car Group. He was awarded the Distinguished Service Medal with Honour for his courageous actions.

He completed a second tour of duty in the Congo as Group Commander Armoured Car Group 2nd Infantry Group in 1963-64 (this was the last Irish unit to serve in the Congo).

In between his two tours of duty in the Congo Art led the research into the process for replacing the venerable but obsolete Ford armoured cars and this resulted in the procurement of the Panhard fleet of armoured vehicles commencing in 1964, these armoured vehicles served with Irish units in Cyprus.

He served twice with the UN in Cyprus with the Armoured Car Group in 1967 and in 1970. Art retired from the Defence Forces in 1979 as a Staff Officer in the Director of Cavalry’s Office.

Art met his wife Maura on the Curragh when she was visiting her brother, the late Comdt Hugh Lalor, who was stationed there. They married in St Vincent De Paul Church, Marino in 1946 and they had five daughters. They lived in Newbridge until after his retirement when they moved to Ardagh Court in Blackrock, County Dublin.

He did not rest on his laurels in retirement; he took up computer studies, he completed a course on creative writing, attended classes to improve his Irish language and he continued playing bridge up to his mid-nineties. Art loved his garden and nature and he took great pleasure in bring visitors to his “oasis of tranquillity” and showing off his gardening prowess.

He was an active member of the Cavalry Club until his health deteriorated in recent years and he was also a member of the Association of Retired Commissioned Officers and of McKee Officers Club.

Throughout his Army career he was a role model and a counsellor who influenced an unquantifiable number by steering them in the right direction, not just in their military service, but also in civilian life.

Art embodied all that was good about the Defence Forces with his sense of honour, duty, loyalty and above all courage and he was very proud when the military baton passed to his daughter Maeve, who served with distinction for twenty-one years in the Defence Forces.

Many will recall one of his great phrases when an officer or soldier applied for a day’s leave, “You are a soldier twenty four hours a day, three hundred and sixty five days a year, leave is a privilege”, but of course you got your leave.

Magennis was a family man, he was immensely proud of the achievements of his five daughters, he doted on his grandchildren and they marvelled at the extraordinary interest he showed in their subjects as they progressed through education.

He was predeceased by his beloved wife Maura in 2008 and is survived by his daughters Carmel, Mary, Barbara, Maeve and Fiona and his brother Tim and their families.