‘They have an intrinsic value, but we think their symbolic value is very powerful and strong’ 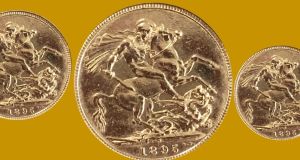 A few years ago, Andrew Keating, the chief financial officer of Bank of Ireland, was chatting to some colleagues, who were on the cusp of their retirement. Over the course of their conversation, the subject of an old work practice cropped up.

Once she finished raising all three of us... She went back to university and graduated at 71

From 1931 to 1973, women in Ireland had to cease employment once they married, thanks to the marriage bar. Generations of women were preventing from pursuing careers and instead forced to stay at home.

“It was highly discriminatory,” says Keating. “To be fair to the bank, they were trying to look after their colleagues by giving them the gold sovereign, but obviously it was a very different era.”

The story had some personal resonance for Keating. His own mother, Susan, had been forced to give up working after she married in the 1960s and he witnessed firsthand the sacrifices she made.

“While we, as a family, probably benefited from her sacrifice, it did ultimately impact her,” says Keating. “She had to give up work. She was a very bright lady. In fact, once she finished raising all three of us, she went back to work in the local Credit Union. She went back to university and graduated at 71.”

After hearing about the gold sovereigns, Keating decided to investigate the further.

“I was very interested in the story and started asking around,” he says. “We identified that we had a small stock of these sovereigns in our safe.”

After discovering they still had a trove of gold sovereigns, Keating thought it might be an idea to subvert the original practice and award them to women “who are helping us as a bank and helping Irish society accelerate towards gender balance.”

Since discovering the trove of gold sovereigns, Bank of Ireland has awarded them to women like Sharon McCooey, head of Linkedin Ireland, and Carol Andrews, founder of the 30% Club Ireland.

“The nice thing for her was that her father worked for Bank of Ireland for forty years,” says Keating of presenting the gold sovereign to Andrews. “When we surprised her in November and presented it to the 30% Club, she was very blown away by it because of the family connection.”

He describes the sovereign as a “fantastic” way to recognise those who are “helping to transform society and to achieve gender balance”.

Gender balance, he says, is something that is important to the organisation. Indeed, Bank of Ireland has set out to achieve a fifty-fifty appointment ratio by 2021. It’s an ambitious target, but one it is confident of achieving.

“In 2018, we made 400 appointments to the senior manager ranks of the bank and the split was 42/58,” he says. “It’s a step in the right direction. We’ve got more to do, clearly, but we’re very determined to make that happen.”

In the meantime, Bank of Ireland will continue to dole out the golden sovereigns to those deemed worthy recipients. Only this time it won’t signify the end of a career.

“They have an intrinsic value, but we think their symbolic value is very powerful and strong and inspiring for helping us with the progress that we’re making, that society’s making.”