Family Fortunes: Even having Beano and Dandy in the house was the ‘thin end of the wedge’ 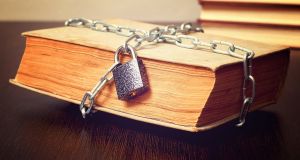 In 1954 Seán Ó Faoláin was commenting on the powers that were and their criticism of crossroad dancing, V-necks, silk stockings and “company-keeping.”

If, like me, you were born in the first half of the last century you have to some degree been a victim of the censor. In my youth it was rather difficult to get my hands on the News of the World .

As a 15-year-old, due to strict parental supervision, I was obliged to devour the exploits of The Ginger Man with Sebastian Balfe Dangerfield and his fantasies about Miss Frost, in the semi-darkness of the cow-house in remote west Wicklow.

While “the shelves of Patrick Kavanagh’s library” were the hedges of his small farm at Shankaduff, my modest book collection was kept on the wall-plates of a thatched byre which lacked diurnal illumination By the time I got my hands on Goodbye to the Hill a neighbour had moved out, his cottage was empty and I could savour the carryings on of Paddy Maguire around Ranelagh and Rathmines in relative comfort.

I have no way of knowing when I will be finished with censors but I know when it started. I was eight-years-old and it was 1954. The year that Seán Ó Faoláin was commenting on the powers that were and their criticism of crossroad dancing, V-necks, silk stockings and “company-keeping.”

To this list of debauchery was added mixed bathing and advertisements for female underwear. And either close dancing or bikinis was a passport to hell. One Sunday my mother arrived home from first Mass in Lacken with news. The curate, in a stentorian voice only a few decibels below that of a Redemptorist missioner had warned the congregation against “turning over the pages of the rags of Fleet Street.”

Despite her less than perfect eyesight, my poor mother managed to decipher the small print on the back pages of my Beano and Dandy which showed that they were printed at DC Thompson’s outpost in Fleet Street. Dennis the Menace and The Bash Street Kids weren’t actually banned from the house but my father reckoned it was “the thin end of the wedge.”

My parents were unanimous in their belief that the relatively young curate was well qualified to set the moral compass for the youth of west Wicklow. And why wouldn’t he; wasn’t his father a guard in Bray?