Hilary Fannin: You have to have two wedding dresses now, even if you’re only marrying one person 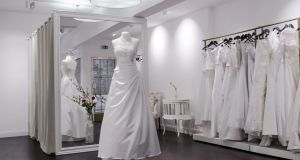 As for wedding dresses, in 2019 tailoring is key, as is ‘finding the right silhouette to suit your shape’. Photograph: istock

I recently celebrated my 12th wedding anniversary. It was a Tuesday, an unremarkable kind of day, not quite winter, not quite spring. We decided to mark the occasion by going to the pictures in the afternoon, reckoning we could have a glass of wine and a bowl of pasta afterwards and still be home in time for the Horlicks.

I walked through a section of Dublin’s north inner city to get to the cinema, past blocks of flats and pale young men on bicycles and boys in hoods flicking cigarette butts into eternity. Nearing the city centre, I passed estate agents’ boards outside spruced-up Georgian buildings; flats for sale, lots and lots of money for each square gentrified metre. Not every dwelling was on-message – I looked down at yellowing net curtains hung on a cracked basement window, at an elderly cat perched on a flaking sill.

When we married we were already boiled in the bag, we’d already had children together

When I reached the cinema, my phone bleeped. He was going to be late; something to do with trains and rain. I bought the cinema tickets, sat on the steps in the foyer and waited for him, looking out of the glass-fronted doors on to O’Connell Street, at the drizzle making mud swirls on the dirty paving stones.

I can’t imagine what it would be like to be at the beginning now, to be trying to get a foot on the ladder, whatever that overused phrase means. When we married we were already boiled in the bag, we’d already had children together and bought a home and flung things at walls and stomped and raged about a bit, and were generally engaged in beating a path through our own particular patch of overgrowth.

I’d forgotten that it was wedding season until I saw a magazine feature recently, instructing couples to make “more opulent choices” when choosing their wedding cakes. Apparently you’re not even at the races this year unless your cake features metallic touches, personalised monograms and regal piping. It seems that rippled icing and show-stopping sugar flowers are top of everyone’s “cake agenda”. (I didn’t realise there was such a thing as a cake agenda – it must be truly exhausting to have one, and desperately dull afterwards when the sugar hardens and the iced petals wilt.)

The very good news for brides-to-be, however, is that minimalists can rejoice! It has been deemed that this season’s florals should be natural, romantic and whimsical. What a relief! Why, when I married, the gypsophila had teeth that tore dreams to rags and the peonies were an uncompromising shower of blackguards.

As for wedding dresses, in 2019 tailoring is key, as is “finding the right silhouette to suit your shape” (let alone the right suit to shape your silhouette, or the right soup to slop on your suit, or the the right stiletto to pierce the throat of your suited groom).

It was getting late; the drizzle was considering turning into a downpour. A grey-haired man came through the cinema doors to escape the cloudburst. He wasn’t the one I was waiting for. At this rate, we were going to miss the ads.

Apparently you have to have two wedding dresses now, even if you’re only marrying one person: a ceremony gown and a reception dress. And you have to “nail both” to be a proper “princess bride”.

Recently, when I was purging my wardrobe, I let go of the black coat I’d worn on our wedding day. The lining of the sleeves was in tatters and, to be really honest, it had started to look a lot better when it was hanging open; breathing was kind of hard when it was closed.

As for grooms, the styles will be sharper than ever in a year that will veritably stand out for “impeccable tailoring and flawlessly fitted design”. When the formalities are over, however, the knot tied and the bill for the cake burning a hole in the pocket of his three-piece suit, the groom can, without offending the wedding-etiquette gods, remove his jacket and push up his shirtsleeves “for a cool, confident and more relaxed look”.

All this before the couple unlock the honeymoon suite and vomit into the his’n’her sinks from the sheer pressure of hyper-priced perfectionism.

He had rain on his shoulders. We went in to see a film about a couple of misfits. Outside, the skies opened.