Sean Moncrieff: Trump is unlovable. It’s just Republicans hate the other side more

Every week we anticipate the end for Trump, as if Trump is the only problem 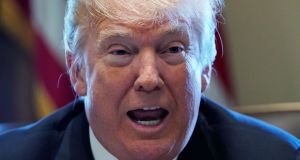 During the US presidential election campaign there was a lot of talk about child sex trafficking. On the credulous – or nutty – edges of the internet there was a firm conviction that many of the leading figures in liberal America were involved in a paedophile ring. One expression of this, in a funny-but-tragic-way was that a shadowy network (headed up by Hillary Clinton) was operating from a pizza restaurant in Washington DC.

This sad fantasy came to its climax at the end of 2016 when a man turned up at the restaurant to check out the sex dungeon in its non-existent basement. The man was armed.

But the obsession with evil liberal sex plots has survived. I’m paraphrasing slightly, but the new iteration of the theory goes like this: Donald Trump might appear to be a buffoon, but he is in fact in secret cahoots with Robert Muller to bust a child trafficking ring run by – surprise surprise – Hillary Clinton, Barrack Obama and George Soros.

On right-wing forums such as 4Chan, the Trump faithful are sharing what they construe as hints that the reckoning with Liberal America is coming soon. Any day now.

And this seems more than an attempt to convince themselves that the Trump presidency is not a steaming pile of poo; rather that Trump will still prove himself to be the best president ever.

An okay president, even a pretty good president won’t suffice: he has to be better than all the others, hence the monumental levels of invention required.

Or is this the motivation? Because it could be argued that he’s doing okay.

No, seriously. Okay if you agree with the kind of things he apparently stands for. He wanted tax cuts for wealthy people; he got them. He withdrew from the Paris Climate Agreement. Unemployment is dropping. He’s held the line on gun rights, conservative judges and opposing abortion. He might even do some sort of deal with Kim Jung Un. Among Republican voters, his approval rate is over 80 per cent. More than 50 per cent say they now support Trump rather than the party.

Of course you could argue that Republicans, rather than Trump, put these achievements in place. Trump is too busy watching Fox, tweeting and arranging his comb-over. Because he is the sort of person he appears to be – narcissistic, babyish and lazy – these traits have impeded him from doing wide-scale damage, but have given Republicans free rein. And to continue to have it, they need Trump. In the run-up to the midterms this year, Republican candidates are already attempting to appear more Trumpish than each other. If Trump doesn’t run again in 2020, it would be a disaster for the party.

The major achievement of the Trump presidency is to profoundly tribalise American politics: so much that it has insulated him from embarrassment or scandal. No matter how many women allege affairs or cabinet members he fires. No matter if he continues to be racist or xenophobic or attempts to run the White House like a personality cult, the Republican base will still view him as their guy.

By blowing his big sexist, nativist horn – pun intended – he’s prised open a crack in American society so wide that it seems unbridgeable; certainly not by old-style politics. And certainly not by the condescending tone still coming from the liberal US media. Every week they anticipate the end for Trump, as if Trump is the only problem, rather than a grotesque symptom of a deeper malaise. And the more that media pursues this obsession, the wider the gulf becomes.

Those people on 4Chan don’t love Trump. The man is unlovable. It’s just that they hate the other side so very much.

Housing crisis: What the rest of the world can teach Ireland
4