Another mountain to climb: Celine Byrne takes on Mother Abbess 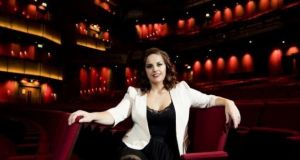 Maria Callas probably put it best: “You are born an artist or you are not. And you stay an artist, dear, even if your voice is less of a firework. The artist is always there.”

After almost two decades as one of Ireland’s best-known sopranos, Celine Byrne has one fail-safe piece of advice for opera singers: look after your mental health.

“The key to success is being happy,” she says. “Of course, it’s relative to what people visualise success to be. For me, I have a good balance between family and home, and I pay the bills doing what I love. The problems that arise with my voice have thankfully never been major issues, and any time I’m under the weather, it’s often about taking more care of my mental health.”

Famously, Byrne had been working as an 18-year-old au pair in Milan when she encountered her first opera. Thinking that she had “died and gone to heaven”, her trip to see La Scala proved a fortuitous one. In time, Byrne would become one of Ireland’s foremost sopranos, performing extensively in Europe, the US, China, Russia and Mexico. Best known internationally for her collaborations with renowned tenors José Carreras, Roberto Alagna and Joseph Calleja, Byrne made her operatic debut as Mimi in Scottish Opera’s production of La Bohéme in 2010. In the years since, she has performed at Carnegie Hall and the Royal Opera House in Covent Garden.

“I was 18 and didn’t know what I wanted to do at school,” she recalls. “I didn’t play an instrument or anything. The world of opera was so alien to me, but I just knew, ‘I want to do that’. Once you’re immersed in everything, you can get an understanding of it. There’s always been this idea that if [opera] is in a foreign language, you won’t understand it, but my kids don’t speak a foreign language and they love the art form. It’s the drama and music that takes over.”

The Bord Gáis Energy Theatre’s stage is one that the Naas native is more than comfortable on, not least as she is a regular addition to producer Simon Walton’s productions (including this year’s Carmen, in which she played Micaela in an emotional delivery). Next month, Byrne moves into her residency there (“in inverted commas”): “That’s me doing my thing, singing from the world of opera and a handful of Christmas favourites.”

Before that, Byrne’s illustrious career will edge in a slightly different direction. She will play Mother Abbess in The Sound Of Music, opposite Dubliner Lucy O’Byrne’s Maria. It’s a chance for Byrne’s fans to appreciate her non-operatic talents, but this is far from her musical debut.

Long before that fateful summer in Milan, Byrne had been cultivating a taste for the stage. She grew up in a sporty household. Her mechanic dad, John Joe, played GAA for Kildare and she played camogie as a youngster.

“I was a very hardy girl,” she laughs. “I didn’t grow up with ballet lessons, or the flute or violin lessons. I grew up getting bags of turf. Still, I always loved singing. It was a form of escapism and I immersed myself in it.

“I’d done amateur musicals with the Naas Musical Association as a teenager – my very first was My Fair Lady,” she recalls. “I won an AIMS (Association of Irish Musical Societies) award for Best Singer and Best Overall Performance, and winning that award was a huge thing for me. I always loved musicals and wanted to get my voice trained.”

The Sound Of Music, too, has long had an exalted place in Byrne’s affections.

“I used to love going to the ‘sing along’ events in the Gaiety,” she recalls. “The funny thing is I wanted to be a nun when I was 14. But I met my husband around then, so that was a very short-lived thing.”

“He was my first kiss but I wasn’t his, which kind of annoys me,” she has previously said. The pair officially got together at the local disco when Byrne was 18, by which time she had encountered a “few frogs”.

Within months, the couple moved in together and soon found they were expecting their first child, Noel (18). He was born when Byrne was 19, and she says that his birth inspired her to start singing lessons with Mary O’Sullivan at the DIT Conservatory of Music and Drama in Dublin. During her undergraduate studies, when she studied with Edith Forrest, Deborah Kelleher and Trudi Carberry, Byrne gave birth to her daughter Ciana (15). Cillian (11) arrived while Byrne was doing her master’s at the Royal Irish Academy of Music, where she studied with Dr Veronica Dunne and Dearbhla Brosnan and received the RIAM award for outstanding achievement.

I got to shake Barack Obama's hand, look him in the eye, dream about him for an instant and then move on

Being a wife and mother, she says, is the most fulfilling thing in her life.

“I’m an opera singer and that’s my profession, but it was my vocation to be a mum,” she says. “I was at home all the time when they were babies, and when they got a bit hardier I could devote more time to building my career. If ever I was travelling and missed my family, I’d have to tell myself, ‘this is the life and career I chose’. When I’m at home, they have me 100 per cent, totally.”

In recent months, the Irish opera scene has enjoyed a recharge thanks to a new partnership between Opera Theatre Company and Wide Open Opera. As part of the Arts Council’s new opera policy, the two organisations will merge in the months ahead to form a single company. The agreement means the return to the Dublin stage, after a gap of eight years, of regular Irish productions of the great operatic repertoire. The hope among performers is that it will provide a gateway into opera for Irish people of all ages.

“If it’s there, the hope is that people will watch and follow it,” says Byrne. “It’s like in Russia, where ballet is to the fore – they grow up doing it. It’s not our culture. Here, our tradition is more music and dance. My hope is that younger people will get the chance to see a different side to it.”

For Byrne the opportunities to travel and perform have resulted in some interesting collaborations. Byrne has shared a playbill with artists as diverse as Imelda May, Gavin James and Nicole Scherzinger (the latter was a special guest at Andrea Bocelli’s Dublin concert at the 3Arena last year, when Byrne performed in support).

“Nicole has done a lot of musicals herself,” notes Byrne. “She’s a really funny woman who is exactly the same way in real life.”

Singing for president Barack Obama was another matter entirely: “I got to shake his hand, look him in the eye, dream about him for an instant and then move on,” she laughs. “It was a short-lived romance that lasted four seconds. I’ll tell you, he’s a fine thing.”

1.   Julie Andrews very nearly turned down the role of Maria, as she felt it was too similar a project to Mary Poppins, which she starred in the previous year.
2.   Blink and you’ll likely miss her, but the real Maria Von Trapp, who penned the memoir that the musical is based on, appeared as an extra in the film.
3.   Christopher Plummer was reportedly so aghast at being involved in the musical that he needed a drink or two before he made it to set.
4.   The oldest child of the real Von Trapps was not lovestruck, 16-going-on-17 Liesl, but a son called Rupert, who was 54 by the time the film was released. The Von Trapps toured the US from the mid-1940s until the mid-1950s, becoming record label Columbia’s most successful choral group and making an appearance on an Elvis album.
5.   Edelweiss was the very last song Oscar Hammerstein II ever wrote: Plummer allegedly disliked the song so much he campaigned for it to be removed from the movie.