Family Fortunes: an unassuming country lad from Mentrim, near Ardee, Co Louth, he had an absorbing interest in nature, animals, fossils and suchlike 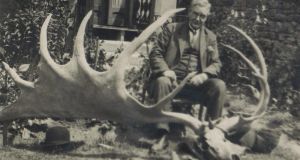 My cousin, Richard Flatman, was a resourceful and tireless researcher of his family history. It is thanks to him that I now have (and cherish) considerable documentary information on the life and work of the man in this picture: our grandfather, James Michael Duffy (1861-1934).

But Richard, who sadly died last year, was too young to have known Grandfather personally. For me however, at 90 years of age, there is much in this picture to stir up fond and deeply nostalgic memories.

Firstly of course, there is Grandfather himself, confronting the camera – and now all of us – with his modest smile and kindly eyes. Perhaps on this occasion, there is also a hint of understandable pride and pleasure behind the glint of those spectacles. The bowler hat (lying on the grass), the buttoned-up waistcoat with watch and chain, the breast-pocket handkerchief, would all have been typical of his daily apparel.

Then there is the setting: Grandfather’s beloved back garden at 70A Upper Leeson Street. It’s nice to be reminded of the clusters of house-leeks growing along the top of the splendid stone wall. And in the background, aren’t those Dahlias, flowering away happily in their dedicated patch? Dahlias were a specialty of Grandfather’s. He was even said to have bred new varieties of them and to have named one of those after his youngest daughter, Sheelah (Richard’s mother).

But of course Grandfather and his house and garden are all diminished to Lilliputian proportions by the presence in the foreground of the skull and antlers of a giant Irish deer. And many readers who immediately recognised these and connected them with Dublin’s Natural History Museum, are obviously due an explanation as to what these prehistoric remains should be doing in a 20th-century suburban garden.

Grandfather, originally an unassuming country lad from Mentrim, near Ardee, Co Louth, with an absorbing interest in nature, animals, fossils and suchlike, in June 1885 was offered and accepted a full-time post as Attendant in the Natural History Museum. He was to remain there for the rest of his working life, retiring (with the rank of Head Attendant) in March 1929.

Because of his life-long interests, already mentioned, he was in his element in his Museum situation, ever increasing his own knowledge and understanding and putting it at the disposal not only of museum visitors but of researchers and medical and veterinary students. When the museum opened a Students’ Room, he was put in charge of it.

But there was a totally other side to his official museum work and to his contribution to the Museum’s history. In a period when archaeological exploration of caves and other sites was at a peak, bones of ancient animals started to flood into the Museum at an unprecedented rate. The Museum’s smallish specialist staff found itself stretched beyond its limits by the task of processing the finds.

Attendant James Duffy’s expertise in these areas, although self-acquired, was widely acknowledged. As the Belfast-born naturalist AW Stelfox, in his substantial obituary for Grandfather, was to put it: Duffy “had acquired an amazing knowledge of bones”.

Small wonder then, that Grandfather should now be called upon to assist with such work as sorting and identifying the bones, reconnecting them where they had become separated, and presumably repairing them where broken. Years later the famous Lloyd Praeger in his book Some Irish Naturalists felt compelled to devote a complete entry to Grandfather and his successful work, work that would not only extend beyond the museum walls and into the field, but even into his own back garden.