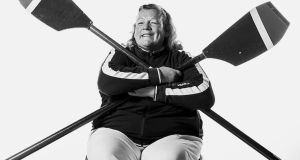 Angela Madsen was a healthy young marine who was playing basketball when she suffered a serious back injury in 1981. When she had back surgery a dozen years later, at 33, she woke up paralysed from the waist down. She lost her job, her partner cleaned out her bank account and left her, and for a time she lived on the streets, sleeping in her wheelchair in front of Disneyland.

But her story did not end there.

A natural athlete, she eventually took up rowing and joined competitions. She started winning gold medals at world rowing championships and competed in the Paralympics. She then set her sights higher: to row the oceans. She conquered the Atlantic (twice) and the Indian Ocean and circumnavigated Britain, all with rowing partners or a team.

In 2013, she attempted her biggest challenge: rowing the Pacific solo, from California to Hawaii. But she got caught in a ferocious storm and had to be rescued. The next year, she made the trip with a partner. But she still yearned to do it alone.

Finally, this spring, she set out by herself, leaving Marina del Rey in Los Angeles on April 24th in her 20-foot-long state-of-the-art fibreglass capsule, Row of Life. She planned to land at the Hawaii Yacht Club in late July.

Others have made the journey solo. But Madsen aimed to be the first rower with paraplegia, the first openly gay athlete and, at 60, the oldest woman to do so.

She was two months in and halfway to Hawaii when she discovered a problem with the hardware for her parachute anchor, which deploys in heavy seas to stabilise the craft.

She had been in constant contact with her wife, Debra Madsen, in Long Beach, California, by text and satellite phone, and Angela was posting pictures and observations on social media for those following her voyage. Debra said in an interview that when she warned that a cyclone was coming, Angela knew she had to fix the hardware, which would require tethering herself to the boat and getting in the water.

“Tomorrow is a swim day,” Angela posted on Twitter on Saturday, June 20th.

On Sunday, there were no messages from her. As the day wore on, Debra grew more worried. She could tell from tracking data that the boat was not being rowed. Around 10.30pm local time she texted Angela that their friend Soraya Simi, who is making a documentary about Angela, was calling the coast guard.

Around 8pm Monday, the coast guard spotted her in the water, lifeless and tethered to her boat.

The plane couldn’t land. But the coast guard had already diverted a German-flagged cargo ship, en route to Tahiti from Oakland, to retrieve her. The ship was able to recover Madsen’s body on Monday night, but not her boat. The ship reached Tahiti on Tuesday.

Debra Madsen said she may never know what happened, unless Angela, who was keeping a video diary, had turned on one of her cameras.

She said Angela might have been caught in her tether, or developed hypothermia without knowing it. She might also have had a heart attack or other illness.

The answer may lie in the boat, still adrift in the Pacific. Debra is trying to arrange for its retrieval, which will be costly, and for Angela’s body to be transported to Hawaii for cremation and burial at sea with military honours.

“I want her to complete her journey,” she said.

Angela Irene Madsen was born on May 10th, 1960, in Xenia, Ohio. Her father, Ronald, sold cars, and her mother, Lucille (Sibley) Madsen, was a homemaker.

With one sister and five brothers, Angela grew up learning to fight and play sports. All that was put on hold briefly when she became pregnant as a high-school junior. A daughter, Jennifer, was born in 1977, and Madsen graduated in 1978.

She enlisted in the marines in 1979 and was stationed in El Toro, California, as a military police officer. She was able to keep her daughter with her.

At six feet one inch tall, Angela excelled at basketball and played for the marine corps women’s team. During practice one day, she fell forward and someone stepped on her back. She had two ruptured disks and a damaged sciatic nerve and for a time could not walk.

With therapy, she slowly recovered. She found work as a mechanic in the Sears automotive department and later at U-Haul. But she could not keep up such physically demanding work and took a desk job as a mechanical engineer.

Then in 1992 she broke a leg and some ribs in a car accident. Already suffering from spinal degeneration from the basketball injury, she had corrective surgery the next year, which left her with both legs paralysed.

After the surgery, the woman who had been her romantic partner for four years left, saying she “did not sign on to be with someone in a wheelchair,” according to Madsen’s memoir, Rowing Against the Wind (2014).

The partner took her car, her disability cheques and her savings, Madsen wrote. With no money for rent, she was evicted. She stored a few possessions in a locker at Disneyland and lived on the streets with her dog for a couple of months, until she was helped by the Paralysed Veterans of America.

“When I celebrated my 34th birthday on May 10, I found myself wishing I had never been born,” she wrote. “My weight had ballooned up to 350 pounds, which made me feel more immobile than ever.”

Then came an accident in the San Francisco subway in which she plunged headfirst from her wheelchair on to the train tracks. It left her with a mild brain injury but led her to realise that she had more to be grateful for than sorry about, and she resolved to shape her own destiny.

“I stopped being a victim and started taking responsibility to retrain, re-parent or reprogramme myself,” she told Trekity, an online travel newsletter for women.

“It does not mean that bad things no longer happen to me or that I am not victimised by people or that my life is easy,” she added. “I just improved my coping skills and took myself to another level.”

Always athletic, she turned to competitive sports. She got involved with the Veterans Wheelchair Games, and in 1995 won three gold medals: in swimming, the wheelchair slalom course and billiards.

By 1998 she had discovered adaptive rowing for athletes with physical disabilities, and by 1999 she had joined her first ocean rowing regatta.

It was as if this multitalented athlete had finally found her sport. Ocean rowing gave her the chance to compete against people without disabilities, and she relished the challenge and the freedom from the mundane aspects of daily life.

But mostly, she loved being out on the wide blue expanse.

Even cancer and a double mastectomy did not slow her down.

She trained, raced, coached and surfed, as a 2015 documentary on her achievements makes clear. She founded the California Adaptive Rowing Program. She won four gold medals with the US rowing team at the world championships and competed in three Paralympic Games, winning a bronze medal for the shot put in London in 2012.

She met Debra Moeller, a social worker, in 2007 when Debra brought a disabled and abused child to Angela’s adaptive rowing programme. They married in 2013.

“Angela was a warrior, as fierce as they come,” Debra Madsen and Simi wrote on the website RowOfLife. “She knew the risks better than any of us and was willing to take those risks because being at sea made her happier than anything else. She told us time and again that if she died trying, that is how she wanted to go.”