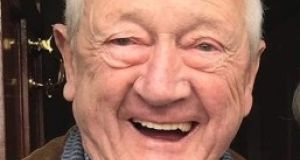 Bill Taylor was a hard worker with a lifelong love of learning and teaching, and a sportsman who put as much effort in on the field as he did in the office, winning medals as a minor footballer for Dublin, and playing soccer for Bohemians. “Being in goal was the most appropriate place for Bill, as he never took his eye off the ball in any aspect of his life,” his daughter Helen says.

Bill was born to Pearl and Albert Taylor on April 4th, 1934, in Athlone, Co Westmeath, an elder brother to Tom and Dermot. Albert died when Bill was just four, leaving his mother alone with three very young sons. The family uprooted to Botanic Road in Dublin, where Pearl had family. She went on to become a fashion designer in Arnotts, where she made ball gowns and wedding dresses for many of Dublin’s socialites, including members of the Guinness family.

The family moved to what became known as their “happy house” on Connaught Street in Phibsborough, and Bill attended school in Iona Road and then St Vincent’s CBS. He went on to study for a BComm in UCD at night, while working in Dublin Port during the day.

Bill ended up spending most of his working life in Dublin Port, mainly in PR and marketing. He was awarded a master’s from the Irish Marketing Institute. He finally retired from the port in 1996, but spent a further 20 years volunteering at St Andrew’s Resource Centre on Pearse Street. Bill’s love of learning and teaching never left him, and over the years he lectured at the Institute of Public Administration, the College of Commerce in Rathmines and the Irish Institute of Transport, of which he became a fellow.

He also played badminton, which led to him meeting his wife-to-be, Fionna, in the International Badminton Hall on Whitehall Road in 1959

Bill had many sporting interests outside of the office. He played cricket, Gaelic football and soccer for Bohemians. Having won various medals playing for the Dublin minors, he became a founding member of Na Fianna GAA club in 1955.

He also played badminton, which led to him meeting his wife-to-be, Fionna, in the International Badminton Hall on Whitehall Road in 1959. She was looking for a mixed-doubles partner, but got a lot more than that when her father picked Bill to partner her on the court. They married in October 1962 and moved to Glasnevin, where they raised four children, Susan, Mary, Garrett and Helen.

This house was always the place where their friends hung out as everybody was welcomed by Bill and Fionna. Both loved the company of friends, family and neighbours.

Bill had several bouts of pneumonia in the latter years of his life, so when he tested positive for Covid-19 in April, his lungs weren’t strong enough to beat it. He died on Holy Saturday, April 11th.

The family drove themselves in three cars adorned with black flags so they wouldn’t be stopped by gardaí on the short drive to Our Lady of Victories church for the small funeral service.

“That cavernous building should have been full to the rafters with people who would love to have said a proper goodbye to an old friend or family member – there are in-laws, cousins and godchildren who were unable to attend due to the Covid restrictions,” his daughter Helen says.

Instead it was just the family, including a video call with one daughter and her family living in the UK. Fionna had also tested positive for Covid, so none of the family could hug her.

“Some day in the hopefully not-too-distant future we will hold a proper memorial for Bill, with all the people who loved him in attendance. That is going to be the party that Bill would want and we’ll make sure he gets it.”