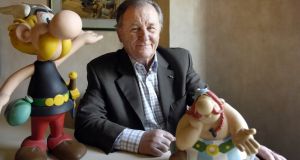 Albert Uderzo, a co-creator of Asterix, one of France’s most revered and longest-running comic book series, died on Tuesday at his home in Neuilly-sur-Seine, a suburb of Paris. He was 92.

His death was confirmed by Dargaud, the former publisher of the Asterix comic books. Bernard de Choisy, Uderzo’s son-in-law, told the Agence France-Presse that the cause was a heart attack.

Uderzo and the writer René Goscinny created Asterix in 1959, filling the series with puns, regional stereotypes and anachronistic references to French culture as it followed the adventures of its main character, an ancient Gaul named Asterix, a mustachioed figure in a battle helmet.

The series is joined perhaps only by Tintin and Mickey Mouse in the pantheon of comic-book and cartoon characters with uninterrupted universal appeal. In 1966, France’s first space satellite was named Asterix.

The series has been translated into more than 100 languages and dialects and has sold more than 380 million copies since its debut, according to Les Éditions Albert René, the company owned by Hachette that holds the rights to the series. It has spawned animated cartoons, live action movies and its own theme park, outside Paris.

“It’s a puzzle to me why Asterix happened the way it did,” Uderzo said in an interview with the New York Times in 1996. “René and I had previously created other characters with as much passion and enthusiasm, but only Asterix was a hit.

“I think it’s perhaps because everyone recognises himself in the characters,” Uderzo added. “The idea of the weak who defeat the strong appeals. After all, we all have someone stronger lording it over us: the government, the police, the tax collector.”

Drawn by Uderzo in an exaggerated style – with overblown physical attributes such as bulbous noses – the series features a village of unruly Gauls resisting Roman dominion in 50 BC with the help of a magic potion that grants superhuman strength.

Uderzo and Goscinny, who met in 1951, worked at a frenzied pace, collaborating until 1977, when Goscinny died of a heart attack. Uderzo took over the series and retired in 2011. Some critics said the quality of the writing dropped after Goscinny’s death, but the series’ success continued unabated.

Goscinny’s daughter Anne Goscinny told Le Parisien newspaper on Wednesday that the two were like “brothers”.

“They were as different as fire and water, but they lived something that few of us will be able to live,” she said.

She survives him, along with Uderzo’s wife, Ada Milani; his brother, Marcel, who is also a cartoonist; and several grandchildren.

Alberto Aleandro Uderzo was born on April 25th, 1927, in Fismes, in eastern France, with 12 fingers but an operation fixed the anomaly.

Uderzo grew up in the Paris area, the son of Silvio Leonardo Uderzo, a carpenter, and Iria (Crestini) Uderzo, both Italian immigrants. He quickly took to drawing.

As a young man, Alberto was an assistant to an instrument maker, a welder and then an illustrator in an animation studio. He created his first comic characters, for a youth magazine called OK, in 1946. Uderzo, who counted Walt Disney as one of his biggest inspirations, told the newspaper Le Monde in 2017 that “the Americans taught me how to draw”.

After his mandatory military service, Uderzo drew illustrations for French newspapers before being hired as a cartoonist in the Paris offices of a Belgian agency that distributed comics. It was at the agency that he met Goscinny.

In 1959, Uderzo and Goscinny were part of the team that created Pilote, a new youth magazine that would go on to feature some of the era’s most talented French and Belgian comic book artists.

François Clauteaux, the creator of Pilote, wanted a comic book series that would be deeply French and stand out in an era of invading American comics, Uderzo told Europe 1 radio in 2008.

Uderzo and Goscinny initially thought of adapting the Roman de Renart, a series of medieval fables featuring anthropomorphic characters. But someone else had already taken the idea, and, pressed for time as the deadline for Pilote’s first issue loomed, the pair had an idea.

“What is more French than our ancestors the Gauls?” Uderzo said. “Within 15 minutes we had imagined everything: the druid, the bard, the names that end in ‘ix,’ because of Vercingetorix, of course.” – New York Times