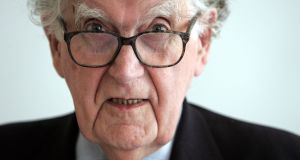 Maurice Hayes: He had a great love and knowledge of literature, and with a photographic memory could quote his favourite poets and writers

Coming out of midnight Mass in Bryansford on Sunday night, P J McElroy spoke to journalist Dan Keenan about fellow Co Down man Dr Maurice Hayes who died the previous day aged 90. “I wouldn’t have my all-Ireland medals but for Maurice,” he said.

McElroy was part of the great Down team that won the All-Ireland football finals of 1960 and 1961, the first team from Northern Ireland to achieve that distinction. And Hayes was central to that achievement.

For more than 60 years Hayes had a distinguished and varied career in public service. His significant contribution to Irish and Northern Irish society spanned local government, the civil service, the peace process, policing and the arts.

But sport was also important, particularly the GAA. Hayes, a former Down hurler, said he learned more about managing and motivating people while secretary of the Co Down GAA board than anything else he did.

In the mid- to late-1950s he led a small coterie of officials who, with great foresight, ingenuity and dedication, spearheaded a five-year plan to win the Sam Maguire for Down. They brought the structure, vision and ideas that are central to modern sport to Down football, realising their goal in four years.

Hayes said that Down always was a team more interested in “football than flagwaving”. Unlike many others in officialdom throughout the GAA at the period, he opposed the ban on foreign games. He applied to be general secretary of the GAA even though he knew full well that with such views he had no chance. He said he took perverse pride in receiving just one vote – and that one not from the Co Down delegate. He applied for the post “so that I could say to myself that I had made my effort to change things”.

And that was fundamental to his life’s work – making the effort to change things for the better, to bring communities together, to build a more harmonious society. If he did not succeed in liberalising the GAA at that particular time he influenced and changed life and attitudes in numerous other aspects of life.

Hayes was a sort of Northern Ireland sage, a man of great wisdom and erudition, an Irish speaker, a “not very conventional civil servant” – as he called himself – who cut through red tape, who held to the middle ground, who sought solutions through diplomacy, negotiation and mediation, and who kept faith with the benign potential of humanity even when the evidence pointed to human malignity having the upper hand.

In his 1995 memoir Minority Report he captured the broad sweep of his involvement in public life that stretched back to the “antediluvian regime” of unionist prime minister Lord Brookeborough, on to the “reformist tendencies” of Terence O’Neill, and through a range of British secretaries of state for Northern Ireland, starting with William Whitelaw in 1972.

“I have seen and worked through an era of new-town expansionism,” he wrote, “through civil rights agitation, through internment, Bloody Sunday, Bloody Friday, bloody every day, politically-motivated stoppages, hunger strikes, political talks, talks about talks and the failure of talks, through the terrorisation and intimidation of whole communities, evictions and segregations, bombs, bullets and mayhem…”

Following publication of that book he further saw Northern Ireland begin to emerge from decades of conflict with the 1998 Belfast Agreement, and shortly thereafter as a key member of the Patten commission he helped bring about reform of policing and the transformation of the Royal Ulster Constabulary (RUC) into the Police Service of Northern Ireland (PSNI).

For good reason his reflections were sub-titled Experiences of a Catholic Public Servant because as he also wrote in that memoir he found himself “very often the only, and sometimes the first, Catholic at my rank as I progressed through the civil service”.

Hayes was born in Killough, Co Down, in 1927 from a fairly well-to-do Catholic family. A twin and one of six children, he was educated in St Patrick’s High School in Downpatrick and Queen’s University, Belfast, where he gained an honours degree in English. The first three years of his degree course were spent as a clerical student based in St Malachy’s College in north Belfast. He found Queen’s a “dull and earnest place” with few exciting lecturers, although years later he served on the college’s ruling senate.

He taught English for a while in his old school in Downpatrick. His civil servant career began in 1955 when he was appointed town clerk of Downpatrick, a role he continued in until 1973. In 1969 he was appointed the first chairman of the North’s Community Relations Commission.

He was the first Catholic Northern Ireland ombudsman, and first assistant secretary to the 1974 Sunningdale powersharing executive before it was brought down by the Ulster Workers Council strike and a combination of loyalist and republican paramilitary violence. He was also permanent secretary of the department of health and social services.

His friend, Canon Sean Rogan, who officiated at his funeral Mass, said Hayes was “at ease with pauper, peasant, poet, president or prince”. He was courteous, witty, a little mischievous and the best of company, and put people at their ease whatever their background.

He liked and was impressed by Brian Faulkner, chief executive of the ill-fated Sunningdale executive, and also one of its ministers John Hume. He was also familiar with what he described as Ian Paisley’s complex personality, memorably saying about the late DUP leader and first minister that “there are about six Ian Paisleys. Two of them are very nice people, two are quite awful and the other two could go either way.”

He decided against suing Paisley after his Protestant Telegraph described him as a man more dangerous than the IRA to the interests of Protestant Ulster. Paisley subsequently apologised, saying while nominally in control he did not have day-to-day running of the paper.

Hayes said that Paisley, while a rabble-rouser, never told him a lie and never breached a confidence, and he wasn’t as surprised as many others when Paisley decided to share power with Sinn Féin in 2007.

Aside from his public face Hayes also worked behind the scenes to facilitate progress in the peace process. Historian Prof Paul Arthur, who in the 1990s was involved in bringing unionist and nationalist politicians together at private seminars in the US, France and South Africa – later expanding those confidential gatherings to include loyalist and Sinn Féin politicians – said Hayes through the Ireland Funds, which he chaired and which were created by Sir Anthony O’Reilly and Dan Rooney, quietly provided finance for those meetings.

He encouraged republicans and loyalists to take the course of peace but abhorred the waste and horrors of the Troubles. He said that the “one thing that should not be allowed is the glorification in song or story of what was mean and nasty and dirty”.

He had a great love and knowledge of literature and with a photographic memory could quote his favourite poets and writers such as Seamus Heaney, Michael Longley, Gerard Manley Hopkins, James Joyce and William Shakespeare. He loved too the nonsense verse of Edward Lear.

The flyleaf of Minority Report has a dedication to his beloved wife of 50 years Joan and a quote from Brian Friel’s Translations – “confusion is not an ignoble condition” – a useful adage for Irish public life.

He was also a member of the Northern Ireland Arts Council and the BBC general advisory council. His home in Downpatrick was stacked with books – Prof Arthur said he was “frighteningly well read”.

In 1997 former taoiseach Bertie Ahern appointed him to the Seanad, where he served two terms. In the South he also chaired the Forum on Europe and conducted a review of scandals at the radiology department at Tallaght Hospital. He sat on various boards.

He was a deep and spiritual and ecumenical man. His last request, as Canon Rogan explained at his funeral Mass, was that he be interred near Down Church of Ireland Cathedral in Downpatrick. Through the good offices of Dean Henry Hull that is where he was buried, resting on the Hill of Down, where it is said “in Down, one grave three saints do fill – Patrick, Brigid and Colmcille”.

Few would disagree with the assessment of Hayes by Canon Rogan. “Maurice Hayes was a giant who strode the stage of life in so many and varied roles – but always the same Maurice of integrity, honesty and humility.”

Hayes is survived by wife Joan and their five children Clodagh, Margaret, Dara, Garrett and Ronan and their families.