My grandfather’s 1930s taxi ledger and the IRA fare

Family Fortunes: Tuam taxi driver recorded every fare, who they were and where they were going 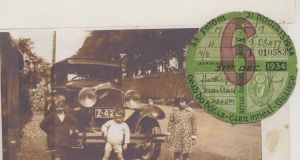 Michael McGrath with his brother Denis and sister Vera, proudly posing with their father’s car 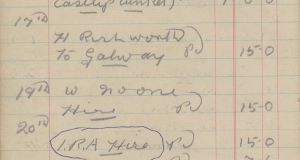 I have just been gifted, by my 87-year-old dad, my late grandfather Bill’s ledger (1933-1938) from his time as a taxi driver in Tuam, Co Galway. He was a meticulous record keeper, his day-book covers everything.

He records in great detail all his fares, who they were, where they were going, how much they paid and often, the purpose of their journey. He also listed in detail his expenses, fuel costs, breakdowns and his forced spells of inactivity. One can only wonder how he managed to provide for his family of 11 children while he was forced to rest with a bout of influenza. I’m quite certain his beloved Vauxhall wasn’t equipped to protect him or his passengers from the biting cold and westerly winds and this would have taken its toll on his health.

Thumbing through his journal, it’s clear Bill was well up to speed with the important happenings in and around Tuam during his time on the road. Some of the fares recorded include multiple bookings by the “sugar beet committee”, trips to and from Tuam by the “ITGWU” trade union and some political trips, Fianna Fáil’s “M Killilea” included, are recorded, all marking the early days of Tuam Sugar Factory in its development. It was the biggest story of the time in the area, and probably sadly is to date. Weddings and funerals are noted. Emigrations are obvious by either being noted as such or by the “one way” nature of the trip to the port. Incredibly, Bill has detailed a car hire on February 20th, 1938 as “IRA” 15 [shillings], “paid”. A sign, perhaps, that the transition of power to Fianna Fáil brought many of the volunteers in from the cold of secrecy.

The state of Bill’s affairs was reflected in his clear and carefully filed records in the early years. His neat and careful hand-writing gradually became ever so slightly untidy, showing some signs of stress as the “credit given” column escalated and the terms of inactivity due to illness increased.

Bill bought his first car on March 21st, 1933 for £75. He “handed in” his third car on Good Friday, 1938. Bill could have written a book about what he witnessed during that time. Oh wait, he did. I have it. It’s both a treasure and a sobering record of “interesting times” – a code for tough times as we all well know. Bill moved on from taxi-driving to a career at the pumps of Abbey Service Garage and then a long and happy retirement.