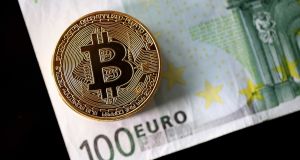 What exactly is bitcoin and how can I make a packet from it? Photograph: Dan Kitwood/Getty Images

Twenty eighteen is nearly upon us and people are busy purchasing pristine day planners and trendy athleisure gear in the vain hope that they will inspire them to become better people. Yes, it’s the season of the New Year’s resolution, a time of year when people vow to change for the better and earnestly spout Oprah-isms about living their best life. While many resolutions are centred around health, exercise and well-being, I prefer to keep mine more manageable and small-scale.

With that in mind, here are my resolutions for the next twelve months.

1. Commence womansplaining as a means of counteracting mansplaining. Here is how it will work: each time a man tries to mansplain, say, sexual harassment or gender discrimination in my presence, I shall confidently womansplain parts of the male experience that I know nothing about. Like how to hang a Scarface poster in the front room, for instance.

2. Stop going on Penneys splurges and justifying it as “self-care”. Related: consult accountant and find out if one can avail of some sort of self-care tax relief.

3. Watch Love Island. One of my biggest regrets this year was not watching Love Island from the beginning and struggling to keep up with who or what exactly Montana was. This year, my aim is to get invested from the jump so that I don’t feel left out of conversations, in-jokes and memes.

4. Start putting more of an effort into my porridge’s appearance. At present, my porridge’s appearance could best be described as, “Sure, who’d be looking at me anyway?” It has nothing on the photogenic porridge bowls I see on Instagram, adorned with berries, sliced banana and twinkling pomegranate seeds. An Off The Rails-style makeover is well and truly in order.

5. Stop saying ‘sorry’ so much. If Kevin Spacey can’t apologise for sexual assault, I don’t need to apologise profusely for not having the 10c when something costs €5.10.

7. Narrowly avoid a nip slip. I’ve been carefully and consciously avoiding nip slips for far too long. It’s time to dance with danger, my friends. After all, do I really want to end up on my deathbed regretting the fact that I never experienced the adrenaline rush of a nip slip averted at the last possible minute? No!

8. Approach life with the self-assurance of a Tory politician who insists on calling it “Southern Ireland” but nonetheless feels qualified to discuss the impending “presidential election” in the Republic of Ireland.

9. Take up Crosaire so that when I eventually die, people will eulogise me by remarking on how I completed it every day. “She did the Crosaire every day, not a bother on her,” they’ll say. “So bright, so mentally agile.”

10. Start actually reading all those longform articles about President Donald Trump instead of merely scanning through them to find a damning paragraph I can screenshot and share on Twitter.

11. Accept the fact that I’m now rather fond of Ed Sheeran’s Galway Girl and there’s nothing I can do about it. Sure, it may border on cultural appropriation and, yes, I feel physically ill by the thought of consuming “some Doritos and another bottle of wine” after all the drinking that takes place in the song, but what can I say? It’s a banger destined to be enjoyed at weddings for decades to come. Don’t fight it. Lean into it.

12. Preface every statement of condemnation with a simple “As the father of daughters” fact about myself to illustrate my humanity and compassion eg “As the daughter of a father…”, “As the owner of a Boots Advantage Card…”, “As someone who once met Mickey Joe Harte in a Golden Discs…”

14. Cease asking the question, “Anyone for a cup of tea?” with the expectation that colleagues will be too polite to say yes. Become open-minded to the idea of making tea for others and stop quietly resenting those who take me up on my generous offer. “Jammy bastard wants a splash of milk, does he? I’ll give him a splash of something, all right.”

15. Find out what (a) bitcoin is and (b) how I can make money out of it before the arse falls out of it. Sample Google search: “Is bitcoin a scam and how much will €20 get you?”

16. In a similar vein, I would like 2018 to be the year I become really good at scratch cards. My goals are modest. I just want to be able to post a photo of a winning scratchcard with three matching €80 symbols and write, “Yeow, drinks are on me!” (Without having to buy anyone drinks, obviously.)

17. Go to The Darts. Every Christmas, I watch The Darts in Alexandra Palace – yes, The Darts is its full name – and think, “That looks like a jolly old time. I must go next year.” And every year, I completely forget about my plans and feel pangs of jealousy watching darts fans wave “WENGER OUT” signs and spill lager on themselves. I will arise and go now, and go to The Darts.

19. Get really into André Rieu – or Continental Mick Wallace, as I call him – so I can finally enjoy the seemingly endless volume of Rieu content on Sky Arts and get my money’s worth. André Rieu: Home for Christmas! André Rieu: Christmas Around The World! André Rieu: Making The Magic!

20. Acquire fancy adult glassware so I never have to endure the shame of drinking wine from a novelty Club Milk mug again while in the presence of other adults. It’s the little things.