Memory is an unreliable friend, a drunk in a bar

Hilary Fannin: 2017 was a tough year for me. Here’s what I think I remember of it 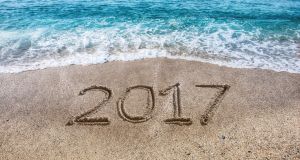 As the tide goes out on 2017, what do we really remember about the year just gone?

Another year over, a new one waiting in the wings.

I generally quite like this time of year, this interregnum, this backwater between Christmas and New Year. I like the pink and yellow sunsets, which seem to scoff at our puny, domesticated attempts at festive illumination. I like the bare trees, and the stillness of the estuary near where I live, and the squadrons of geese that tattoo the sky and are reflected on the water’s mirrored surface. I like the quiet-pint atmosphere you might stumble across on a cold afternoon in some firelit pub. I like the clock tick and log spit that your walking boots lead you to, as if drawn to a dewy glass by some instinct of their own.

I like young girls’ weariness with party shoes. I like that people eat sandwiches in front of the telly in unmatched pyjamas. I like cold stuffing and hot tea. I like having time to thread the reels and look back over the year that’s gone; a tough year for me and my extended family, a hard year for many of us, I suspect.

I like, at this end of the fading year, to settle, to compose myself, to take a breath, to focus on a handful of frames and revisit images of the past 12 months. I like, with the clarity of hindsight, to look again at the spooling and unspooling narrative of life, and commit those memories, those scars, to the vaults.

I remember returning home three days before my mother’s death, and realising that she no longer knew me

But memory is a tricky, quixotic friend. Memory is moody and unreliable. Memory forgets. Memory is a downright liar. Memory is a country with an inhospitable weather system and some very dodgy politics. Memory is a drunk in a loud bar: one minute you’ll be held in her sentimental embrace, the next she’ll have a broken glass at your jugular. And even though you know that as soon as you turn off the cutting-room lights, memory will rearrange itself, you know too that memory is all we have.

I remember sitting in my aunt’s house in late summer, the house my grandparents first occupied in the 1930s, the house where my mother grew up. My aunt had become the keeper of stories, the receptacle for family memories. A clear-headed, intelligent woman, she was the last of a generation being erased by time.

When I was leaving, we arranged to talk in earnest in the coming weeks. She had, she said, much more to share. I left, telling her to take care of herself, as she hadn’t been feeling well. I walked lightly down the road towards the sea, looking forward to my return.

The next time I went to her house, she had gone. I remember standing in the garden, momentarily unable to step inside. I looked up at a crushed grey sky, wished I could believe in something.

It was late summer, too, when my own mother once again became unwell. I remember sitting in my car in the hospital car park, too weary to turn on the engine. I was thinking about her words in the ward. We had had a strange, disturbing conversation, during which she had been oddly jolly, too oddly jolly for a woman who had quite suddenly abandoned reality and insisted she was there to be euthanised.

I took a week off after that, went on a holiday. I remember standing in a beautiful graveyard in Sollér, on Majorca, watching a herd of goats flitter about in a dark-green copse and wondering why I didn’t feel like going to the beach. I remember seeing a lightning storm out of the hotel window. I remember returning home three days before my mother’s death, and realising that she no longer knew me.

I remember my friend, the flautist Ellen Cranitch, playing at the packed funeral. At the end, she performed the Beatles song She’s Leaving Home. I remember the clarity of the notes and the stillness that settled over the congregation. I remember following the coffin out into the sunshine and feeling that death had been a decorous caller, arriving just early enough not to leave my mother waiting too long in darkness and confusion.

The shoe trends to step into this spring
3

Bulling for a bargain at Spanish wine sale
6

Sealing the deal: how to buy a house at the right price
9