A dynamic businessman with a vision for Dublin’s transport system

Obituary: Conor McCarthy had a major impact on the Irish tourism industry 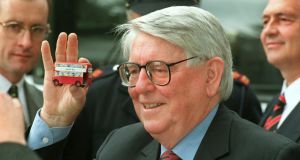 Conor McCarthy had a quick mind and a lively sense of humour. Photograph: Matt Kavanagh

A former CEO and chairman of the Ryan Hotels group, which included the Gresham, Blooms and the Dun Laoghaire Royal Marine Hotel, as well as a string of hotels in Brussels, Amsterdam and Hamburg, he made a huge contribution to the tourism industry. His old school friend, Dermot Ryan, had anticipated in the 1980s the need for budget hotels with large car parks.

Ryan hotels were built in Killarney , Limerick, Galway and Rosses Point in Sligo. After Ryan left the company in 1976, he was succeeded as chairman by McCarthy.

Born in Dublin, where his father was a civil servant, McCarthy went to school at St Mary’s, Rathmines, and started work with Dunlop, the tyre manufacturer in the early 1950s, after which he moved to Murray’s, the car hire business, before joining Ryan’s rival Swan fleet, and, at the age of 28 became its managing director.

Having left the Swan, he founded Pembroke Investments which acquired Barrow Milling Company and had diverse business interests up to his retirement in 1997.

On rejoining the Ryan group in the mid-1970s, he was involved in the purchase of the Gresham Hotel for IR£1.6 million, 60 per cent more than the vendors owners had paid for it two years earlier.

With a quick mind and a lively sense of humour, he was relaxed in the company of journalists and politicians. When he was president of the Irish Hotels Federation (1976-77) it produced a plan to double Irish tourism in five years, adding IR£208 million to the GNP and generating 40,000 jobs.

Charles Haughey, then in election mode, read it and liked what he saw. The main points were duly incorporated in the Fianna Fáil election manifesto, and the tourism industry, which now had a voice at the Cabinet table, duly delivered.

He subsequently played a key role in convincing Haughey to set up the Department of Tourism .

Adding to the long litany of companies and boards that he chaired, he was a former chairman of Córas Tráchtála, the Irish export board, and also chaired Irish Life when it was floated on the stock exchange.

It was as as chairman of the Dublin Transportation Office that he began to put flesh on his philosophy that Dublin should have a modern, efficient, public transport system for the 21st century.This included the Dart and the now extended Luaas, both terms now in the lexicon of Hiberno-English speech.

In an interview in this newspaper in 1999, he described it as “a tremendous challenge. I find it fascinating. I readily admit that we [THE DTO]are strategic and therefore a lot of the things we do means that maybe people in 20 years’ time will say we did the right thing.”

His idea was “to give the car its rightful place in the transport system but not allow it to dominate”. Taking a philosophical approach to being stuck in traffic, he added: “What people have to recognise is if they do that, they are the problem.” Always a realist, he added: “I do not believe we will ever get to the stage where we do not have congestion”.

He is survived by his wife, Carol, their children Conor, John, David, Patrick, Claire, Des, Brendan, Maitiú and Liza, his brother, Paddy, and sister Grace.