‘Newly arrived in Ireland, I learned a new skill – when to shut my mouth’ 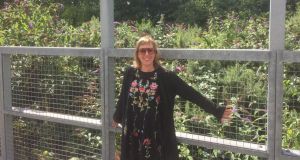 Gemma Tipton: ‘At school in England we hadn’t studied history as a separate subject, but we had grown up surrounded by the idea that Britain was great, and that everyone was really pleased when we came along to colonise them’

My memories of England in 1977 are of Queen Elizabeth’s silver jubilee and a lot of red, white and blue, in the form of cheerily fluttering flags and bunting.

There were street parties and celebrations, and being British felt comforting and normal. It was something to be proud of, like the National Health.

My family moved to Ireland in 1977: midway between the burning of the British embassy and the hunger strikes, it was a troubled time.

I was nine, and I hadn’t thought about life outside my own experience.

There are those things you learn as a kid, such as smiling works, and politeness is helpful.

Most of the other kids were bored with standing up for comhrá, but it was all new to me

As an English child, newly arrived in Ireland, I learned a new skill – when to shut my mouth. I hadn’t really experienced dislike before. Some of my classmates might not have been mad about me, that’s inevitable, but I had never before had people disliking the idea of me.

“Urgh, you’re a Brit,” the other kids pronounced whenever I said anything. Of course I was, but I wasn’t sure what was wrong with that, yet.

At school in England we hadn’t studied history as a separate subject, but we had grown up surrounded by the idea that Britain was great, and that everyone was really pleased when we came along to colonise them.

They got royal visits, the English language, the right sort of people in charge, colonial architecture and civilisation.

In my Irish history book, handed down from previous students, there were underlined passages to learn by heart: how the English kept the Irish “poor, ignorant and obedient to their Protestant masters”.

Keen to please, I learned these phrases off, but I was uncomfortable. Was I really personally responsible for all these terrible things? It felt that way.

The unrelenting awfulness of what my people had done, as told through the history book, was leavened slightly by a previous student having taken his or her felt tip pens to a sketch of Daniel O’Connell.

Since then, I have never been able to think of The Liberator without his lipstick, beads and feather boa, as Danny La Rue.

Learning Irish was a surprise.

Most of the other kids were bored with standing up for comhrá, but it was all new to me.

Stories of Oisín and Niamh, and Finn McCool, complete with revenge and magnificent feats of amazingness were brilliant, and the Irish language was the way to discover them. Apparently I spoke Irish “like the queen”, which wasn’t necessarily a compliment.

It would be at least three decades before Elizabeth came here and wooed the nation with her cúpla focail.

The only words I had in a truly Irish accent were the ones I learned here in Ireland, words that I would never have used with such abandon back in England. They mainly had four letters, and could be liberally peppered mid-sentence, even mid-word.

I talked things over with my brother.

Two years older, he didn’t seem so afflicted by the people disliking his part in the whole 800 years of oppression thing. We also wondered about all the guilt and shame, which seemed to go hand in hand with the land of saints and scholars.

While I was coming quickly to realise that imperialism and colonialism weren’t shiny things of joy, never forgetting seemed to cause serious harm too, for all sides.

“You know what, Gem, maybe we need to make up our own minds” my brother suggested, and so we tried. Still do.

Ireland in 1977 didn’t have the UK high street stores, so people seemed to make things up for themselves, which turned out to be much more fun. I did miss dark chocolate digestive biscuits and plain crisps.

I might have been born in England, but everything that mattered happened to me in Ireland

The money was gorgeous. Not being stuck with the queen, Irish pound notes were practically poetic.

Charles Haughey became minister for health and we all got green toothbrushes. These were really badly made and the bristles fell out.

We went to the spring show at the RDS and marvelled at the horses and farm machinery, so close to the city centre. Time went on, things changed.

I made friends, who had by then stopped calling me a Brit, and started calling me Gemma. I discovered that giving out meant telling off, that never saying a definite no or yes gave huge space for improvisation.

Tricolours hung proudly from windows everywhere during Italia 90, the first time I thought of them flying as an expression of joy, rather than defiance and anger over “the northern situation”.

At home but not

I couldn’t live in the UK any more, quite apart from being horrified by Brexit.

It’s tough to see neighbours tearing themselves apart. Did Thatcher change England, or did Ireland change me?

It had taken a little while, but Ireland crept up on me and settled in to my soul. I love the omnipresence of poetry and song as part of a way of life. I love the stories, the landscape, the way of thinking that sometimes comes at you sideways, surprising with new ideas.

I love the maverick way with words, over and above the practice of punctuating everything with expletives. I love the realisation that there are always more than two sides to everything, and that national culture is itself a knotty, sometimes treacherous concept, in all its guises.

These thoughts came together as I was writing a piece for a Sunday Miscellany series, to celebrate the RTÉ programme’s 50th birthday. I had been anxious: learning when to keep your mouth shut as a Brit in Ireland goes pretty deep.

The programme will be broadcast later in the year, but after the recording at the Project Arts Centre, people wanted to talk.

Other foreigners who had felt that need to stay quiet at certain moments too; and Irish people curious to hear what an outsider found so special about their country.

I might have been born in England, but everything that mattered happened to me in Ireland so, even after all these years, I find myself in the odd position of being at home, and yet often being told I’m not.

Whether it’s people like me, or the Irish diaspora elsewhere, giving everyone’s voices a chance to be heard, is what really makes a country home.