Lucian Freud portrait of Guinness heir as a boy sells for €6.7m

‘Jewel of a painting’ dates from 1956, when Freud was a guest at Luggala, Co Wicklow 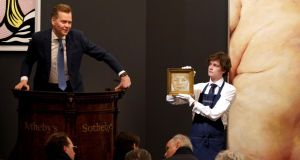 Head of a Boy: Lucian Freud’s portrait under the hammer at Sotheby’s. Photograph: Michael Bowles/Getty

A Lucian Freud portrait of the late Guinness heir Garech Browne as a boy has been sold in London for €6.7 million. Head of a Boy was painted in 1956, when Freud was a guest at Luggala, the Guinness family retreat in Co Wicklow that remained Browne’s home until his death, last year. The price includes the buyers’s premium.

The portrait is said to have hung in the sittingroom at Luggala for more than 50 years, although Browne would tell visitors that it was a copy and the original was stashed in a bank for safekeeping.

Browne, who founded Claddagh Records and was a lifelong patron of the Irish arts, was 16 when he sat for the 34-year-old Freud. The story goes that their first sitting was interrupted when the house went on fire; the portrait was eventually completed after a second sitting was arranged.

The result was “a jewel of a painting”, according to Tom Eddison of Sotheby’s.“It is so precise and so beautifully executed. It is a really extraordinary painting, a very tender and beautiful portrait.” Sotheby’s had expected the painting to fetch more than €7 million, although its eventual sale price still equated to an impressive €137,000 per square inch, according to the auction house.

Freud first visited Luggala with his then wife, Kitty Garman, in the 1940s; the artist later married into the family, eloping to Paris with Browne’s cousin Lady Caroline Blackwood in 1953.

Browne’s mother, Oonagh Guinness, established Luggala as a society playground, with artists and aristocrats partying alongside politicians, models and anyone who appreciated a stiff cocktail at the end of a 1.5km driveway that wound through a forest. When Browne inherited the house and 5,000ac estate, in 1970, he carried on the tradition, inviting poets, writers and rock stars to the turreted house, where champagne flowed and guests would stay for days on end. It’s claimed The Beatles once took acid there; Brendan Behan was a guest; and Marianne Faithfull reportedly called it the most beautiful place in the world.

In later years Browne had filled the house with portraits of Irish artists he had commissioned from the painter Anthony Palliser, but it’s his own portrait as a boy that is likely to be the most valuable item to come from Luggala.

This was the first public sale of art from Luggala, which also houses a library of rare Irish books. However, much of the houses’s most valuable contents had been sold at a grand auction in 2006, when Browne declared that he needed to declutter. The clear-out raised close to €3 million.

Browne finally put Luggala on the market in 2017, for €28 million. He hoped to find a buyer who would allow him to stay on in the house, but he died within a year of putting it up for sale, while travelling to Ireland from Singapore.

Luggala is still on the market, and the asking price remains €28 million, according to selling agent Nick Crawford.