VW Touareg: can the luxury SUV stop its tribe from shrinking?

Like its nomadic namesakes, the Touareg may struggle to stay relevant in a changing world 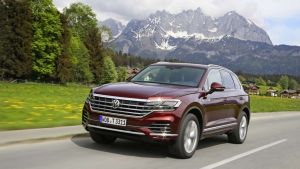 Pity the Tuaregs. Struggling to defend their nomadic lifestyle, these North African people saw in the Arab Spring of early 2010s the opportunity to strike for some independence in a region of northern Mali.

No sooner had the rebellion begun in 2012 than they found themselves with some unsavoury bedfellows in the form of Ansar Dine, an off-shoot of Al-Qaeda, and a sprinkling of members from Nigeria’s jihadi group Boko Haram. By the end of the year the Tuaregs were doing deals with the Mali government and French peacekeeping troops to help them fend off their former rebel colleagues. The Tuaregs are struggling to survive in a world of technology, jihadi militants and post-colonial state border controls.

It’s sadly coincidental that the ill-fated people – whose name is an Arabic term meaning abandoned by God – should have inspired Volkswagen’s first real foray into the SUV ranks. Christened in honour of these roaming north Africans, the Touareg has had a rocky history in terms of sales.

Whatever about the Tuaregs being abandoned by God, the Touareg seems to have been hobbled by VW.

While the Celtic Tiger years were good for the model, when the recession bit, it bit hard.

The one saving grace was a commercial variant that proved remarkably popular amongst Irish buyers, many of whom discovered their entrepreneurial spirit and sole trader status just at the time they went shopping for a new car. As a commercial, it benefitted from significant tax savings, both in terms of the initial price and the annual motor tax.

Take 2016, for instance: 495 Touareg Commercials were registered in the Republic, compared to just five passenger variants. Of the commercials, 218 were registered in Dublin, where a large four-wheel-drive off-roader is a must for the city’s farming community. The trend continued last year, where 413 commercials were registered against just three passenger versions. Whatever the format, the sales were no doubt welcomed at Volkswagen Ireland’s head office. Sadly for the firm, however, changes in the tax policy on commercials means the new Touareg will not qualify for commercial status – and the tax benefits – so the smart-looking SUV is confined to the passenger market.

As if to further nobble its chances, VW has decided the car will only feature five seats, thereby deleting it from the shopping list of a great swathe of well-heeled family buyers. It’s a crying shame, for the car itself is a luxury liner, punching far above its weight in terms of refinement and comfort, the epitome of why Volkswagen is generally regarded as a quasi-premium brand. This is more than just a facelift. The new VW is longer and wider than the last generation, and while it carries the same overall profile, there are several telltale signs that this is the latest and greatest Touareg on the road – most notably the long, dominant chrome grille.

Under the metal, the engineers have delivered some impressive weight savings, dropping on average 106kg from the Touareg.

Needless to say, this is a proper SUV, with permanent four-wheel drive and the firm’s impressive eight-speed dual-clutch DSG transmission. Perhaps as evidence of the fact that this car does off-roading duties, VW did not send us driving across muddy fields during the iniital press drive, a feature of many launches by car firms eager to claims their new crossovers are more than just little hatchbacks on stilts (despite that being exactly what they are).

In terms of mechanics, the obvious option for Irish buyers will be the 3-litre V6 diesel, putting out 286bhp, although a V8 diesel is in the German car firm’s product plan. However, with emissions of 182g/km for the V6 – and an annual tax bill of €750 – few will find the need or justification to opt for the bigger diesel.

Over several hundred kilometres – both here and at the original launch – we’ve established that the Touareg is nice to drive. Perhaps 300bhp isn’t enough to turn this into a sprinter, but it’s incredibly refined and smooth nonetheless. There’s a degree of bodyroll, but nothing you wouldn’t expect from a car of this size, and it hunkers down nicely in the corners.

Compared to the likes of the Volvo XC90, the steering is much more engaging, while it also feels more premium and polished than the Land Rover. Simply put, it’s a better car to drive.

This is the sort of SUV that suits a cream leather trim rather than hard-wearing plastics. The new Touareg is also a bit of a mobile techfest. As with the recently launched Arteon flagship saloon, you could effectively control the Touareg on most trips with only your left thumb. Engage the active cruise with traffic jam assist and you merely have to point the car in the right direction – though that is helped with lane-keeping assist system – and accelerate or slow down using the toggle switch on the steering wheel.

On a trip west we did encounter one foible with the system, however. Given the length of time we spent on the M4 and M6, it thought I was either asleep or busy playing Fortnite on my phone. Initial warnings to “put your hands on the wheel” were ignored but then after a few warning beeps the system applied a little snap of the brakes, jerking the car and its occupants supposedly from our slumber. Basically it meant that every now and then the warning came up on the dash, forcing me to wiggle the steering wheel to prove to the car that I was still compos mentis and paying attention. It’s easy to see how this could quickly start to irritate an owner.

The big talking point, however, for everyone who sat into the test car was the enormous touchscreen displays. Similar to what Mercedes has done with its luxury cars, VW has combined two large screens to give a real panoramic sense to the centre console. It’s also very intuitive for anyone with even a passing knowledge of tablet computers. Simply swipe, scroll and pinch the various elements on the screen and you can control everything from the infotainment system to the heated seats.

There is an ongoing debate about the distraction factor of these touchscreen controls for drivers, but in reality VW has got the mix right in terms of switch controls and touchscreen elements here, and most of the important features can be operated via switches on the steering wheel.

There’s still a lot of digibabble at play in car interiors and apps, so it’s likely to be a while before it actually settles down to a selection of features that are actually useful to motorists, rather than mere window dressing.

The Touareg is regarded as VW’s flagship. Yet without a third row of seats, it’s flying at half mast. Being only a five-seater is going to cripple its sales potential, up against seven-seater rivals like the XC90, Discovery or even its close cousin the Audi Q7.

Yet all is not lost for VW. They have an alternative in its US market line-up that could surely solve its seven-seat situation here: the VW Atlas. This is a replica of the Touareg in everything but size. It’s positively enormous and all seven seats offer adult-sized comfort and legroom, albeit with limited luggage if all are in use. Unfortunately it’s only sold in petrol for now.

A recent trip to the US gave me the chance to try out the Atlas and it’s an impressive beast. It’s relatively easy to handle, and the cabin is like a mobile sittingroom. The ride is not as good as the Touareg, but that could rectified for Europe, as could the engine line-up. Every moment spent with it underpinned two impressions: if they can get the price right, then the Atlas would surely find a ready audience amongst well-heeled Irish families.

For now the Touareg delivers on refinement, comfort and, frankly, it’s also less brash than rivals, which is good for those who seek a little subtlety in their SUVs.

I fear, however, that with a relatively high tax band, and running counter to the wider industry trends, it will suffer a similar fate to the Tuaregs, struggling to make themselves relevant in a quickly changing world.

Verdict: Refined, comfortable SUV crippled by a lack of a family-friendly third row of seats