The new generation 208 is another advance for Peugeot, but it lacks that performance punch that many electric cars can deliver 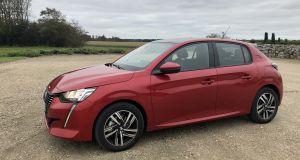 The 208 comes in 4cm longer and 30kg lighter than the one it replaces, and in the metal it does look like a proper sporty little hatchback

Peugeot may have made its name in Ireland with the 504 family saloon, but the model that made Peugeot desirable and cool was undoubtedly the 205. This 1980s supermini makes the cut every time. The problem for Peugeot has been that its follow-ups in the supermini class were all either too limp or lumpy to warrant the same respect, epitomised in the flaccid 207.

The latest iteration of the 208, launched 2012, aimed to rectify this, and has delivered to a large degree. Now it’s time for a mid-life revamp and a little electric surge. That’s the big news: the Peugeot supermini is going electric.

Developed on a new platform it shares with the Citroen DS3 Crossback and the Opel Corsa, the revamped 208 promises an official range of up to 340km on a single full charge, courtesy of its 50kWh battery stored squarely between the four wheels and under the cabin. That’s a decent range for a supermini, which in fairness is always aimed to be a suburban runaround rather than a continental touring car.

Electric aficionados will double take on that last figure, and rightly so. Given that the beauty of electric cars is the almost immediate delivery of power, most electric models boast acceleration times that challenge Porsches and Ferraris. A time of 8.1 seconds is positively sloth-like in the electric era.

When we quizzed a Peugeot engineering spokesman about this, he said the overriding goal at the car brand was to create a car that differed little from the regular models, making the transition easier for newcomers to electric.

I can see some sense in this, and also the fact that if you limit the acceleration that in turn reduces the energy expended from the battery and so increases the ultimate range per charge. However, it drains away a lot of the fun from driving an electric car.

You do get the benefit of the lower centre of gravity due to the heavy battery sitting so low to the ground, and this will dramatically improve cornering and poise on the road. Yet it’s a missed opportunity by Peugeot. Hopefully it will come out with a performance version later that takes full benefit from the acceleration power of electric cars.

Of course electric isn’t the only story to be told on the new 208. This is a mid-life revamp so there have been a few styling changes as well, with the car coming in 4cm longer and 30kg lighter than the one it replaces. And in the metal it does look like a proper sporty little hatchback.

Available as a five-door only, we got to put both the 1.2-litre petrol 100bhp and 1.5-litre 100bhp diesel through their paces. Oddly, the three-cylinder petrol can be quite gruff and noisy, while it’s the diesel which is the more sedate and refined of the two engines we tested.

On the inside the 208 gets an update of Peugeot’s still-controversial i-Cockpit and the now Peugeot trademark small steering wheel.

The small steering wheel remains divisive. Amongst colleagues it’s motoring Marmite: drivers love it or loathe it. Peugeot engineers say they have extensive market research to show enough motorists fall into the former camp to warrant its retention.

The main gripe is that for some it means the top of the wheel doesn’t sit below the line of sight of the instrument cluster, but directly in front of it. This continues to be the case depending on your seating position.

And that instrument cluster is the big difference in this new generation of the 208. It’s the latest generation of the company’s so-called i-Cockpit infotainment system, which basically means a snazzy digital screen and an impressively responsive central touchscreen. It has also been a controversial feature, but it works very well on the rest of the range. Now with the 208 they’ve added another feature: a three-dimensional element to the display.

Basically the information – rev counter, speed, Sat-Nav instructions – seems to float in front of the screen rather than on it. Frankly, no one on the test could really see the point of this, other than to pretend the car is more high-tech than it really is – it’s tech window-dressing that serves little functional merit. Overall, though, the interior of the new 208 is amongst the best in this class.

The petrol and diesel versions, which also include a 75bhp 1.2-litre petrol, arrive in Irish showrooms before the end of the year, as will the electric 208, in time for 2020 registrations. Prices will be announced later this month.

Peugeot has found its mojo with a great looking range of crossovers, topped off with an impressively sporty and muscular 508 saloon. This new 208 should deliver another successful chapter for the brand, particularly with the addition of an electric version to the range. It’s just a pity they’ve decided to forgo some of the performance punch that electric cars can deliver.

Cool urban styling at this smart seaside terrace for €750k
7