For family motoring at a reasonable price, the new Combi Style model ticks most boxes 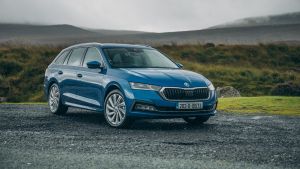 Skoda Octavia Combi Style 2.0: What you get from Skoda is a spacious car at a good value price compared to equivalently roomy rivals.

Ireland’s adopted car brand, Skoda, has pulled off a marketing masterstroke. By some slick marketing direct to Irish buyers – following the Toyota playbook from the 1980s – the Czech car brand is now as Irish as the post-pub spice bag, the trek to the ploughing championship and Tayto crisps.

Every age has its motoring cliché. Off the top of your head, you can probably define your childhood based on the popular cars of the time. Ford Cortina, Toyota Carina, Nissan Bluebird, Ford Mondeo. Added to that pantheon of Irish motoring wallpaper is the Skoda Octavia post-1996.

The most surprising fact of Skoda’s Irish life is that it’s only now becoming a fixture in the top five best-selling car brands. It entered the top five rankings last year, but perhaps the biggest landmark is that so far this year, it has outsold Ford to take fourth spot. For anyone 40 years of age or older, that’s a pretty significant motoring event.

Recent sales growth can be attributed to the addition of a range of impressive crossovers to the fleet, but still the best-seller for the brand remains the Octavia, contributing 27 per cent of new registrations this year, and 35 per cent last year as the third-generation came to the end of the road.

Irish buyers value the Octavia’s proposition of family functionality and VW engineering at a more affordable price. That latter point is worth noting; it’s not part of Skoda’s official shtick, but the message is well disseminated; this is a Volkswagen but without the premium you pay for that badge.

Here again, the Octavia is built on the same updated underpinnings as the latest Golf, the VW Group’s award-winning MQB platform. It’s also powered by the group’s range of engines, comprising a 1-litre and 1.5-litre petrol and two iterations of 2-litre diesel (115bhp or 150bhp). A 1.4-litre petrol plug-in hybrid is on the way.

Can this fourth-generation remain Skoda’s symbol of sales success? Probably not, in the face of the crossover craze. The Skoda Kodiaq is probably going to overtake it. Yet, in its latest guise, the Octavia is hoping to fight off the crossovers by offering a logical alternative to the supposedly big-boots mock-SUVs – an estate.

Space has always been Skoda’s biggest trick. It’s how the brand lured buyers of family saloons into what are, on paper at least, booted hatchbacks. Frequently Irish car buyers regarded the Octavia as a rival to the likes of the Toyota Avensis or even the VW Passat, when, it’s officially a competitor for the Corolla and Golf.

Buyers don’t care how you classify it. What you get from Skoda is a spacious car at a good value price compared to equivalently roomy rivals. For example, the rear-seat legroom in the Superb would challenge any €100,000-plus limo, while the estate version of that car could double as a hearse.

So big boots are part of Skoda’s DNA and the new Octavia sticks to that approach. Known in Skoda lingo as the Combi, this estate variant offers 640 litres in the rear, an increase of 30 litres on the previous version, while if you flip down the rear seats you get 1,700 litres. That’s up there with the best in class.

However, given that Skoda buyers know a thing or two about value for money, it’s worth noting that the estate costs €1,500 more than the new saloon, so you’d want to be sure you really need that extra space. After all, the saloon’s boot offers 600 litres, more than enough for any average family’s needs.

But then logic doesn’t seem to apply to the purchase of crossovers these days, so why apply it to the Octavia?

In the rear seat, space continues to be a selling point, with plenty of headroom and legroom, while up front there’s proper saloon space, with ample adjustments of seat and steering column to suit most drivers.

The interior design has had a digital overhaul, in keeping with the rest of the VW Group’s mid-sized family cars. Our test car was the range-topping Style version, so that meant it came with plenty of soft-touch plastics and loads of digital gadgetry. It all adds to the sense that this Skoda has made a major move upmarket. No longer is it simply a sturdy, value proposition. There’s a real move towards comfort and refinement here that will really surprise anyone coming out of a 2012 Octavia, for example.

Still the digital interface could be better. Like the Golf and Audi’s A3, while the system is relatively intuitive, navigating the menus can be annoying and are not as simple as some rivals. When on the move, working your way through the menus can be annoying and adding the air-con controls into the digital display is a backward step for a brand that prides itself on functionality and utility.

The current range-topping 2-litre 150bhp diesel is pacy enough, and sips fuel at 4.7l/100km (60mpg), which is very impressive for a car of this size. We had the car laden like a skip with old furniture at one stage and it barely changed the fuel economy figure.

Skoda has also done a great job of quietening the usual diesel rumble, and if there’s one noticeable improvement in the new Octavia it’s the reduction in engine noise – and also wind noise – in the cabin. It’s proper premium in this regard. That’s largely down to the fact it makes quick work of moving up through the gears.

With 150bhp on tap, it’s not a slouch with plenty of torque over 1,500rpm, but it’s no racer either. While this is likely to be one of the most popular engine options for Irish buyers – diesel is still the favourite choice at Skoda showrooms – it perhaps doesn’t get the most from the chassis.

Mated to the VW Group’s dual-clutch automatic transmission, we expected it to be more responsive, particularly under acceleration. It’s very smooth, but the focus on fuel saving borders on a fixation and, ultimately, comes at the cost of throttle response.

Given its Golf underpinnings, we also expected the Octavia’s handling to be adept. It’s comfortable, but never quite as engaging as we had expected. With a fleet of pedigree vRS performance models, clearly Skoda engineers can build exciting cars, but this one is tuned for comfort rather than driving entertainment.

Having recently driven four iterations of this newly updated MQB platform – in the form of the new Golf, Seat Leon, Audi A3 and this Octavia – it’s fair to say you get what you pay for and the Audi is by far the clear-cut winner in terms of ride and handling, while the Skoda takes fourth spot.

Overall, though, Skoda has brought enough digital whizz-bang and premium touches to the latest car to keep it true to its proposition of comfort and functionality. The big question then is how is stacks up in terms of value.

The new Octavia starts at €23,950 for the 1-litre Active saloon. For that you get a standard kit that includes an eight-inch touchscreen, LED lights, 16-inch alloy wheels, air conditioning, keyless entry, and lane-keeping assist.

The new Octavia can also be had with all manner of high-end options including a full digital instrument panel, a heads-up display, a built-in digital voice assistant (called Laura), birds-eye view parking assistance, pre-crash detection system, emergency braking with pedestrian and cyclist detection, and active cruise control. Our test car featured the 10-inch touchscreen and sat on 18-inch alloys.

When it is all added up, the Style version we tested starts at €36,750, but with added optional extras hit an eye-watering €43,198. That’s far from the value proposition that Skoda seemingly espouses. In fairness, these extras included the likes of Matrix LED headlights – a wonderful feature but one that will set you back €1,341. That’s not the sort of purchase that defines the average Octavia owner.

Frankly, even though it makes sense to consider this combi estate as an alternative to the crossovers, for most buyers the fastback saloon makes the most sense. Save the €1,500 outlay on the estate and spend it on opting for better spec. For Ireland, the big seller is reckoned to be the Ambition versions of the saloon, priced between €27,250 and €34,650 depending on engine.

Weighed up against rivals, there are better cars to drive for this price, but there is little on offer that matches the blend of family practicality and smart features, not to mention the well-held reputation that the Octavia has established in Irish eyes. And that will stand to the car when it comes time to sell.

The growing fleet of crossovers, of course, will lure many buyers away from this Irish staple, but the latest Octavia is hard to argue against when it comes to laying out your hard-earned cash for a new car.