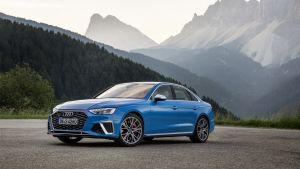 You get the feeling that Audi, in doubling down on diesel power by introducing a new V6 TDI sporting S4 model as part of the updated A4 range, is also covering its behind with a touch of greenwash. You see, while this muscular, athletic new S4 is definitely diesel-powered it’s also packing a pair of electric assistance systems.

The first of these is a 48-volt mild hybrid that comes with the increasingly familiar belt-driven starter/generator motor. While not a full Toyota-esque hybrid setup it does mean that the mild hybrid system can take care of more of the car’s electrical demand, removing strain from the engine. It can also trigger the stop-start system earlier and keep the engine powered down for longer when waiting in traffic. Audi reckons that it contributes a 0.4-litres per 100km fuel saving overall.

The other electrical assistant is all about grunt – the S4’s 3.0-litre V6 diesel engine gains an electrically-driven turbocharger which spins up to speed all but instantly, delivering more power at lower RPM and, as Audi claims at any rate, eliminating the waiting period of turbo lag.

So, a ferocious level of high technology and, in the shape of a partial hybrid system, a touch of environmental caring and sharing. All good then? Well, yes, but still – diesel? Does launching a new diesel model, especially a high performance one, leave Audi looking slightly out of touch with the world?

That question will be answered as soon as the sole of your foot makes contact with the carpet under the throttle pedal. The electric turbo doesn’t quite meet the maker’s claim – turbo lag is still there, it’s just that there’s much, much less of it than there used to be – but even so 700Nm of torque in a medium-sized saloon car makes for some serious thrust.

In fact that torque figure means that this diesel S4 actually has more low-down thump than the more highly-strung, petrol turbo RS4. Performance is duly dramatic – 0-100km/h comes up in just 4.8secs thanks to the standard-fit quattro four-wheel drive which effortlessly peels that power down to the tarmac.

The initial rush is impressive enough, but this engine’s big party trick is to sustain it to a higher level than you would expect from an oil-burning engine. Keep your foot down and the S4 feels as if it’s being relentlessly sucked towards the horizon by some monstrous vacuum cleaner. In fact with that instant torque and effortless seamless power it actually feels a little like an electric car. Someone get Alanis Morissette on the phone.

The S4 is a touch dominated by its engine, which is perhaps unsurprising, but there are other strengths at play here. Audi has restyled both the exterior and the interior – as it has done for the entire A4 range – and the results are mildly mixed.

The S4 looks better than the regular models by dint of being bulkier of line and more muscular of build. The front end of the car is more or less all new, across the range, with a wider, flatter grille and new headlights. The effect on the S4 is fine – helped by those puffed up wheelarches, but on more standard models there’s an unavoidable comparison to the Hyundai i40.

Inside the changes are almost all centred around the centre – there’s a new 10-inch touchscreen running the latest “tile” version of Audi’s MMI infotainment system, which includes such niceties as a live traffic Google Maps sat-nav, and Audi’s own system which tells you what’s the best speed to drive at to pick up the next green light (well, in cities where the traffic lights can communicate with passing cars anyway). It’s a slick system but we do miss the old twist-and-click control wheel on the centre console which always feels like less of a distraction than jabbing digits at a screen.

No complaints about the rest of the interior, though. It’s looking a fraction old-fashioned compared to some newer rivals, but quality levels are excellent, and the S gets lashings of shiny carbon-fibre trim, and the gorgeous high-back bucket seats from the more expensive RS4. Space is fine, if nothing exceptional.

The handling and road holding, though? Oh, that’s pretty well exceptional. Fast Audis have historically suffered in comparison to more fleet-of-foot rivals, but while the S4 still has the four-wheeled sledgehammer effect of its forebears, there’s a touch more delicacy here. The steering in particular must come in for praise as it is deftly weighted and has very good feedback. As good as a new BMW 3 Series? Not quite, but not perhaps a million miles away.

The S4 also has slightly less aggressive chassis settings than the RS4. That means you must endure a little more roll in corners, and a sense of nose-heaviness when turning into corners (oh, the agony!). Yet the trade-off is a well-damped, comfortable ride quality, and a sense of long-haul refinement that could make this hot diesel Audi the perfect car for continent-crushing long-haul trips, assuming anyone ever makes those anymore.

Rolling refinement is excellent, but occasionally you’ll catch the augmented engine sound software missing a beat, and allowing you to hear the old-school diesel gurgle beneath.

Speaking of diesel, and being a touch more realistic, if you fancy a slightly more sensible A4 there’s a 163hp 2.0-litre TDI (badged as a ‘35 TDI’ in Audi’s confusing new badge system) which is a new (or at least thoroughly re-engineered) engine designed around the latest emissions regulations. Given Audi’s past (even recent past) in that arena, you can take that as lightly or as seriously as you like, but it’s an impressive engine – smooth and quiet, with decent power and 380Nm of torque.

Audi hasn’t given us claimed emissions nor fuel economy yet, but it does seem to sidestep the low-rev lethargy that has recently blighted VW Group diesel engines when combined with the seven-speed dual-clutch automatic gearbox. It’s not as fun to drive as an equivalent BMW 3 Series, but it rides much more gently, and refinement is utterly top drawer.

It’s the powerhouse A4 that lingers rather longer in the memory, though. Resplendent in its “turbo blue” paint work, and with that addictive torque hit to enjoy, it’s a little hard not to fall in love with the new S4. You will likely be constantly nibbled at by both your conscience and the zeitgeist, but once that electric turbo starts huffing, it’s hard to hear the complaints.

Verdict: Diesel power might make you cringe, but this is an accomplished sporting saloon.

How to make Ireland’s best cheeseburger at home
4