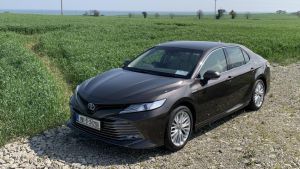 Think of it as Seiko watch syndrome. Seiko watches generally occupy a relatively humble place in a humble jewellers. It’s true, you can get models that are eye-wateringly expensive, but most of the Japanese manufacturer’s output is little more pricey than the cost of a good meal out.

The thing is, though, that the internals of a Seiko – the movement, the bit that actually spins the hands – is always at least as good as, and often actually superior to, the movements of the expensive, bling-heavy Swiss watch brigade.

Seikos are incredibly reliable, precise, beautifully made and no, they haven’t paid me nor given me a free watch to say any of this. I happen to know one horological collector, who has drawers full of Rolexes, Omegas, and Breitlings yet who still reckons his favourite wrist-wear is a Seiko.

For Seiko, read Camry. Oh sure, there are more glamorous cars around. Certainly there are more expensive. Definitely there are big, hulking, pricey SUVs that are the motorised equivalent of a gold-and-platinum Audemars Piguet. But are they actually, really, fundamentally better than a Camry? Doubtful . . .

The new Camry returns to Irish shores for the first time in 15 years, and back in 2004 when the last one departed, the motoring landscape was very, very different. Since then we’ve seen the rise and fall of diesel, swingeing fuel price rises, the first stirrings of the electric car revolution, and the seemingly unstoppable climb of the SUV.

Into that motorised maelstrom rides the new Camry, and it’s still a (relatively) humble, straightforward, four-door saloon. Where once that would have seemed dull and predictable, today it feels like a breath of fresh air to sit in a new model that doesn’t perch your bum three feet in the air.

Underneath, the Camry owes much to the new Corolla and the RAV4, being as it’s based on the same Toyota New Generation Architecture (TNGA) chassis as those cars. There’s also, unsurprisingly, a lot of Lexus ES300h in here – the two cars are similarly sized overall, and share a hybrid powertrain.

Of course, it’s not that simple – there’s hybrid electric assistance and the engine runs on the fuel-saving Atkinson combustion cycle, so you won’t be visiting fuel stations as much as you used to in the old one.

In fact, the new Camry is pretty darned frugal. According to Toyota, the Camry will record average fuel economy of 5.3-litres per 100km, and that’s on the tougher, new, WLTP economy and emissions test. Co2 emissions duck as low as 98g/km (up to 126g/km if you’re looking at the WLTP figures) and I’m pleased to report that in daily use, you’ll get pretty close to that claimed figure – over more than 1,000km of test mileage (and much of that on motorways, where hybrids traditionally struggle) we scored an average of 6.2-litres per 100km.

Performance is pretty good too. An 8.3 second time for a 0-100km/h run is sufficiently brisk, and while the combination of hybrid and CVT automatic transmission means that the engine does rev long and high when you need full power, it’s far more refined and less annoying that it used to be. In fact, unless you’re giving it maximum socks, and if you’ve got the stereo on, you’ll probably hardly notice it.

From the outside, the Camry is a pretty imposing car. It’s a rangey 4.8-metres long, and from the front it appears to have swallowed some kind of high-tech electric shaver, and left the foils sticking out. It’s not pretty, and its most obvious rival – the Skoda Superb – has styling that’s far cleaner and neater, but it manages to look generally appealing.

It’s better by far on the inside, primarily because there’s so much space. This is one of the few four-door saloon’s that’s a full five-seater, with space in the middle rear seat for actual human beings. A 2.8-metre wheelbase means that there’s legroom for days, and if seat comfort isn’t quite up to the standards of its Lexus cousin, then certainly it’s good enough.

Our Platinum-spec test car (starting from €42,950 – €3,000 above the base price model) came with buttery-soft cream leather upholstery and striking “tiger-eye” wood trim. A touch 1990s, perhaps, but rather nice all the same.

Not so nice is the digital screen that sits between the main analogue instruments (it looks cheap, and has slightly confusing displays) and the small and fiddly infotainment system (you get a mere seven-inch screen, when most rivals offer at least an extra inch, and there’s no Apple CarPlay or Android Auto. Still, never mind the width, feel the quality, eh?

To drive? Don’t go expecting the same dynamic vivacity that the new Corolla displays. The Camry is a big, comfy, cruiser and that is the role in which it excels. Aside from a touch of tyre noise on poor surfaces, the cabin is hushed and refined and long-haul miles roll away with barely any notice taken of them. Point it at some corners, and the Camry lacks for feedback and fun factor, but in fairness to it, it’s no boat – the steering is accurate and nicely weighted, the chassis sure-footed if devoid of sharpness.

A Ford Mondeo hybrid is more fun by far, but lacks the Camry’s generous 524-litre boot space, and its build quality. A Skoda Superb trounces it for boot volume, and arguably style, but can’t be bought yet as a hybrid. A related Lexus ES is more stylish and luxurious, but is it worth the extra €10,000, minimum?

Above all, though, you can just feel the Camry’s rock-like solidity. That sense of unburstable reliability that means it’ll probably still be working perfectly when you’re dropping the grandkids off at university. In a world of over-blown, over-hyped motorised Rolexes, the new Camry is a refreshingly honest, solid, Seiko on wheels.