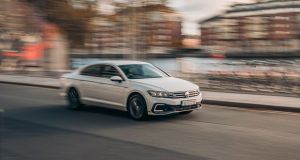 The Passat is a cleaner, greener Volkswagen saloon that’s a great introduction to the new electric age without sacrificing on range or paying an exorbitant price.

For all the political and media spotlight on electric cars, sales figures show the public’s focus is fixed on hybrids, for now at least. Anecdotal stories from the forecourts suggest the vast majority of customers start out looking for electric, but quickly realise the price is too high, or the one they can afford is either too small for their needs or from a brand they don’t like. For others, the battery range just isn’t good enough.

Inevitably they turn to hybrid. Early sales figures for January registrations show that while sales of fully electric cars now account for 2.58 per cent of the overall new car market, petrol-electric hybrids make up 15 per cent, with plug-in hybrids accounting for a further 1.9 per cent. In terms of growth, hybrid sales are up 95 per cent on last year, while sales of fully electric models are relatively static.

With success comes complexity. Hybrids used to come in one flavour; these days there’s at least three.

First there is what’s dubbed “mild hybrid”, a term that generally sends long-time hybrid advocates into apoplexy. What gets their goat is the fact that in reality a “mild hybrid” is little more than a conventional petrol or diesel engine coupled to a low-voltage battery and electric motor used to power features like the stereo system and air conditioning. These systems can’t power the car on its own.

A “regular” hybrid, means the battery and its electric motor can power the car all on its own. Here the battery packs are 600 volts or so and, according to the likes of Toyota, they will the primary power source for 62 per cent of the time during urban driving. That means for urban and suburban drivers who keep their speed down and go easy on the accelerator, you may find yourself driving in electric mode the majority of the time. Happy days.

However, there is another set-up that’s one step closer to full electric and that’s plug-in hybrid. Simply put, this is the same as a “regular” hybrid, but comes with a bigger battery, charged via the mains, that guarantees electric-only driving for an average of 50km. And it stays in electric mode up to speeds of 130km/h or so. Obviously the harder you are on the throttle, the lower the electric range, similar to the way a petrol of diesel car uses more fuel the faster you drive.

And when the big battery’s power is reduced to a certain minimum level, the car reverts to the same format as a regular hybrid, running on electric at low urban speeds but turning to the petrol engine to offer power when acceleration or faster speeds are needed.

There’s a trade-off, of course. The bigger battery means added weight, so when you are running the car as a regular hybrid, you are humping around a big lump of unused battery, often the equivalent weight of an overfed rugby hooker. And the bigger the battery, the bigger the added cost.

That’s why the brightest boffins in the car companies run their algorithms on user data and estimate what’s best mix for their particular customer base. The aim is to get just the right amount of battery to give an electric range buyers will use, while also combining it with an engine that offers decent power to drive the car along smoothly when it needs to complete a long-distance run.

VW engineers entered all the stats and the algorithm spat out the following format for a plug-in Passat: a 1.4-litre petrol engine combined with a 13kWh battery pack powering a 85kW electric motor.

What this format means is a realistic electric-only range of 57km before it returns to regular hybrid mode. As for recharging, the 13kWh battery takes under two hours on the 7kW charger, or more than five hours on a regular plug socket.

One issue with regular hybrids is that, in their focus to deliver decent fuel consumption figures, the trade-off comes in driving pleasure. Often this is down to a transmission set-up that punishes hard acceleration with whining engine revs and relatively slow responses.

Thankfully, over the years this has been addressed in part by manufacturers, and it’s a credit to this Passat GTE that it delivers decent driving dynamics and throttle response.

It’s not without issue, though. Once I used up the electric-only quota and the Passat turned to regular hybrid power, there was a tendency for the engine to rev to 2,000rpm for a while when I started the car initially. Also, the brakes lacked the assertive bite I would have liked, though that may not have been down to anything related to the powertrain set-up.

The Passat offers a choice of driving modes. In GTE mode, it bundles together the power of the battery and the engine to deliver the best mix of torque and acceleration. At the other end of the spectrum is e-mode, delivering electric-only driving, provided there’s enough power left in the battery of course.

In GTE mode, VW says this Passat offers 214hp and torque of 400Nm, delivering a 0-100km/h time of 7.4 seconds. That’s impressive for a car this size and justifies the performance pitch in some of the marketing bumf.

The promised range is about 57km in full electric mode (official figure is 70km).

The extra lure for these plug-in cars is the Sustainable Energy Authority of Ireland (SEAI) grant of €5,000, which combines with a €2,500 VRT rebate to drop the final cost of this car to €42,495.

As for the rest of the package, well it’s a Passat. So that means a spacious family saloon, with a cavernous boot and ample leg room in the back for three adults. And that also seems to be its biggest drawback: it’s a family saloon.

To appreciate just how far this format has fallen out of favour, consider the fact that in 2019, the Passat ranked a lowly 22nd in the sales tables. Toyota has abandoned the Avensis, while the one-time favourite, the Mondeo, is down in 49th place. Only the Octavia is doing well these days, holding fifth spot.

For families, its seems SUVs are the only flavour they like. Which is a real shame, for they are missing out on better driving pleasure and arguably better comfort, all at a better price than you will get any equivalent crossover or SUV.

And the simple truth is that the SUV format adds unnecesary weight, which then reduces the benefits you get from adding a plug-in battery pack. But that’s a sermon for another day. Suffice to say the Passat GTE is an attractive package, arguably the best one to choose if you are in the market for a well-dressed mainstream saloon right now.

As to rivals, well the biggest is probably a redressed version of itself: the Skoda Superb plug-in hybrid, arriving in limited numbers here this year. Taking equipment levels into account the VW could be considered the better dressed of the two for the price.

Then the only outstanding issue is whether you should take the leap for this tech or wait and see if the electric-only battery range gets much better. It’s a judgment call, but I think given the pace of battery development, supply restrictions on electric-only cars due to excessive global demand, and their relatively high prices, plug-in hybrids will remain relevant for several years to come. So the residuals should be strong when it comes time to trade it in.

Ultimately, you get a cleaner, greener Volkswagen saloon that’s a great introduction to the new electric age without sacrificing on range or paying an exorbitant price. All from the company that – thanks to its “dieselgate” emissions cheating scandal – contributed more than anyone to accelerating the change from fossil fuel to electric power. Every noxious cloud has a silver lining.