New supermini takes on the styling of the larger Grandland X 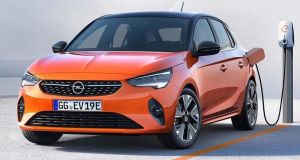 Just days ahead of its official public debut, the first images of the new Opel Corsa have leaked online. This will be a crucial car for Opel, and a critical test of how the brand will develop under the PSA Peugeot-Citroen group.

Once a European best-seller, the outgoing Corsa has fallend down the rankings on most buyers’ shopping lists, not least because of Opel’s decision to reskin and update the 2006 Corsa ‘D’ model - previous owner General Motors was reluctant to spend the cash to create an all-new model for the cut-throat European small car segment, with its wafer-thin profit margins.

Under PSA, this Corsa ‘F’ is all-new, sharing its Common Modular Platform (CMP) with the new Peugeot 208 and the DS 3 Crossback (along with a host of yet-to-be-launched other PSA group models).

Mostly it will be sold with variations of PSA’s 1.2-litre ‘PureTech’ petrol engine, with and without turbochargers, but it will also be Opel’s first all-electric model, sharing a battery and electric motor set-up with Peugeot’s e-208.

The e-208 gets a 50kWh battery powering a 134hp electric motor, so performance for both models should be brisk, at the very least, and Opel is projecting a circa-300km one-charge range for the electric Corsa.

With batteries come weight, though, so Opel’s engineers have worked hard to get the weight out of the new Corsa’s body-in-white, trimming some 40kg overall. They’ve even gone to the lengths of fitting an aluminium bonnet (rare sophistication for a small hatchback) which saves 2.4kg all on its own, while lighter seats contribute another 10kg saving. Overall, the new Corsa will be a whopping 108kg lighter than the outgoing model, with basic version weighing in at just 980kg - exceptionally light, even by small car standards.

An eight-speed automatic gearbox will be available as an option, as will hugely sophisticated ‘IntelliLux’ multi-beam LED headlamps, that basically let you leave your high-beams on all the time, selectively blacking out sections of the light to avoid dazzling others. Heady stuff for a Corsa.

Style-wise, the new Corsa takes clear cues from the Grandland X crossover - just look at the forward-raked C-pillar with the darkened panel above it to give the sensation of a ‘floating’ roof.

According to previous reports, the new Corsa had been almost ready for sign-off by the time PSA bought Opel from General Motors, but PSA chief executive Carlos Tavares ordered a total redesign and re-engineering job - not just because the styling was too conservative, but also because he didn’t want to have to pay a licence fee to GM to use its chassis, around which the car was originally designed.

The new Corsa will continue to be built at Opel’s factory in Zaragosa, in Spain, and will be on sale int he autumn of this year. Prices will likely rise slightly compared to the outgoing model, with the electric version acting as the top-spec model for now.