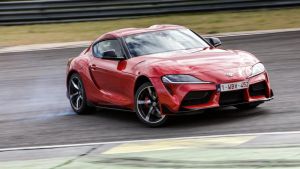 For the Fast and Furious generation, the driving fun is certainly there in the new Supra.

It’s billed as the return of a legend, but is the revival of the Toyota Supra really its swansong? Can a two-seater sports car that built its reputation on throaty three-litre petrol engine power have a long-term future as we enter the electric age?

Outlining the engineering goals set down during the development of the new Supra, a Toyota executive explained: “Fuel consumption was not part of the criteria in the car’s development. And this is the last we will produce like this.”

Ahead of the arrival of a fleet of new electric models across the industry from 2020 onwards, it seems like the car giants are rolling out some purist petrol power as an homage to the last century. While embracing the future, these long-established car brands are eager to remind us of their heritage.

The Supra is a case in point. Even though the last Supra rolled off the production line in 2002, it still has remarkable street cred and a die-hard fan base. That’s down to starring roles in PlayStation’s Gran Turismo and the Fast and Furious movie franchise. There are vibrant owner’s clubs across the globe, and no drifting festival is complete without a few Supras smoking up the track with their tyres.

With such a rich legacy to live up to, it’s hardly surprising this Supra took several years to get back on the road. First showcased as the FT-1 concept at the 2014 Detroit auto show, the public acclaim for both the concept’s styling and the Supra’s return must have encouraged the car company’s senior management.

The promise was to tap into the heritage of the Supra – and even the original 2000 GT – to create a modern sports car that adhered to the classic form.

Toyota says the Supra’s return is part of fulfilling the promise made by family scion Akio Toyoda when he became president, that the company would build “no more boring cars”.

Yet even if you take Mr Toyoda at his word, it would seem even the president of one of the biggest car company in the world can’t pursue multimillion euro vanity projects these days. So, for all the sales spin about this Supra being integral to to the brand’s heritage, Toyota has opted to partner with BMW to co-parent this performance car.

The end result is a two-seater sports car, created on BMW underpinnings for its new Z4, with BMW’s three-litre six-cylinder petrol engine mated to ZF’s eight-speed auto transmission, all screwed together in Austria by independent car producer Magna Steyr.

The decision to piggyback on BMW’s sports-car prowess has irked many purists who question how it can claim true lineage with the Japanese-born Supra of old.

Yet as Toyota executives explain, building the car from scratch simply wasn’t an option. “It would have meant a car twice the price of the new one now, and it would still be years from completion,” explained one executive.

And for all the heritage hype, sales of two-seater sports cars have been flatlining in recent years – total annual Supra sales will be 6,000, with under 1,600 cars destined for European markets each year.

Reality bites, even in the heady world of hailo brand-building models beloved by the company boss. Every car must wash its face financially.

But enough about the machinations behind the car’s arrival: the end result is a sports car that can proudly take to the road alongside rivals such as the new BMW Z4 or Porsche Cayman.

Toyota engineers are content these BMW parts are resilient enough to live up to the Toyota reputation for reliability and they’re happy with the Austrian production process. The well-regarded three-litre in-line turbocharged six-cylinder petrol engine is shared by BMW’s Z4 M40i model, but retuned by Toyota.

It puts out 340bhp and 500Nm of torque, delivering a 0-100km/h time of 4.3 seconds with launch control set-up, and a top speed of 245km/h. European versions feature an active differential that can adjust to 100 per cent lock with instant response, according to Toyota.

That means the power is properly converted into forward momentum rather than futile wheel spin.

The little two-seater is also remarkably well-balanced, with a 50:50 weight split, while the car’s body rigidity is better than the innovative Lexus LFA supercar. That in itself is a remarkable feat of engineering considering the LFA was developed with revolutionary carbon composite, while the Supra is straightforward steel.

All this suggests it’s a proper chaser for the likes of the Porsche Cayman. It’s a message that’s endorsed on the road.

One of the most impressive features of the new Supra is its composure. That’s not a word often used when it comes to sports cars, but it’s a characteristic of this car. It shows when you bury the throttle through the apex of a bend or from a standing start. There’s plenty of raspy engine roar – though not as much as some would like – but it comes without any of the drama.

During track testing sessions at Spain’s former F1 racetrack, Jarama, there were a few moments when the rear tail slid out a little, but it was always a measured dose of madness. The Supra’s rivals often struggle to lay down the same levels of power without fish-tailing.

The ride is firm, but not unduly so. While we might not want to head from Belfast to Bandon in the passenger seat, it can tackle the back roads without breaking your back.

A key trait of the Supra’s nimble handling and engaging drive is what assistant chief engineer Masayuki Kai dubs the “golden ratio”: a short wheelbase and wide track. That’s the key to kart-like agility.

With very little overhang at either end, the cabin is nestled between the 19-inch forged alloys. Behind the wheel your backside is millimetres away from the Michelin Pilot Supersport tyres. It’s a great driving position.

For those seeking to use the Supra for track days, the main focus will be on upgrading the brakes, which the one area where the Toyota falls significantly behind rivals like Porsche.

The ZF eight-speed auto box also has a tendency to intervene when you want a dramatic downshift, while power really does taper off over 5,500rpm or so, despite the red line being up at 7,000rpm. A manual version was mooted during development but there are no plans for it as yet.

Starting at €81,260, it’s a big ask for a Toyota sports car pitted against premium brands. The cabin has several features taken directly from BMW’s parts bin, such as the iDrive infotainment control and touchscreen.

That’s a big plus, for the interior parts that come from Toyota are the ones that let it down, with hard plastics you wouldn’t expect in a car in this price bracket. That’s something that needs addressed in any mid-life facelift. The Supra should aspire to a Lexus-like finish inside the cabin.

Similarly, the faux air vents that feature around the body detract from the car’s pedigree. Otherwise the cabin is spacious and comfortable, while the 290-litre boot is impressively roomy for a sports car, although it isn’t sealed off from the cabin, which is not a great feature.

For all the cynical comments about this being “Das Supra” or a Bavarian in a Kimono, the new Supra has enough going for it to stand out from the crowd. It’s not as much fun as the Alpine A110, but then you will struggle to get one of those. It did feel quite BMW at various stages during the drive, but that’s not a bad trait.

Does it have enough DNA from the originals? Perhaps not for Supra purists. But, for the Fast and Furious generation, the driving fun is certainly there. And the fact we were discussing Toyota and Porsche in the same breath is a pretty seismic shift for a car company that abandoned fun for functionality 17 years ago.