Ioniq is set to be the subbrand for its assault on electric rivals. First up is the Ioniq 5 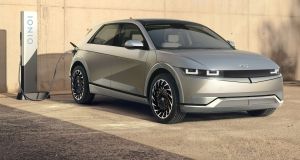 Similar in proportion to the VW ID.3, the new Ioniq 5 is built on Hyundai’s all-new electric platform, called the E-GMP.

Another week and another new sub-brand spin-out. This time its Korean auto giant Hyundai, which has designated Ioniq as its all-electric range of models to take on the likes of BMW’s i-range and VW’s growing range of ID models.

While there is already an Ioniq named model on sale under the Hyundai brand, the first of the new fleet of Ioniq models is the 5, a hatchback with a hint of crossover in its body style.

Similar in proportion to the VW ID.4, the new Ioniq 5 is built on Hyundai’s all-new electric platform, called the E-GMP, which delivers a particularly long wheelbase, coming in at 3 metres. That’s on a par with many executive saloons.

Customers can select from two battery pack options, either 58 kWh or 72.6 kWh, and two electric motor layouts, either with a rear motor only or with both front and rear motors. However, for Irish customers, only rear wheel drive will be offered.

Meanwhile, in two-wheel drive format and 72.6-kWh batterywith the larger , the company is claiming a maximum range under WLTP standards of 480km on a full charge.

The 5 is the first of a fleet of new electric cars that will carry the Ioniq name. A coupe-styled saloon and a large SUV are rumoured to be in the pipeline within the coming years, as well as smaller models.

The Ioniq-5 will be available in selected regions starting in the first half of 2021, with Irish models arriving from July.