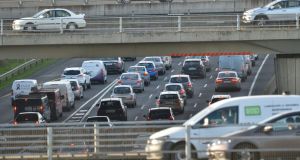 The rise in traffic volumes on the M50 is becoming an increasingly fraught topic with congestion in the greater Dublin areas now estimated to be costing €350 million a year. Photograph: Alan Betson

The opening of the Luas Cross City has failed to curb the growth in traffic usage on the M50, according to initial figures for the first five months of the year.

Despite this the Minister for Transport has again ruled out additional tolls on the orbital route to manage demand, saying that public transport projects, such as the reorganisation of bus routes in Dublin under the Bus Connects plan are the best way to deal with congestion.

In an interview with this newspaper several months ago, Minister for Transport Shane Ross said multi-point tolling on the M50 to control demand was “not a runner” and the Luas Cross-City would help ease congestion on the orbital route.

However, data from Transport Infrastructure Ireland (TII) shows the trend of traffic volume increases on the M50 during the first five months of the year is unchanged at 3 per cent, despite the Luas Cross City beginning operations in December 2017.

The TII noted the impact of significant weather events in March had complicated the year-on-year analysis but said when traffic volumes on the M50 in January and February 2018 were compared with the same months the previous year, growth was continuing on trend at 3 per cent.

Traffic volumes on the route have increased 30 per cent since 2012 as the economy recovers, promoting concerns that, if left unchecked, congestion on the route will start damaging the economy.

The Department of Transport said congestion on the M50 needed to be looked at in the context of Bus Connects, Park and Ride projects, future Luas lines and other proposed traffic measures.

It said “even if multi-point tolling were introduced on the M50, it is likely that significant charges would be required to suppress demand sufficiently”.

The department also said the fact that congestion was concentrated around the morning and evening peak times indicates it is largely related to people travelling to and from work. “Such travel patterns are not easily changed in the short term and require a range of measures.”

The Minister said in June that public transport projects, which would take years to provide, were the only viable solution to the issue.

The inexorable rise in traffic volumes on the M50 is becoming an increasingly fraught topic, with congestion in the greater Dublin areas now estimated to be costing €350 million a year and set to rise to €2 billion a year by 2033, according to the Department of Transport’s Economic and Financial Evaluation Unit. Higher traffic volumes have also led to concerns about safety on the route.

Successive ministers for transport have rejected additional tolls as a means to control usage on the M50, fearing a political backlash from drivers, and have insisted investment in public transport is the solution.

Traffic volumes on the M50 since 2012 have grown by an average of 6 per cent a year and, in some sections of the route, the rate of increase is closer to 10 per cent.

About 140,000 vehicles pass the eFlow tolling point each weekday.

However, the route also saw an average of 400,000 unique journeys per day where vehicles travelled between two interchanges or less, suggesting a significant proportion of drivers are using the M50 for short journeys.

Multipoint tolling is opposed by a number of groups including the AA which argues the move would simply shift the traffic from the M50 to other areas of the city.

Hauliers have suggested that speed limits be examined as motorists cannot enter or exit the M50 at the same speed as that set on the route.

Hauliers also want Dublin Port to stagger the arrival times of ferries to outside the morning and evening peaks to lessen congestion.

The €2 billion Bus Connects plan aims to provide 16 new high-speed routes in Dublin with the creation of 230km of expanded bus lanes and 200km of cycle lanes being built within a decade.