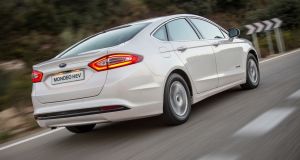 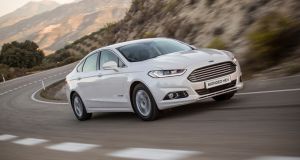 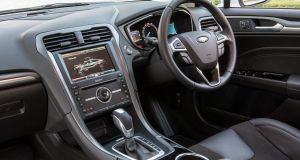 Five years, and counting. That’s how long it has taken Ford to bring the Mondeo Hybrid to these shores.

The Mondeo, badged as Fusion, has been on sale in the US market since 2013, and has right from day one had a hybrid version. In fact, you can even by a whizz-bang plug-in hybrid model of the Fusion, the ‘Energi’ so really, we’re well behind the times.

Still, late to the party the Mondeo Hybrid might be but it sure is arriving at a propitious time. To continue the analogy, the original Toyota Prius (launched in 1997) arrived when the hosts were still in the midst of making the canapés and nipping down to Spar for an extra bottle of wine.

Given the dieselgate-fuelled sudden interest in hybrid power, the Ford might just be swanning in the door just as the vodka shots are being brought out and someone’s stuck an Aretha Franklin CD on.

Speaking at the Hybrid’s arrival in the Republic, Ciarán McMahon, Ford Ireland’s managing director, said: “As this is the first hybrid vehicle launched by Ford in Ireland, this is an important step for us. With its legions of fans in Ireland, Mondeo is such a great model to offer with Hybrid Electric Vehicle (HEV) capability. We are sure that Mondeo HEV will meet the needs of customers who are looking for a more environmentally-friendly car but who do not want to compromise on space, driving dynamics, driving range and comfort.”

Legions of fans? Not quite.

As noted recently, the Mondeo’s sales figures have joined the ranks of the rest of the saloon cars in nose-diving like a drunken stunt plane of late, as buyers migrate to SUVs. However, there’s always the chance that a hybrid version might just bring the sales fillip the trusty four-door needs.

Hybrid sales (specifically petrol-electric, and no plug-ins) are up by some 66 per cent so far this year, so a similar boost to Mondeo sales would see an extra 490-odd being sold.

Is it a good, or bad thing that the Mondeo Hybrid looks so conventional?

In fact, apart from some subtle-enough hybrid badges on the flanks and tail, it’s all but indistinguishable from a conventional petrol or diesel model. Actually, the only thing that marks it out is that it’s a proper saloon, with a separate boot.

All other Mondeo models currently on sale are actually fastbacks. The reason? The installation of the 1.4kWh lithium-ion battery stack has slashed boot space, thanks to a huge panel running across the boot floor. There’s actually only 383-litres back there now, barely better than what you’d get in a Golf, and a liftback hatch would have made that much more visibly obvious.

The Mondeo’s hybrid set-up is pretty decent. The fact that it runs a lithium-ion battery theoretically puts it a step ahead of the Prius, and its engine is right on the money too. It’s a 2.0-litre petrol four-cylinder, running on the Atkinson cycle. As in the Prius’ 1.8 engine, Atkinson cycle just just a different breathing regimen for the engine, which boosts economy while reducing power. The 88kW electric motor steps in to cover those gaps, and the combined system develops a robust 187hp.

What’s crucial will be its fuel economy, and for the most part the news here is good. No, the Mondeo is not as overall as economical as the benchmark Toyota (partly, no doubt, because it lacks the Prius’s aggressive aerodynamic package) but it’s not disgraced.

Motorway runs should return just-about 50mpg, while in town you might actually get to within shouting distance of 60mpg, if you go gently and switch the air conditioning off. Co2 emissions work out art 99g/km but these are figures taken on the old NEDC fuel economy test, not the newer, tougher WLTP setup.

The CVT gearbox, with its one, constantly varied ‘gear’ is as much of a hindrance here as in the Prius, causing the engine to roar and drone at high rpm when you go looking for acceleration, but it’s not terrible, it is par for the course, and if you drive with a touch more decorum, it’s less of a problem.

Overall refinement is very good, and this Mondeo had the tightest build quality we’ve yet seen from the current model – not a single audible squeak or rattle inside, even running silently around town on electric power.

To drive, though, the current Mondeo remains a bit disappointing. It’s a little soft in its responses, a trifle slack in is suspension movements, and this particular model is definitely more detached in its steering feel than other Mondeos.

It’s fine, even very good in some respects (notably a very comfy ride quality) but the problem is that previous Mondeos have been downright brilliant to drive, and this one is simply good.

The Mondeo’s cabin is comfy, reasonably spacious, has an excellent new two-thirds-digital, one-third-analogue instrument pack, and if the SYNC3 touchscreen looks a little blocky and child-like in its graphics, then at least it’s easy to use. Pricing is good too. This well-equipped Titanium model clocks in at €32,745 and you only need to find an extra €2,500 to get a ritzy Vignale model.

So, late to the party but relatively welcome.

Ideally, you’d want the Mondeo Hybrid to have slightly better fuel consumption overall (it’s more an alternative to a petrol, than a diesel replacement) and be sharper to drive, but as a first toe in the electric water for Ford in Europe, it’s a good effort. That effort will expand, shortly, to include 13 electric or part-electric models by 2020, including a hybrid Mustang. Maybe then we’ll have a saintly, economical Ford that’s truly fun to drive.

Verdict: A solid first hybrid effort for Ford in Europe. Should really be more frugal, sharper to drive, and more roomy in the boot, though.

‘Moving overseas is daunting, but he took it in his stride’: An Irish woman walks for her dad
4

How to cook Christmas: Turkey and ham made easy
5

Andrew Jackson: the most Irish American president, and a divisive US leader
Real news has value SUBSCRIBE