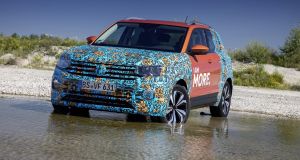 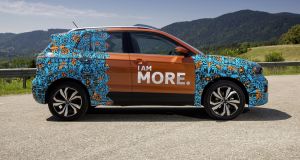 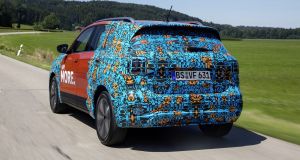 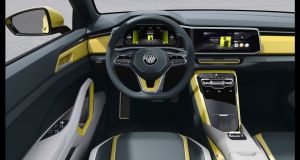 The last major piece of Volkswagen’s SUV puzzle will not be as small or as cynical as first thought. Instead of a high-rise Polo, the T-Cross promises to be a solid, conservative, smooth-riding and versatile compact crossover. A drive in a pilot-build prototype hinted at a composed, solid machine that feels more like a baby Tiguan than a junior T-Roc.

Volkswagen may have missed the early years of the SUV/crossover revolution, allowing the Toyota RAV4, the Honda CR-V and the Nissan Qashqai a few years of riding for free, but it’s making up for it now.

The third generation of the big Touareg has arrived, the Tiguan’s second generation is now offered in two formats (five- or seven-seater), the T-Roc brings some fun and funky styling, and now Volkswagen is bookending its offering at the smaller end with the T-Cross.

Everybody assumed the T-Cross was going to be to the Polo what the T-Roc was to the Golf: a high-rise, slightly cooler version of a well-established, low-riding hatch.

But the T-Cross, due on sale in about a year, is not like that at all. It is marginally shorter than the T-Roc and has more of a grown-up demeanour than its Golf-based sibling.

If anything, it’s more like a junior Tiguan than either a taller Polo or a smaller T-Roc. And, viewed in that light, it looks to be pretty darn good, if a little bit sensible and lacking the T-Roc’s visual and dynamic fizz.

It brings some good, everyday tricks with it, though, not least of which is a rear seat with 100mm of sliding adjustment (via a system straight out of the Tiguan), which helps boost the luggage area from 385 litres to 455 litres. The idea is that it can be pushed forward to tote kids and back to accommodate taller adults.

The luggage area can be increased again, to 1,281 litres, with the 60:40 rear seat folded down, and then the front passenger seat can also double over to help people carry longer stuff. The attention to the rear extends to air vents of their very own and a pair of USB connectors.

Volkswagen admitted our prototypes were about 95 per cent close to production, and the key thing they’re trying to engineer out of the production T-Cross is the bracing bar behind the rear seats that prevents a true flat floor for luggage space when the seats are folded down.

It’s a calming drive, rather than a scintillating one, with its 1.0-litre, three-cylinder petrol engine delivering enough performance from its 85kW of power and 200Nm of torque, but only just.

It’s more enthusiastic than the paperwork suggests and it’s also a lot smoother than the “three pots” of old. It’s incredibly well isolated from the cabin and hardly a single tremor or rumble makes its way to the seat or the control surfaces.

The only hint that it’s not a traditional in-line four comes at full throttle beyond about 4,500rpm, when its charming offbeat warble arrives.

But it would never be confused for fast (and neither would anything else in the class, like the Nissan Juke or the Hyundai Kona), with a 0-100km/h time of quite a lot, really.

Volkswagen isn’t yet saying exactly how many seconds this sort of thing might take, nor how heavy the T-Cross is, but it’s safe to suggest somewhere around nine or 10 seconds and somewhere around 1,350kg.

There’s an entry-level T-Cross with a turbocharged 70kW/160Nm three-cylinder engine (which will be even slower), but we only spent time in the 85kW/200Nm turbo version and the 70kW/250Nm 1.6-litre turbodiesel.

All T-Crosses will drive only the front wheels, with the base car using a five-speed manual.

Another key step (almost compulsory to meet the new WLTP emissions testing regime) is the addition of particulate filters for all engines, not just the diesel. The downside is that the T-Cross’s more budget status means it isn’t in line for electrification of any kind. No mild-hybrid, no plug-in hybrid, nothing.

Stamping on the 85kW petrol engine’s throttle pedal at highway speeds is not a scary experience. The noise rises gently, the wind noise accumulates and the speedo needle keeps climbing steadily. There’s enough torque in the lower gears, though, and it flits around urban environments without ever feeling too slow.

It can corner with surprising accuracy, change direction with clarity of purpose and stop hard and straight

The diesel was a better drive, even though it’s a less popular powertrain at this end of the market, and Volkswagen’s engineers suggested its advantages in ride quality were probably just because this particular test car was closer to production than the petrol prototype.

There’s never really a feeling that the T-Cross is missing out on anything by ignoring all-wheel drive. It runs most of the Polo’s suspension hardware, tuned for the higher and heavier T-Cross use, which means its wheel sizes range from 16 to 18 inches, rather than the larger offerings on the T-Roc.

It carries over the Polo (and Golf) feeling of being happiest to deliver in your day-to-day driving window, yet being utterly capable and competent for everything else you might want to do. It can corner with surprising accuracy, change direction with clarity of purpose and stop hard and straight.

It’s a pretty good-looking thing for the class, and a higher price point might have seen a full-width rear LED instead of the full-width reflector. It also has LED head and taillights and plenty of the usual Volkswagen sharp creasing.

The interior will be a mix of all the stuff Volkswagen has already done well in the Polo and the T-Roc, but with those modules slotted into a different interior layout.

It uses a softer-feeling dash plastic than the cheap-feeling crud on the T-Roc, and while the standard dash is an analogue dual-dial setup, there is an optional digital active info display and an 8-inch touchscreen infotainment unit at the same eye level. There is no head-up display option, with Volkswagen insisting such things are financially unworkable at this end of the market.

All in all, the T-Cross is a very pleasant surprise and rivals should be rightly concerned about its arrival – that’s if VW Ireland can get the pricing right.