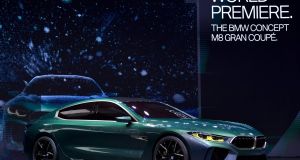 The new BMW Concept M8 Gran Coupé is displayed as World premiere at the German car maker's booth during a press day ahead of the Geneva International Motor Show on March 6, 2018 in Geneva. The show opens to the public on March 8 and runs through March 18. / AFP PHOTO / HAROLD CUNNINGHAMHAROLD CUNNINGHAM/AFP/Getty Images

BMW left it till late to pull the covers back from its Geneva show star, but the 8 Series Gran Coupe was worth interrupting lunch for — it’s spectacular (if not exactly pretty) to look at. Obviously, it’s based on the new 8 Series Coupe, which is going on sale in two-door form later this year. BMW has had such success with its four-door Gran Coupe versions of the 4 Series and 6 Series (the four-door accounts for half of all 4 Series sales) that a four-door 8 was inevitable, and here is what it looks like.

It looks challenging, for a start, but that was the idea. “The BMW Concept M8 Gran Coupe is designed to stir things up, to polarise – it should move you emotionally,” explained Domagoj Dukec, vice president for design at BMW M and BMW i. “With this car we want to reach people who are looking for something special and who want to stand out from the crowd. Here, BMW M is unmistakably taking luxury out of its comfort zone.”

Much of the styling influence comes from the compact X2 SUV — look at the way the kidney grilles pull out to a point under the headlights, and the bulky air intakes set just in front of the wheels. The rest of the shape is lean and muscular, and looks especially handsome from a rear-threequarter angle. It’s helped by the Salève Vert paint finish which moves through green to blue and even to gold depending on what angle and what light you’re using to view it.

Both 8 Series and 8 Series Gran Coupe will get a full spectrum of engines, including a basic six-cylinder turbo model, a plugin hybrid, and the 4.4-litre twin-turbo 600hp V8 from the new M5. There will also be an ultimate range-topper, using the turbocharged 6.6-litre V12 taken from the M760Li and Rolls-Royce Ghost.

At the other end of the spectrum, BMW also confirmed that it will put a new all-electric model into production in 2020. Likely called the i4, it will essentially be an electrified version of the 4 Series Gran Coupe, with some design and engineering alterations. It’ll be preceded by an all-electric version of the new X3 SUV, and succeeded, in 2021, by the so-called iNext, an entirely new generation of electric BMWs that will have longer charging ranges and more high-tech (including autonomous) functions.

Meanwhile, we do love a Subaru and we do love a Subaru estate, so it’s nice to see the new Viviz Tourer concept on Subaru’s Geneva show stand. A compact, Impreza-sized estate, it brings to mind all those happy memories of Impreza Turbo and Legacy Turbo wagons of old, even if this one is not specifically a high-performance machine. Rather, Subaru says that it’s designed to be spacious, comfortable, stylish, and very safe, featuring the next-generation of the company’s EyeSight system which “have been installed in the car to reduce driver fatigue on long journeys and enable active enjoyment of driving with peace of mind.”

A low-key Geneva debut compared to BMW’s bombastic 8 Series, but a very welcome one all the same.