Concerns over trade-wars, diesel sales, and Brexit are undermining the glamour of all the new car launches in Geneva 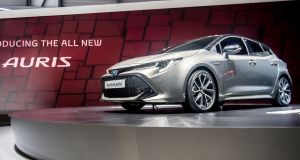 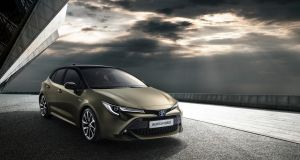 Who would have thought that a humble Toyota Auris could be the star of the Geneva motor show? True enough, the new five-door hatchback has styling that is rather more dramatic that that of its forebears, and it will hit the market with a surprisingly sporty 180hp 2.0-litre hybrid engine (previous reports had indicated that the hybrid would have much less power than that) and no diesel option, but still — against the ranks of Ferraris, Lamborghinis, Bugattis, and McLarens, this workaday Japanese hatchback has stolen the thunder of the supercars.

It helped that late last night Toyota slid the landmine of its diesel phase-out announcement in under most of its major competitors. While it’s not a total diesel model ban (the Land Cruiser and HiLux models will keep their diesel engines for the foreseeable) it’s enough to put the wind up many of Toyota’s major competitors, who still rely on diesel sales both from a cashflow point of view, and to keep their emissions levels down.

Those emissions levels are causing some consternation in Geneva. While we’re all headed, unquestionably, for an electric motoring future, it’s going to be a while before we get there, and fines for exceeding the EU’s tough Co2 emissions laws are now staring car makers in the face. The bad publicity surrounding diesel has driven customers back to petrol models, but while that’s good for air quality in cities, it’s bad for global warming. In Ireland alone, average vehicle emissions have nudged up by 2.1 per cent this year as diesel sales wane.

It’s possible, probable even, that car makers will start trimming their product ranges, excising higher-emissions models altogether, to avoid the drop in diesel sales causing them to exceed the EU’s 95g/km emissions limit.

Some, though, are hopeful that, once the air clears (so to speak) diesel will still have a part to play in Europe’s motoring future. “I am worried,” Volkswagen boss Matthias Müller said in a TV interview at the show. “But it’s our job to solve these problems. I’m firmly convinced that diesel will experience a revival.”

VW’s future is as electric as the rest, and the company showed off its luxury ID Vizzion all-electric concept car, which should form the basis of a 2022 replacement for the unloved Phaeton, alongside Audi’s all-electric E-Tron SUV concept. Not revealed in production form at the show, the E-Tron was nevertheless shown off in prototype form, covered in disguise tape, with pre-production versions whizzing silently around the roads outside. It goes on sale late this year, and will be the first of VW Group’s much-promised all-electric models to hit the market, with a claimed range of better than 500km.

Not the first all-electric premium SUV on sale though. That honour goes to Jaguar, which has launched the production version of its I-Pace at Geneva. Looking barely any different to the concept version, the I-Pace comes with a roomy cabin, 400hp, 500km range, Tesla-beating acceleration (assuming one uses the 75D version of the Model X as a baseline) and it’s on sale in July.

The I-Pace will be built in Austria, under contract by Magna Steyr but Jaguar, and its sister brand Land Rover, were voicing serious concerns over Brexit at the show, saying that it needs much more clarity from the British government (don’t we all?) before it can make a decision as to where it commits investment cash for a whole family of electric cars. “That makes the decision this year very, very critical and I don’t know whether we can make it,” JLR’s chief exec Ralf Speth told Reuters at the Geneva Motor Show. “You hardly see inward investment any more or every decision is taking longer from every faculty. Therefore it would be ... appropriate to get more information about these kinds of deals.”

Jaguar Land Rover accounts for around one-third of the UK’s total car production right now, but it has a brand-new factory in Slovakia, as well as other facilities in India and South America, if Brexit forces it to push production and jobs away from the UK.

Donald Trump’s proposed ‘trade war’ tariff of 35 per cent added to the price of imported European cars was also causing a few wobbles on the show floor, but perhaps less than was anticipated. The big German car makers, so dependent on the US market, saw falls in share prices, but most were assuming that the badly-coiffed President was merely rattling his trade sabre. Certainly PSA Peugeot Citroen Opel boss Carlos Tavares was sanguine about Trump’s threats, saying that it wouldn’t yet affect his companies’ plans to return to the US market in time.

Actually, Peugeot in particular was sitting pretty in Geneva, with the handsome — nay, outright desirable — new 508 saloon taking pride of place on its stand. Can it convince buyers out of their SUVs? Peugeot certainly thinks so, even in SUV-loving Ireland, where four-door sales have slumped to the point where car makers can almost not give such cars away. Possibly the move towards more stringent emissions and fuel economy tests will take a toll on SUV sales, though. Peugeot, along with Citroen, has ramped up its work with independent climate activists Transport & Environment to publish real-world testing results for its new models, and they show that only the most efficient compact models can crack the 50mpg barrier in real-world driving. SUVs are on the wrong side of 40mpg, even with a diesel engine.

In terms of big, silly, supercars, there was the usual Geneva bumper crop. Ferrari brought along its 488 Pista, which is the Italian for ‘track’, which boasts 720hp and race-track-ready suspension and active driver aids. Lamborghini went for a more al fresco approach, lopping the roof off the Huracan Performante to create the Performante Spyder, with its 5.2-litre 640hp engine. Bugatti showed off lighter, more agile Chiron Sport (1,500hp and a €2.65-million price tag) while McLaren showed off its hardcore Senna supercar in both street and racing GTR versions.

Porsche, arguably, had more of the measure of the current climate, showing off a 600hp four-wheel drive concept that has zero emissions. It’s the all-electric Mission E Cross Turismo and it’s an estate-crossover version of the much-anticipated Mission E electric saloon. It can hit 100km/h in just 3.5secs, and Porsche says it’s definitely production-bound, even if it was a little light on precise dates.

Across the show’s halls, Ford confirmed that the ‘Bullit’ version of the Mustang (named for an inspired by the iconic Steve McQueen movie) will be coming in right-hand drive, while Aston Martin showed a super-high-tech all-electric Lagonda luxury saloon concept, that could (possibly) reach production in 2021.

There was, of course, much talk of autonomous driving, with at least half-a-dozen concept cars boasting eyes-off, hands-off ‘Level Five’ autonomy, although people seem to be somewhat wearied by such promises, aware that even the best sensors right now can’t even deal well with rain, or (especially this week) snow. Autonomous driving seems to be a ways off yet, at least in the full-on, sci-fi sense, but the death of diesel does seem at least a day closer now than it was.

For all the glamour of the show (and the continued profusion of inappropriately-clad female models on stands, in spite of pre-show claims that this tabloid-baiting trick would be dead and gone this year) it’s that Toyota Auris that could prove to be the most significant car at the show. The first mainstream family hatchback for more than a generation to eschew diesel power, and go for only petrol or hybrid. Its influence may be only beginning.