Geneva: Sense and sensuality on show as the doors open at the Geneva motor show

New Kia, Land Rover, and Toyota revealed as trade-wars questions over the use of stand models rumble away in the background 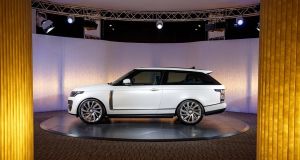 “The world is in chaos” said PSA Peugeot Citroen Opel boss Carlos Tavares as the doors opened on the 2018 Geneva motor show. Speaking in a TV interview, Mr Tavares was referring more to the threatened tariff on imported cars currently being mooted by Donald Trump, but he could of course have equally been speaking of the pell-mell rush to pull the covers off of new cars. As the doors of the Palexpo hall opened, and the dust sheets began their fan-dance, it became immediately clear that car makers are going to be offering as much sensible metal as sensual supercars for our perusal this year.

Kia (for all its family friendliness) showed right from the start that the purported ‘ban’ on using scantily-clad female models to help show off the new cars was not so much a ban, more a state of mind. Perhaps #MeToo didn’t market well with compact estate buyers.

Last night, Toyota slipped a landmine under the door of the show by announcing that, starting this year, it will begin phasing out diesel power from all of its passenger models. It was a move guaranteed to grab headlines in a world trigger-happy about all things diesel, but actually it’s a very logical move for Toyota. Aside from the PR benefits, Toyota’s diesel share has been shrinking for some time, and it’s the market leader when it comes to hybrids (ten-million-odd sales and counting since 1997).

Indeed, it comes as no surprise that the new Auris, revealed at the show today, will have no diesel option. Based on the same platform as the C-HR crossover, it will use the same 1.2-litre turbo petrol, and 1.8-litre hybrid engines as that car, which has been a huge success for Toyota, in spite of (because of?) the lack of a diesel option. The new Auris will also get a new 2.0-litre VVTI engine that the company claims is the most ‘thermally efficient’ in production. That means that it loses less energy as waste heat, and makes more of all the fuel that it burns. The standard version has a thermal efficiency of 40 per cent, while the hybrid version manages 41 per cent. Peak power for the standard version will be 169hp, but the hybrid model will have a lower power output of 144hp.

It is rather more striking to look at than the outgoing Auris too, although arguably not in a way that will frighten off Toyota’s more timid, traditional buyers. There’s no C-HR style ‘faceting’ here, but there is a ‘floating’ c-pillar (rather like that of an Opel Astra), a contrast-colour roof option, and a much more dramatic bumper and air intake than we’ve been previously used to.

Also pushing our sensible buttons this morning is the Kia Ceed (no more apostrophe, thanks) Sportswagon estate. Sister car to the already-launched hatchback, this one comes with a whopper of a loadspace — 600-litres, almost matching the cavernous load bay of the Skoda Octavia Combi, and making the compact Kia far more practical than such as the Volvo V90 and BMW 5 Series Touring.

More than half-a-million Sportswagon Ceeds have been bought across Europe since sales of the first generation model began in 2007, around 40 per cent of total Ceed sales. It will be more of a minority interest in Ireland (we’re still culturally resistant to estates) but those looking for something practical and frugal, for family life, should be looking here and not at a more fashionable, but less useful, SUV or crossover. Michael Cole, chief operating officer for Kia Motors Europe, comments: “The Kia Ceed Sportswagon has been consistently successful since its debut more than a decade ago. Tourers are particularly popular with European buyers, and the Ceed Sportswagon is no exception – since 2007, it has enjoyed almost as many sales as its five-door hatchback sibling. Created exclusively for European customers, the Ceed Sportswagon will once again prove itself as a practical and good-looking choice for customers in search of maximum versatility.”

How about something that’s less practical than it should be? How about the Range Rover SV Coupe? Now, we’re normally less than keen on coupe versions of SUVs around here (cough BMW X6 cough) but this one we might make an exception for. This is a two-door version of the current, full-size, Range Rover and it’s being made to mark Land Rover’s 70th birthday, as well as be a callback to the original 1970 Range Rover, which came only with two doors well into the 1980s. It sits lower than standard, has new front wing vents, and has a super-luxurious interior with pale leather up front, and dark blue leather in the back. No mention of the 1970 original’s ability to carry a bale of hay or a sheep, though.

Oh, and speaking of sensuality, if that’s quite the right word, Kia (for all its family friendliness) showed right from the start that the purported ‘ban’ on using scantily-clad female models to help show off the new cars was not so much a ban, more a state of mind. Perhaps #MeToo didn’t market well with compact estate buyers.