For the love of the Swede: keeping Saabs on the go on Irish roads

Seven years after bankrupcy, Saab is on its way to becoming a classic collectable 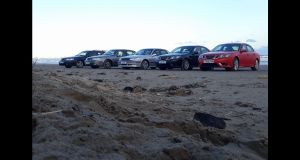 Saab’s belonging to the members of the Irish club

It was seen as the car of choice for architects and dentists, well-heeled middle-class folks who didn’t want to fall in with the German set. People who wanted to strike out on their own and show a little individualism by opting for a mass-produced Swedish car, owned in the latter days by General Motors and heavily dependent on the parts bin of Opel.

When Saab finally went bankrupt in 2011, most owners assumed the brand had no future. Were they right?

The demise of Saab was certainly a huge blow: owners have a particular affinity for the car, drawn by its sterling safety record, unique design features, turbo engine and reputation for innovation. Saab (Sierra Alpha Alpha Bravo) always played up – in hindsight overplayed – its roots in aviation, but it did mark it out as somewhat left field. And, for a car designed by Swedes, the convertible models have stood the test of time.

While Saab arguably lives in life support with new owners, few if any enthusiasts are excited about the new cars in production.

Despite this, Saab may be on its way to becoming a classic collectable. Last year, Bray-based mechanic Ian Haskins set up Saab Wisdom, a Saab maintenance and repair specialist. Meanwhile, over 550 Saab owners in Ireland are using Facebook to organise meet-ups where they talk about their cars and exchange information and advice.

Keith Jenkinson, who has been driving Saabs since around the time they went out of production, is a regular attendee at the events. “I’ve had a few different 9-3 models, starting on diesel and now on to petrol,” he says. “The last few diesels were nothing but trouble and I was spending the price of the car on keeping it running, but the petrol engines are reliable, quieter and smoother.”

Comfortable drive Jenkinson, like a lot of Saab drivers, says

they are a good comfortable drive. “I’ll drive them until the parts run dry. Best of all, they have an impeccable safety record. You could crash it into a tank and the tank would come off worse. I know that my wife and kids are safe in it.”

Susannah Love has first-hand experience of being kept safe by a Saab. “My dad built cars for Mondello when I was a child, and I spent a lot of time in the pits there. I wanted a car that was known for its safety record but which wasn’t dull.

“My first was a Saab 9000; I called it ‘the armchair’ because of the amazing seats. It took corners nicely and was an easy ride. About 12 years ago, I was six months pregnant and driving on the road between Enniskerry and the N11 when I had an accident. The car was bashed in but I was fine and so was my child. In another car, my legs may have been crushed or I would be dead.”

From there, Love’s grá for Saab continued to grow. “I kept buying them: a Saab 2.2 saloon 9-5 which had been converted to a four-wheel drive through the insertion of a winter pack. Now I have a 2007 diesel sport estate, a 9-5 1.9TID sport - it’s powerful, strong and can almost transport as much as a van. Sometimes, we are teased for driving Saabs but I find them very reliable.”

Saabs are not perfect, of course. Jeremy Clarkson once described the now defunct company as having “a chequered history, bonkers advertising and lots and lots of harebrained ideas”.

Famously, the early 9-2 models had a two-stroke engine which was only lubricated when the car was in acceleration. Later, the Saab 9000 had issues with the electrics, the plastics used between 2003 and 2007 were notoriously poor as a result of desperate cost-cutting and the build quality of 9-3 models from 2003 onwards was relatively poor leading to engine and suspension problems. Finding parts was somewhat of a problem until recent years when a number of sellers and suppliers stepped into the breach.

Perhaps the biggest challenge for Saab owners has been to find the right mechanic with a specialist diagnostic machine and who understands the intricacies of a Saab.

This is where Ian Haskins spotted a gap. “I worked in a Saab garage from 2003 and grew to love them. They were always ahead of the pack. Safety is paramount and has always been ahead of regulatory requirements. The body style on the older models stood out. The dash was always built with the concept of looking like a cockpit which comes from Saab’s origins as an aviation company, and I liked the unique and quirky features such as the key in the centre of the console.

“They were the first to have a turbo as standard whereas prior to this turbos were reserved for sporty cars. Saab were the first to be winter ready with daylights on before any other manufacturer had considered it, and that has now become standard. The petrol cars are renowned for their excellent emissions and when I do a pre-NCT on a Saab, I can be almost certain it will pass the emissions test. Overall, they are good, responsive, well-designed, comfortable and very drivable cars.”

Wily Saab drivers already have one eye to the future and some expect that particular models will become classic collectables. Jenkinson ultimately plans on parking up his current Aero model Saab and keeping it as a classic.

“I doubt that the models built from 2003 onwards will become as valuable as the 900 or older models 9-3,” says Haskins. “But the older models are really beginning to hold their value; right now, a seller could expect around €1,250 for a 2001 three-door coupe. I’m getting business from all over the country with people travelling from around Ireland for services. Saab owners love their cars and this won’t change; if anything, more people are looking at them with fresh eyes. You don’t always know what you had until it’s gone.”

Since 2011, all Saab’s assets were acquired by a Chinese consortium called National Electric Vehicle Sweden (NEVS). NEVS announced plans to build electric cars based on the 9-3 model, but after itself filing for bankruptcy protection, lost the right to use the Saab name.

After a few false starts, the electric NEVS 9-3 went into production late last year, with sales to be initially focused on the Chinese fleet market. The car has a range of just under 300 kilometres. There’s talk of expanding into Europe and opening a factory in Turkey but Saab fans are less than enthusiastic about the NEVS 9-3 and few, if any, see these new electric models as genuinely connected to Saab.

Fish and chips: How to cook them just like the chipper does
10