Skoda, Seat, and Bentley shine the focus on electric, hybrid, and even compressed gas 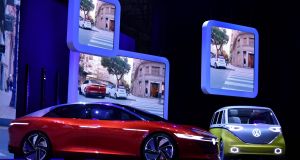 The new Volkswagen I.D. Vizzion (left is makes its world debut at the Geneva motor show

The Vision X is strikingly green. Which is not merely to say that Skoda’s new concept car, which previews (very closely) a new compact crossover to sit in the range beneath the new Karoq and the Kodiaq, is painted a lurid shade of green, but it’s striking how Skoda is picking now to start talking about a technology we thought everyone had forgotten about.

That tech is compressed natural gas, or CNG. Remember the rotten-eggs smell of all those eighties cars trying to dodge high petrol prices? Yup, like that, only more sophisticated, and apparently Skoda thinks it’s still worth a whirl even as everyone lurches towards electric power.

Skoda says that the Vision X’s 1.5-litre G-TEC engine, running on CNG, emits around 18-25 per cent less than a conventional petrol engine already, and that gets better (taking the entire fuel cycle into account) if you get that gas from biomass extraction (rotting veg, to you and me). In fact, Skoda says that when the Vision X is running on biogas-sourced CNG, it’s effectively Co2-neutral.

With a power output of 130hp, the Vision X has four-wheel drive, but it’s electric four-wheel drive; while the CNG engine turns the front wheels, the rear wheels are driven by an electric motor. The 48-volt electric system isn’t plugin, but it can store up enough energy in its compact battery to drive the Vision X, without the combustion engine, for short bursts of around 2km. Skoda says it can do the 0-100km/h sprint in 9.3secs, has a top speed of 200km/h and emissions of 89g/km.

Will it make it to production? Almost certainly. Will it come to Ireland? Not with CNG — where would you get your fuel, but expect to see the mild-hybrid 4WD system attached to the back of a more conventional petrol engine. Expect to see the bodywork make it to production — with those split-level headlights, and the name spelt out across the tailgate, with no Skoda badge — almost unchanged, and it might just be called Yeti, although Skoda’s probably more likely to go with a new variation on the bings-with-K-ends-with-Q name system.

Inside, there’s a new Skoda Connect system which includes new services such as one that helps you find on-street parking, and which can even let you rent your car out for others to use if you’re going to be otherwise engaged for a bit. This being a concept car, there’s also a pair of electric skateboards in the boot for ‘last mile’ travel in town. Good luck with that.

Not boasting the skateboards, but boasting of ‘serenity through technology’ is the Bentley Bentayga plugin hybrid. Bentley’s first half-electric model, and a “first step towards full electrification” the Bentyga plugin uses the same 3.0-litre V6 petrol plus batteries as the (mechanically related) Porsche Cayenne E-Hybrid.

That should mean around 450hp (Bentley hasn’t given a precise figure yet) and a claimed Co2 emissions level of 75g/km. Oh, and when you want to charge it up, you don’t just use any old plug — oh no, this is a Bentley after all. You use a charging unit designed by the legendary Philippe Starck, which is apparently made from a mixture of linen and aluminium. Really.

Adrian Hallmark, the new chairman and chief executive officer of Bentley Motors, said: “The Bentayga Hybrid is our first step on the road to electrification, combining traditional Bentley values with the very latest technologies. It gives customers the best of both worlds – engaging, effortless performance on the open road and silent, emission-free driving in the city, which will become increasingly important with the ever-changing regulations around the world.

“Following Bentley tradition, the Bentayga Hybrid pioneers a new automotive sector – the luxury hybrid – and sets Bentley on the path towards a sustainable electrified future.”

Finally, looking to bring a little more excitement to the alternative fuels world, there’s the Cupra (neé Seat) e-Racer. Based on the TCR racing version of Leon, the Cupra (Seat’s now-spun-off high performance brand) ditches turbo petrol power in favour of 680hp electric motor, giving it a top speed of 270km/h and a 0-100km/h time of 3.2secs.

For the moment, it’s a demo vehicle, and will be shown off at major racing events around the world throughout this year, but the intention is to go racing with it in 2019, in a new global electric touring car series.

All three form part of VW’s ‘Roadmap E’ plan to offer many more electric and plugin hybrid vehicles for sale by 2025. It’s part savvy future-gazing, part multi-billion mea culpa for dieselgate. Speaking ahead of the Geneva show, VW’s group chief executive Matthias Müller said: “In spite of all the challenges, particularly those we are facing in cities, we want to be part of the solution. I am convinced that the Volkswagen Group with its 12 brands is better placed to achieve that than any other mobility group. Because as a group, we have the dimension and the globality to really change things. Because today, we already reflect almost every facet of mobility: from the motorbike to the city bus, from budget to luxury. And because – irrespective of all the love of cars that makes us who we are and defines our success – we have understood that, ultimately, technology is always only a means to an end.”