New Mercedes-Benz CLS piles on the tech, but loses some of its style

First drive: New four-door coupe is technically impressive, but lacks some of the visual drama of old 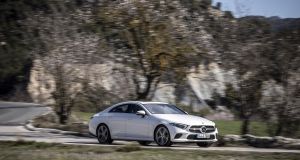 Based on the same chassis as the E-Class saloon and coupe, the CLS gets an all-new engine lineup which, for now, comprises Merc’s new 3.0-litre straight-sixes in petrol and diesel forms, and all of the petrol models are now mild hybrids This new CLS seems to have given in a bit to being generically pretty, rather than properly stunning

Waiting, in the arrivals hall of Barcelona’s El Prat airport, to be thrown the keys to the new Mercedes-Benz CLS, we were all but swept aside by a mob of the best and brightest tech-heads arriving in town for the Mobile World Congress. Full of talk of haptic screens, battery life, and 5G connectivity, it didn’t seem right to burst their collective bubble and point out that the Merc in which we were about to depart was probably more advanced than any of the electronic devices in their pockets.

In fact, the new CLS reduces a smartphone to the status of a mere key - you can (if you have a Samsung phone, or are willing to have an RIFD patch stuck to the back of your iPhone) use your touchscreen device as both key and remote control for your new CLS, unlocking and starting it, or even remotely steering it out of a tight parking space if you’ve been boxed in by thoughtless parkers. Wouldn’t want to get a door-ding on that flawless side profile, after all.

Actually, flawless or characterless? Perhaps that’s a criticism too far, but I’m definitely finding that, for all its tech, the new CLS is lacking in some of the stylistic drama of the original 2004 model. That banana-shaped car still cuts a dash (oddly, I’ve been noticing quite a few still running around) but this new CLS seems to have given in a bit to being generically pretty, rather than properly stunning. Perhaps I just need to see one at home, in familiar surroundings. Or perhaps, as with so many Mercedes of old, it will get better looking with time.

Perhaps I just need to see one at home, in familiar surroundings. Or perhaps, as with so many Mercedes of old, it will get better looking with time

The interior, too, is a little disappointing. It’s identical to what you get in the E-Class, so in isolation it’s lovely, and the quality and comfort levels are off-the-scale good, but the original 2004 CLS had an interior quite visually distinct from that of an E-Class, and it’s a bit of a shame that this one has no differentiation.

It’s already set up to be technically relevant for some time to come, that’s for sure. Based on the same chassis as the E-Class saloon and coupe, the CLS gets an all-new engine lineup which, for now, comprises Merc’s new 3.0-litre straight-sixes in petrol and diesel forms, and all of the petrol models are now mild hybrids. Four cylinder engines are coming, again in mild hybrid form where petrol is burned, but for now it’s all sixes.

No complaints here, even when one of those sixes is a diesel. For anyone wondering why, with all the awful publicity surrounding diesel power, and especially Teutonic diesel power, people are still buying cars with black-pump badges, a few minutes behind the wheel of a CLS 350d 4MATIC will provide the answer. The answer is; it’s lovely.

It’s so turbine-smooth and quiet that, for most of our test drive, you’d have been hard-pressed to tell there was an engine running at all. Performance was exceptionally good too, with a sub-six-seconds 0-100km/h run, but 55mpg economy and Co2 emissions, on the harsher WLTP fuel economy test, of 148/km. No matter how loud the background noise of emissions cheating and monkey experiments, it’s hard to deny the appeal of a car that goes this well, sounds this silent, and greets you with a four-figure distance-to-empty readout.

You could switch to petrol, I suppose, but actually the CLS 450 petrol model proved to be a touch disappointing. Six-cylinder and 3.0-litres again, with both a turbo and the new ‘EQ Boost’ 48-volt mild hybrid system, it’s certainly quick (4.8secs 0-100km/h) but surprisingly drone-y at middling speeds, intruding on your serenity rather more than the diesel.

At least both cars are equally pleasant to drive. The CLS is a four-door (and a surprisingly practical one - a 520-litre boot, almost an excess of rear legroom and, for the first time, a central rear seat) but it performs the duties of an old-school coupe Grand Tourer. It’s quiet and composed, relaxed but capable of invigorating on the right road, and utterly effortless.

It’s quiet and composed, relaxed but capable of invigorating on the right road, and utterly effortless

Which is not to say it’s distant nor detached - you can certainly enjoy hustling your CLS on a twisty road - but its metier is settling in for an endless cruise to the far horizon, coddled by an arm’s length list of safety features (lane-keeping steering, radar cruise, anti-collision brakes, and steering that swerves you around careless pedestrians are just the highlights).

If, however, you wish your pulse rate to be raised a touch, the CLS can oblige. It’s the debut model for the new AMG 53 mild-hybrid, which uses the same 3.0-litre straight-six as the CLS 450, but which explodes all around you, rather than drones.

It’s not the full-on experience of one of AMG’s massive, and massively powerful, V8s, but instead is rather reminiscent of the original six-cylinder AMG E-Class of the 1990s. The new engine is refined and crisp, but capable of serenading you with an intoxicating high-rev howl, one that eggs you on to keep the throttle pinned and the corners coming at you fast.

The chassis, which uses the same multi-link front and rear suspension as the rest of the CLS range, but with adaptive air suspension and 4MATIC four-wheel drive thrown in, is deft and capable, perhaps lacking the last nth of involvement that you get from the best BMW M-cars, but which allows you to fling the CLS 53 around with a confidence and a sense of enjoyment that’s rare.

It too is technically advanced. As well as the 48-volt mild-hybrid system (which chips in an extra 22hp and 250Nm of torque to the already-ample 435hp and 520Nm) there’s also an electric turbo for low-speed response. Not only does the electric turbo spin up all-but instantaneously to eliminate turbo lag, it also huffs spare air through the conventional, exhaust-driven turbo to speed up the responses at higher RPM. The result is an engine which feels ludicrously muscular across the entire rev range, yet which returns a saintly (by AMG standards) 200g/km of 8.7-litres per 100km.

The 350d (there seems no point in paying the extra to trade-up to a 400d) will be the best-seller in Ireland for now, at least until a new 250d four-cylinder diesel model arrives. Mercedes Ireland reckons it will shift around 140 in a full year, a surprisingly large number given (a) what an excellent car the more affordable E-Class is and (b) how much extra the CLS is going to cost (around €78,000 for a basic model).

Pretty enough? Not sure yet, to be honest, but there’s no question that when it comes to engineering and technology, this new CLS is little short of a tour-de-force.

Verdict: Perhaps not as outright gorgeous as it should be, but excellent to drive and with a fantastic diesel engine. AMG 53 hybrid is a proper thriller.