Geneva: Renault wants to launch an EZ robo-taxi service, while Audi shows off its all-electric prototype

EZ-GO is a vision of a futuristic, fully-autonomous ride-hailing service from Renault. Audi’s E-Tron Quattro goes on sale later this year. 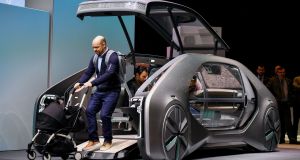 When was the last time that we got excited about a concept car that was limited to 50km/h? Can’t remember to be honest, but that’s the case with Renault’s big Geneva show noise, the EZ-GO concept, which is both car and service.

The EZ-GO is a fully autonomous (Level Five autonomy, so no steering wheel, no pedals, no nothing) city-bound pod that’s been designed to form part of Renault’s proposed ride-hailing service of the same name.

Ordered either through a smartphone app, or from a physical kerbside station (rather like a Dublin Bike) the EZ-GO would swoosh up to you, indicate where it’s going to stop with a lighting system, and open up it’s dramatic clamshell door, that basically means the whole front end of the car opens like a glassy mouth, allowing walk-in access for up to six passengers, who can spend their journey working, chatting, reading, or even snoozing.

Renault wants both car and service to be integrated into city life at both the governmental and private service level, and says that the plan offers “a highly competitive price/mile ratio.” The French car maker claims that the EZ-GO makes for the perfect city vehicle, not only because it’s low-slung, compact, and has big windows out of which its occupants can see, but because it’s a zero-emissions electric car that, thanks to its low, limited top speed, can actually use batteries that have been recycled out of more powerful, private, electric cars. Renault doesn’t actually quote a one-charge range for the EZ-GO, as it’s basically immaterial to the user — the car will go off and charge itself when it needs to.

It’s also designed for full access by all members of the community, or as Renault says “people who can no longer drive, people who cannot drive yet or who are unable to drive. Its shallow angle makes it easy for people to get in with a suitcase on wheels, a stroller, a wheelchair, or even on crutches. Its benches are comfortable and made for lounging, without division between passengers; and its screens show useful information about the city that helps everyone, even those who don't use Renault EZ-GO.”

While the EZ-GO does boast Level Five autonomy, it’s likely that Renault will launch an EZ-GO ride-hailing service by 2022 using simpler technology. It’s also working, with its alliance partner Nissan, on a ‘mission control’ system for autonomous ride-hailing, which uses professionals who can monitor the progress of a self-driving cab, and take remote control if the car encounters a problem with which its software can’t cope.

Audi, meanwhile, is showing off its E-Tron Quattro prototype at the show, and unlike the EZ-GO it’s a rather more conventional, rather more immediate vision of electric motoring. In fact, it’s due to go on sale at the end of this year, built in what Audi says is a ‘carbon neutral’ factory in Brussels.

Sized roughly between the current Q5 and Q7, Audi isn’t giving away many technical details about the car for now, but you can certainly see the relatively sleek SUV shape under the minimal camouflage. It’s expected to have a roughly 500km one charge range, and Audi says that it’s been designed around 150kW ultra-rapid charging, so that it can take on long, cross-continent trips with short 30-minute stops for more juice (and a coffee) as you go.

“Audi sets an important milestone for the company’s future with its first purely electrically powered model,” said Rupert Stadler, chairman of Audi, who’s come in for much criticism in recent months for his role in VW’s dieselgate scandal. “In 2020 we will have three all-electric vehicles in our product range, with a four-door Gran Turismo – the production version of the Audi e-tron Sportback concept – and a model in the compact segment joining the sporty SUV. We will be launching more than 20 electric cars and plug-in hybrids by 2025 – spread across all segments and concepts.”

Stadler went on to point out that Audi has built some 250 prototypes of the E-Tron Quattro, and spent the past few years pounding them into the ground in locations such as the Nurburgring race track, in -20-degrees cold in Scandinavia, and +20-degrees heat in desert conditions. More than five-million kilometres of testing have been covered already, and final testing is set to continue until the end of this year, when the car will go on sale.

In the meantime, Audi is running some of the prototypes, covered in camouflage wrap, on the roads around the Geneva show, giving show-goers the chance to play at being a spy photographer.

Do you really need to take supplements during pregnancy?
5

Ask the Expert: My teenage daughter doesn’t talk to me
10