The once ubiquitous family saloon will be no more 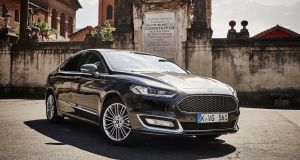 Would it be too much of a pun to say sic transit, gloria Mondeo?

We’ve known it’s been coming for a long time, but even so it seems sad to note that Ford has just officially signed the Mondeo’s death warrant.

According to a Ford statement: “As a result of growing change in customer preference” the current Mondeo, the fourth model to bear that name, will be phased out in 2022.

Those who were assuming (and we were among them) that an SUV-style replacement, possibly badged Mondeo Evos, would follow look likely to be disappointed. Ford has given no indication that a replacement model is on the way.

We know that a Mondeo-sized crossover vehicle exists, having seen spy photographs of just such a car, but it is looking increasingly likely that this new Mondeo (if indeed it’s to get that name at all) will be for the US market, and not for Europe.

Here in Europe, and Ireland, Ford will instead concentrate on the existing Focus and Fiesta both of which are due to get plugin-hybrid powertrains, and both of which will probably be given a major facelift and re-engineering job to keep them competitive through to 2030, when Ford wants its entire lineup to be electric.

The strong-selling Kuga SUV will now be the lynchpin of the Ford lineup in Europe, although the good news is that the S-Max and Galaxy MPVs will continue on sale. Both those cars share a chassis and engines with the Mondeo, but will get a stay of execution. Both cars now come with hybrid powertrain options.

Having binned off the Mondeo, Ford will start concentrating on its electric transformation.

The much-anticipated all-electric Mustang Mach-E SUV goes on sale shortly, while Ford is currently refitting its factory in Cologne, Germany, to build a new lineup of all-electric passenger cars, which will use the MEB platform under licence from Volkswagen.

The first of these new electric Fords will go on sale in 2023. By 2026, every Ford model will offer either a fully-electric version, or a plugin-hybrid.

That investment in Cologne, worth $1-billion, is part of a $22 billion global spend on electric car research and development.

Ford’s factory in Valencia, Spain, will switch from building the Mondeo, Galaxy, and S-Max to just the two MPVs, but will get a new production line to build the 2.5-litre petrol engine that forms the core of the hybrid and plugin-hybrid powertrains for those two cars, and the Kuga.

“Today is another step on Ford’s electrification journey, providing a bridge to an all-electric passenger vehicle future, and demonstrating our continuing commitment to our manufacturing operations in Valencia where we have invested around $3 billion since 2011,” said Kieran Cahill, vice president for manufacturing at Ford of Europe.

We’ll miss the Mondeo, though. Launched in 1993, as a replacement for the then-aged Sierra, the first Mondeo was an instant critical and commercial hit, and put Ford at the forefront of enthusiast’s minds with its sharp handling and steering.

The Mondeo badge has been on some five million cars since then, but those sales have tailed off sharply in recent years, as customers have deserted traditional saloons in favour of SUVs and premium-badge models.

Would it be too much of a pun to say sic transit, gloria Mondeo?