73: Ford Mondeo – Should be a winner but quality bugs holding it back

Top cars for 2018: Losing out in the race towards SUVs 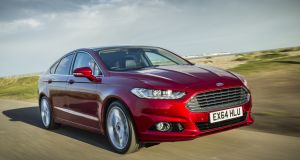 The Ford Mondeo, in its current form, should be an out-and-out winner. Why? Because it looks so darned good. Thanks to having been developed in tandem with the US-market Ford Fusion, the fourth generation Mondeo inherited smooth, American good looks from across the pond, and from the front in particular, that massive grille, combined with the narrow lights, looks really good.

It’s nice inside too, even if the infotainment and instrument layout is rather messy. There’s plenty of space front and rear, and very comfy seats too. There are problems though, and the biggest one is quality. Early versions of this Mondeo squeaked and rattled like 1970s Rovers, and while much has improved, we’re still slightly concerned.

The second issue is handling - the Mondeo is just not as good to drive as its predecessors, and its predecessors were benchmarks. Over-priced Vignale version is just plain silly, sporty-looking ST-Line is much better, and don’t overlook the excellent 1.5 EcoBoost petrol in favour of the default diesels.

Sum-up: Really handsome, and there’s good value to be had, but handling and quality come up short.