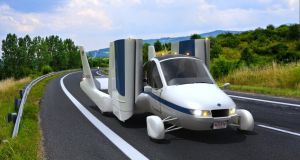 Have we just moved a step closer to a flying Volvo? That is the tantalising possibility brought about by the announcement that Chinese car making giant Geely (which owns Volvo) has just bought long-gestating flying car company Terrafugia.

Speaking about the buy-out, Terrafugia founder and its chief technical officer Carl Dietrich said: “We started Terrafugia with a vision to change the future of transportation with practical flying cars that enable a new dimension of personal freedom. Now as part of Geely Holding Group I am confident that we can reach that vision and subsequent commercial success by utilising the group’s shared global synergy.”

Geely’s billionaire founder and chairman Li Shufu said “Our investment in the company reflects our shared belief in their vision and we are committed to extending our full support to Terrafugia, leveraging the synergies provided by our international operations and track record of innovation, to make the flying car a reality.”

So, the next Volvo will presumably be a levitating XC60, yes? Well, no, not for the moment anyway. Geely is clearly playing something of a long game here. Hot on the heels of news that Airbus intends to flight-test its single-seat ‘Vahana’ flying car by the end of the year, and that Toyota is investing heavily in flying car tech, hoping to use a prototype to light the Olympic flame when the games come back to Tokyo in 2020, Geely is clearly trying to hedge its bets when it comes to the future of personal aviation transportation.

Terrafugia was founded in 2006 by Carl Dietrich, Anna Mracek Dietrich, Samuel Schweighart, Alex Min, and Arun Prakash - all graduates of Massachusetts Institute of Technology and the MIT Sloan School of Management.

The goal was to create a flying car - although not quite a car that can turn into a ‘plane at the touch of a button. Terrafugia’s idea is effectively the other way around; a light, ‘sports ‘plane’ (and the definition is specific as under US law you need half the amount of instruction and licence passing for a sport ‘plane than for something more sophisticated or powerful) that can be driven as a car between home and local airport, before converting to an aircraft.

The team has been at least partially successful. It’s prototype, dubbed Transition, might look awkward (rather like a Cessna with its wings folded back) but it has driven on the road, and in 2012 successfully made its maiden flight and flight test programme debut.

It’s likely that Geely will turn Terrafugia in a slightly different direction, though. The concepts being worked on by Airbus, Uber, and others are less flying cars, per se, and more small, electric-powered, personal helicopters, governed by autonomous control rather than a gung-ho chap in aviator sunglasses and a leather jacket. There are more than a few experts prepared to gamble significant sums of money and development time that an on-demand service for such aircraft could be lucrative in the future, delivering a personal air-taxi service at a cost that’s relatively affordable, thanks to the price being spread across multiple short-hop journeys and journey sharing.

Which means that the idea of a flying Volvo is rather less likely than a project combining Terrafugia and another of Geely’s subsidiaries - the London Taxi Company, maker of the famous black cabs