78: Suzuki Vitara – One of the better small SUVs

Top 100 cars for 2018: Cabin remains rather poor but it offers good value for money 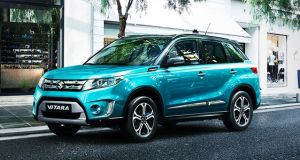 As a species in general, small SUVs have hitherto been less than impressive. Perhaps that is now changing with the arrival of such cars as the VW T-Roc and Audi Q2 (essentially the same car) but for the most part, these small SUVs are inferior to the hatchbacks upon which they’re based.

Except, that is, for the Suzuki Vitara. It’s hardly the most exciting and definitely not the most luxurious car you can buy, but it is rather impressive and not a little endearing. It looks sharp (hard to believe that the same company penned the bland Baleno) and drives quite neatly, especially so if you go for the overtly sporty 1.4-litre turbo petrol BoosterJet S model.

The cabin is rather dark and cheap in places, but then it’s not an especially expensive car, and it is at least roomy both in the interior and the boot, so there’s compensation. Get a 4WD model and it’s also actually pretty good off-road, a fact which may actually alarm some owners. There’s also the bonus that, being an affordable Suzuki, it sidesteps some of the pointless posturing of rivals.

Sum-up: A simpler sort of small 4x4, that actually can off-road when you want it to.