56: Honda CR-V – Should be a star but losing out to Japanese rival 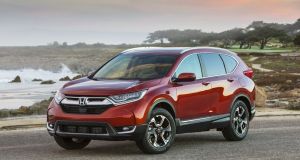 The fact that diesel sales are, generally, falling and that you can’t buy a diesel version of the CR-V should have been a sales boon for the big Honda. But it hasn’t been, which is something of a shame. It seems people still crave an oil-burner in their mid-size SUV, and the CR-V’s lack of such seems to be hurting its sales prospects.

Which is a bit unfair, as this is still a very impressive all-rounder, probably best sampled in its basic 1.5-litre turbo petrol form. Equipped as such, it’s very refined, quite brisk, and not as thirsty as you might imagine.

The only black marks against it are that it’s not as crisp to drive as the previous CR-V, and the interior suffers from cheap-looking digital instruments and a truly awful infotainment system.

Still, it’s hugely roomy, and built like a tank (in the Honda tradition) so there’s a lot going for it. Hybrid version uses a fearsomely clever system (there’s no gearbox, as the wheels are driven constantly by the electric motor) but it doesn’t feel as flexible, nor is it quite so economical, as the rival Toyota RAV4.

Sum up: No diesel? No problem.

* A note on Co2 figures: For almost all the cars in the Top 100, we’ve quoted the stricter WLTP figures for Co2 emissions. A few are still quoted on their older NEDC2 figure, and that’s the number they’ll be taxed on. If you’re confused at all, just consult your local dealer for specific data for the make and model in which you’re interested