Top of this landlord's mental hit parade of traumatic renters has to be the group who smashed the furniture to pieces, threatened physical abuse and defecated on the carpet 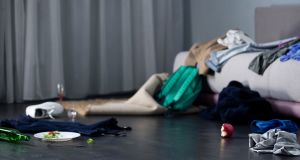 ‘They smashed plaster off the walls and kicked in windows’. Photograph: iStock

Over the years I have had many thousands of tenants but it is a sad fact that the good tenants – the overwhelming majority – have almost completely drifted out of my mind. I can recall, and indeed keep, kind notes and gifts given by extremely thoughtful young people who take the time and trouble to be thankful for being well looked after, or to note the pleasure derived from living in a particular home at a special stage in their life. It makes a real difference to receive these tokens of appreciation.

But, rather like a James Bond movie, it is the far fewer but memorable villains who linger longer in the mind. I have my own mental hit parade of traumatic renters and in reverse order, here are the top three.

The couple in third place were most disturbing because I actually used to live in the adjoining semi. They got into considerable rental arrears and when they were contacted they would claim to be away in a city hundreds of miles away, even though I could hear them speaking on the other side of the brick wall.

But that was not what made them most difficult. They would have furious rows with each other, culminating in what seemed like sounds of physical abuse, creating a dilemma as to what extent should there be third-party intervention. Difficult for any neighbour, but particularly complicated for a landlord combining concern over their welfare with managing a difficult contractual relationship.

In comparison, nightmare tenants number two were far more straightforward – they simply had no intention of paying any rent whatsoever.

They were students and by a clerical omission had not been properly referenced. When, after living at the property for several months without paying rent, their previous landlord was contacted it turned out they hadn’t paid him rent for the whole of the previous year.

When they finally left . . . they defecated on the carpet as a parting gift

Most people who fail to pay rent do so because of sudden financial difficulties, but these were “ideological” non-payers: they never had any intention of paying anything.

Back in the day I took it as a matter of principle that they should not get away with it – I ended up writing 100 letters in pursuit of the arrears, which were in the end cleared in full, but it was a huge strain to recoup something which should have been paid as a matter of course.

And in number one position is the group of dropout male students who not only mostly failed to pay their rent, but terrorised the female students in the house next door, shouting abuse through their letterbox in the middle of the night and daubing graffiti on their walls.

Prompt action was taken by contacting the anti-social behaviour unit of the council, the police and their university tutors.

Most young people respond to this type of pressure but this particular group went more and more insane. They smashed to pieces all the furniture, smashed plaster off the walls and kicked in windows. At one point, after they had put all the broken furniture into a great pile, I seriously feared they would set it on fire and burn the house down.

When they finally left, after threatening physical abuse to my staff, they defecated on the carpet as a parting gift.

How were they let in in the first place? I had made the mistake of offering a small “letting bonus” to a young employee at my office for any properties he managed to let on his own. He let precisely one property – this one – and was so keen to get his small bonus that he ignored all the usual checks which would have set alarm bells ringing.

I wish I could reset my mind and remember more clearly the hundreds of reasonable, nice young people who have treated the properties with respect and good manners, but alas they tend to have been forced out of my consciousness by the handful of thugs.

To anyone who has enjoyed a perfectly civilised rental property arrangement, thank you – being on the hit parade of notoriety is one claim to fame everyone should avoid.