Priced out of Malahide? Look across the estuary to Donabate

The seaside village is beloved by golfers, and is less pricey than other coastal areas 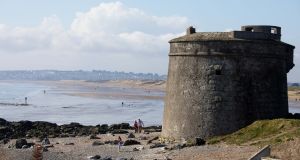 Located 12 miles northeast of Dublin city centre, the village of Donabate is to be found on a peninsula north of Malahide and south of Rush. In truth, the village is not more than a stretch of road on Main Street which leads on to the Portrane Road, and is a linear-style settlement that is so common in rural Ireland.

On all sides lie a host of amenities that give Donabate a laid-back, day-out feel: there are several golf clubs in the area, Donabate and Portrane beaches, Rogerstown and Broadmeadow estuaries, as well as field upon field of green farmland.

It’s an idyllic spot that has also seen plenty of construction take place since the Celtic Tiger era, but Donabate has managed to retain its small-town charm. It draws in more than its fair share of beach day-trippers, who congregate at Scrumdiddly’s for ice cream after strolling along one of Dublin’s most beautiful stretches of coastline. Donabate’s picturesque, semi-rural location alone marks it out as one of the most desirable towns to reside in north Co Dublin.

The town was small at the turn of the 20th century with less than 100 residents. It remained a small enclave until the end of that century and into the 21st century. Building bursts then followed in the 1970s and during the Celtic Tiger, dramatically increasing the population of the town to over 7,000 in the 2016 census.

And with more new builds on the way, that community size is set to increase as the Celtic Phoenix continues to rise.

What housing stock is available?

The stock in Donabate is high in number and also of a very wide variety, catering for most steps on the ladder. The locations are also diverse, with some in the town itself, and others located along the more rural roads towards Donabate Beach. Others are also located rurally towards sister town Portrane.

The extremely competitive price of €125,000 is the asking price at the lowest end of the market: a one-bed, one-bath apartment at Turvey Woods at the southwestern end of town. For €225,000 one can bid for a two-bed apartment at Station Court close to the heart of the town.

The lowest price for a house is €295,000, which puts one in line to buy a three-bed, semi-detached at Turvey Grove. At €315,000 one can buy a three-bed, three-bath, terraced house at Beverton Close.

At the top of the market for €710,000 one can buy a five-bed, detached on the Beaverstown Road or a five-bed detached at 41 Beaverbrook for €795,000. A cool €2.5 million will get you into the territory of being able to afford a five-bed, country house at Seafield Manor.

Any new developments in the pipeline?

There is plenty of land ripe for construction around both Donabate and Portrane, and that is attracting developers. Four new developments are currently in motion.

Beresford is on Turvey Avenue, an approach road to the town from the M1, and brings “three- and four-bed townhouses, semi-detached and detached homes to the market, with the development starting construction in 2015, with 150 units built so far and the next phase consisting of 250 in total, which will be completed by 2023. The current phase for sale is 37 houses, which were released three weeks ago, with four left for sale,” says Aidan Hora of Hora Property Consultants.

Glaslinn is located in the centre of the town and consists of three-, four- and five-bed homes “with 31 units in total, the first phase was 16 units, and there are still three- and four-beds remaining for sale. The next 15 units will come online in the net four to six weeks,” says Dermot Grimes of REA Grimes.

Rahillion is located at the northeastern end of the town and consists of three-, four- and five-bed homes, “90 units have been sold since April, with 30 units still on the market”, according to Damien Dillon of Dillon Marshall Homes.

Kingsland is the final development, also located at the northeastern end of the town. It consists of 29, four-bed, semi-detached homes, of which “just over half have gone sale agreed”, according to John Farrell of Hooke and McDonald.

Despite its rural location Donabate is very well connected transport-wise. The M1 is a short drive from the village, and brings one right into the heart of Dublin city in 25 minutes off-peak, and the same time north to Drogheda. Dublin Airport is a 10-15-minute drive away.

The town is also served by a rail station, which has a direct line into Connolly Station, which takes 20-25 minutes. The town has two bus routes, the 33B and 33D, and both services also serve Portrane. Donabate might be quiet and bucolic, but it’s only a stone’s throw from more urban areas.

A wide range of people are looking to set up sticks in Donabate. The proximity to both the city and the airport makes it an ideal base for young professionals, with a lot of airport and airline workers seeing it as the ideal place to get on the property ladder with a short commute to the office – or the plane in many cases.

Other professionals, working in the IFSC and other city centre areas, view the excellent transport connections as a major reason to buy.

Families are attracted to the area for the rural vibes and affordability of housing, as well as the range of prices.

“Buyers are looking at Donabate instead of the higher-priced Malahide and Portmarnock, ” says Sean Nolan of the Donabate-based Property Team Nolan & Fahy estate agency. “We also see a lot buyers that are trading up or down from within Donabate itself.”

There’s also buying interest from outside Dublin, with people from Drogheda and Northern Ireland looking to buy close to that M1 route towards their home towns. South Dubliners are also taking note of the prices the coastal town brings to the table.

Both villages in Donabate and nearby Portrane are small but pack in plenty. Donabate has two pubs: Smyth’s Bridge House and Keelings – the latter does decent grub. In the town itself there is an Italian restaurant Pasta Castello, which is well regarded by locals, as is Chung’s Chinese. Cates Café ticks the boxes for a good panino and cappuccino, and is adjacent to the only supermarket in town: SuperValu.

Down on Donabate Beach is the Waterside House Hotel, which does European-style food and pints, and which has a refurb planned.

It’s a decent offering all in all, but there would certainly be room for more, especially on the catering side of things, which will likely happen in time as families move into the newly-constructed developments. Indeed, a new coffee shop, An Bácús Beag, is due to open on May 1st on the Portrane Road.

Education is also covered largely within the town, with separate boys’ and girls’ national schools, as well as an Educate Together at primary level. Ten years ago Donabate Community College opened, which caters for secondary education in the town. There are also other education options nearby in Swords, Malahide and Skerries.

Donabate’s setting is its biggest draw. Both Donabate and Portrane beaches are beautiful coastal locations with quite spectacular views over the Irish Sea and along the coast, with a cliff walk frequented daily by both locals and tourists. Broadmeadow Estuary offers watersports such as kayaking, sailing and windsurfing.

There is a huge amount of rural and green space all around Donabate, but the jewel in the crown is Newbridge Demesne, a Georgian mansion surrounded by 360 acres of grounds that includes a working farm, a park, woodland and a cafe. The house, long owned by the Cobbe family who now retain the use of the top floor, is open to the public, and has a fine collection of Irish furniture and portraits.