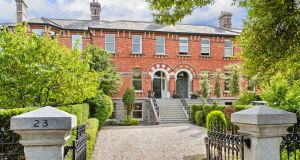 The biggest Dublin residential sale of 2020 took place quietly during the first lockdown and, unsurprisingly, it was a south Dublin coastal site – guaranteed to hit the high notes every time.

Number 2 Castle Place, located between Sandycove and Dalkey, occupies one of the best sites in the area with 29m (96ft) of ocean frontage, direct access to the shore and uninterrupted sea views.

Selling for €6.2 million in September, the buyer of the Breffni Road property got two houses – Seaspray and Windward – on one 0.17 hectare (0.44 acre) site. Owner and telco entrepreneur Iain MacDonald originally bought the property in 2012 for €3 million, and went on to secure planning permission to refurbish the original home on the property and build a detached contemporary 465sq m (5,000sq ft) five-bed across the width of the site closer to the seashore.

The buyer is businessman Barry Connolly, of Richmond Marketing. He is currently selling a very fine art deco-inspired five-bed home, Birchfield, on Westminster Road in Foxrock seeking €2.95 million. Both Birchfield and Seaspray were distinctively designed by de Blacam & Meagher Architects. Rory Kirwan of Lisney and Daphne Kaye were joint selling agents on the Sandycove deal.

Back in Dublin 6, Thorndale in Dartry, Co Dublin, was a more conventional Grande Dame when it went on the market in May 2019 seeking €5.4 million. Described at the time as “the swankiest house on the Luas Green line” thanks to its location virtually on the Milltown Luas stop, number 31 Temple Road, turned up sold on the Property Price Register in mid-April for €5.6 million.

Sherry FitzGerald selling agent Geralyn Byrne brokered the sale of the fine Victorian but declined to comment on the details. The owners had only bought the 495sq m (5,330sq ft) property in walk-in condition for €4.75 million in 2014. The plan had been to use it as a Dublin base from their home in the country, but it never quite got the use. The undisclosed buyer intends to use it as a family home.

Heading north of the city to Howth, and arguably the finest coastal stretch in the capital, Bracken Hill on Thormanby Road popped up on the Property Price Register as sold for €4 million in July. A fine home with gardens running down to the sea, the property was owned by Michael O’Callaghan and sold quietly off market through local agent Joe Kelly who it’s understood had been seeking €4.5 million.

Nearby Long Acre appeared sold on the price register for €2.5million in August in an off market sale through agent Gallagher Quigley. It’s understood the full  sum paid was around €3m when the land consideration is accounted for.

It represents another big sale along this unrivalled stretch where a vast contemporary home next door, Carnalea, sold for €5.5 million in 2015 and a couple of doors farther down Danes Hollow, former home on 1.2 hectares (3 acres) of Riverdance duo Moya Doherty and John McColgan, sold to concert promoter Peter Aiken for €8.2 million in 2017.

The buyers of Bracken Hill, a retired businessman and his wife, are local to the area, having lived close to the Baily for many years before moving briefly to an apartment in Howth and deciding to return again to recapture those sea views.

The fourth biggest sale of the year, at €3.65 million, took place in Ballsbridge, Dublin 4, and is so recent that it has yet to appear on the Property Price Register having just closed in late November. Number 23 is a Victorian terraced six-bed, slightly smaller than its semi-detached and detached neighbours but still running to a substantial 403sq m (4338sq ft). A receiver sale, it was hotly anticipated and sold almost immediately after it came on the market through Hunters in September seeking €3.35 million. Two keen bidders drove the price upwards to €3.65 million providing a neat ending for agent Bobby Geraghty who has now completed a three-in-a-row hat-trick of sales on numbers 23, 25 and 27 Ailesbury Road.

On the same road, at the Donnybrook end, number 70 Ailesbury Road completes the top five sales. A very different proposition to number 23, number 70 when it launched to the market in 2018 seeking €4.25 million was described as a refurbishment, but so extensive was the job that it was essentially a new build. Conor Rhatigan, of the Winterbrook building family, purchased the original property in 2016 for €2.25 million and architect Allister Coyne of Ailtireacht transformed it to a high-end contemporary home. The property appeared sold on the price register in January for €3.5 million and was brokered through Simon Ensor of Sherry FitzGerald who declined to comment on the identity of the Irish buyer.