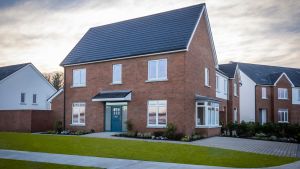 While it has lain empty for years, Belcamp Hall is a historic Dublin property with a connection to America’s founding father, George Washington, in a memorial located on the grounds. This week marks the beginning of a new era for the estate with the launch of a development by housebuilder Gannon Homes.

The site, comprising more than 200 acres of former agricultural land, was bought by developer Gerry Gannon in March 2004, for €105 million, but had lain dormant until now with the main house blighted in the intervening period by several fires, the most recent one taking place in May of this year.

A former boarding school and seminary, 12 Harry Clarke stained glass windows, an altar and other effects have been placed in storage, says Julie Gannon, director of residential at Gannon Homes: “The immediate plan is to put a temporary roof on it and on the main houses.”

The developer and its conservation consultants are in talks with Helena Bergin, architectural conservation officer for local authority Fingal County Council to finalise and agree a conservation-led strategy for the repair and re-instatement of Belcamp Hall and chapel.

“One of the main reasons we got planning [for the land development] was that we are going to restore and protect the main house and the costs have been factored into the overall building costs,” Gannon says.

Past pupils of Belcamp include golfer Philip Walton, and Emmy and IFTA award-winning actor Brendan Gleeson taught there. The main house, which features an oval room modelled on that of the White House, was built in 1763 for Sir Edward Newenham, a member of the Irish parliament and an ardent supporter of the Republican Party in the United States. He built a memorial tower to George Washington in its grounds and it will form part of the scheme’s extensive landscaping when complete.

The stately home at its heart has provided the inspiration for the design of the brand new A3-rated three- and four-bedroom homes that are being sold in this debut phase of 41 homes.

The generous-sized properties have large windows, near-silent air-to-water heat pump systems in the roomy utility rooms and decent-sized gardens – all qualities that have come into sharp focus as a result of Covid-19, says Ronan O’Driscoll, chairman of selling agent SherryFitzGerald.

The prices appear competitive too for a Dublin-based new homes scheme, situated within the city limits and about 7km from Malahide village and the same distance to Fairview, with buses in quality bus corridors (QBCs) running commuters from outside its gates.

The starting price for the redbrick terraced homes is from €385,000 for a three-bed mid-terrace with 107sq m/1,149sq ft. These will have particular appeal for savvy first-time buyers, as it provides enough space for at least one person to work from home using the box room as an office; similarly a couple could rent the second double bedroom under the Rent a Room scheme.

The properties have a separate living room and kitchen, with the latter running to more than 5.5m wide. There are 15 homes of this style in this first phase and they will also make fine family homes, says developer Julie Gannon. Prices for a second three-bed style of the same size start from €395,000.

All the homes have separate living rooms and a Cawley’s kitchen but are being sold without appliances or flooring.

The show units have been fitted by Angelina Ball of Avenue One interior design. The overall effect is the gentle enhancement of the existing spaces and you can shop most of the looks on her website of the same name. There’s plenty there to covet from smart rattan furniture to cool lighting and funky printed wallpapers by Mini Moderns.

Gannon Homes has had a good year with 80 units at its Millers Glen scheme in Swords now sold and another scheme at Belltree, Clongriffin, in Dublin 13 is now sold out. The firm is breaking ground on its next Swords development, Mooretown, where next year it will launch the first phase of two-, three- and four-bedroom homes.