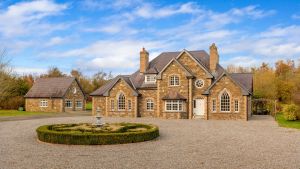 Sometimes townlands and features in the Irish landscape can get lost in translation when they are anglicised from Irish.

Take the Devil’s Mother, a jagged peak in the heart of Connemara, which is an arduous but popular six-hour hike for climbers. The actual name for this peak is Magairlaí an Deamhai, which translates literally as the Devil’s Testicles.

In Flemington South near Punchestown in Kildare, a local townland bears the name Tonaphuca. While its meaning can be translated as tone or song of the ghost, it can also mean the ghost’s bottom, the origins of which must be a yarn in itself.

In this scenic rural townland, just six kilometres from Naas, is a large hunting-style lodge which takes its name from the locality. Set at the end of a lantern -lit sweeping driveway behind electric gates for privacy, Tonaphuca, is a 418sq m (4,500sq ft) property that will tick many boxes for house hunters in search of a fine Kildare home.

Set on a site of almost eight acres with 5,000 trees giving a lush natural backdrop, a network of walkways leads to a secret garden laden with mature well-tended plants.

An orchard, accessed by a Laburnum walkway with the wonderful moniker Lana Phuca (ghost’s alley) is full of plum and pear trees along with a mix of both eating and cooking apple tree.

This, in addition to vegetable plots – shielded by bay hedging – means new owners could enjoy near self-sufficiency. There is also ample further space for chickens and, should you wish, plenty of room for a pony.

Spring is when this property comes alive when the 1,000 bulbs planted under the Scots Pine shielding the house come into bloom. The ground is strewn in blankets of yellow, purple an,d white from the daffodils, bluebells and snowdrops.

The house, though constructed in 2000, has been given a complete overhaul by its current owners which means it presents like a brand new property behind the Kilkenny cut stone façade.

Inside, the three reception rooms include an impressive “medieval” room with a high vaulted ceiling.

There is also a large garden room which has been used as a gym, should the eight acres outside fall short of exercise options.

Craftsmanship is evident throughout, giving the house a luxurious and homely feel. Modern comforts are set against a backdrop of handmade oak doors, a custom-built fire surround by Derek Malone and a solid mahogany staircase which was imported from South America.

The impressive property was last on the market in 2005, when it was seeking €2.2million through Gunne. It is currently on the market with Will Coonan in Maynooth seeking €1.35million.