The new brutalist backdrops and other views for a room 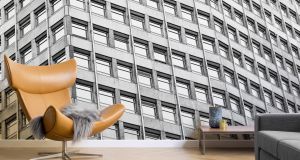 Brutalist wallpaper is probably too much for a full room, but would make a striking and bold feature wall

Brutalism may not strike many people as a thing of beauty, though there’s a newfound respect for its sometimes breathtaking style. Surely it’s still a step too austere for domestic settings? Think again, perhaps, and look at the brutalist architecture wallpaper range from muralswallpaper.co.uk.

Its concrete effect wallpaper murals range focuses not on entire buildings in the characteristic soulless, concrete 1960s and 1970s style, but on close-ups of details. There’s a zoom-in on a London high-rise; the raw, grey concrete vaults from a Harry Weese metro station; the repeat patterns of a Rio de Janeiro-inspired cathedral; the prefab concrete facade of Welbreck Street carpark in London, all reproduced in rolls of wallpaper.

The uniformity of pattern repetition and grey tones, along with the way they mess with scale, create a sort of optical illusion. The makers promise “a chic, urban, grunge look that will add a contemporary and unique feel” to a room (and disconcertingly suggest adding “soft furnishings such as plump pillows and warm throws to add a cosy feel to this urban concrete wallpaper”). At least the greys will go with most colour schemes.

The concrete range is part of a great selection of other unusual texture wallpapers – marble, stone, wood – as well as graffiti, landscape and underwater patterns, or the company can custom design a wallpaper from your photograph.

The brutalist patterns certainly make a startling statement. They’re probably too much for a full room, but would make a striking and bold feature wall. Imagine the effect of brutalist wallpaper on all the walls in a small room? Settle into a relaxing bath with a mesmerising concrete prefab facade looming over the bubbles and emerge with a nervy twitch and your hair standing on end.

Bunny & Clyde is a cool little collection of contemporary furniture for kids’ bedrooms designed by three mothers – although one of these is a mom to cats rather than kids, explains Nathalie Vos, who with her sister Lisa, the cat woman, and their childhood friend Mariette Bergh, came together to create a range inspired by the mid-century furniture they grew up with in South Africa.

The studio is based in Co Kerry because while living in London, Lisa fell in love with a Belfast man and he wanted to come home. She met him half way agreeing on Ireland, but favoured the countryside surrounding Kenmare to Co Antrim.

The furniture features two different cots, Coco and Harrison, that can be repurposed as small beds or daybeds as baby grows into a toddler. It also has sideboards that double as changing stations. Coco is Scandi in its influence while Harrison’s hairpin-style legs have a space-age feel.

For gifts they offer a baby room registry as well as smaller items like Mr Foxley, a cute in every sense of the word cuddly toy, €55; sharp duvet sets, €110 and cushions which can be found at bunnyandclyde.ie

Social mobility – on the walls

There’s giant origami in the foyer and social climbing tapestries inside, at the Royal Hibernian Academy (RHA) gallery these days. For those looking for visual inspiration for the soul, or even just for the home, a clutch of exhibitions has just opened at the gallery on Ely Place, Dublin.

Grayson Perry, the artist known for his ceramic vases and his cross-dressing, features in The Vanity of Small Differences, six tapestries created alongside his Channel 4, Bafta-winning documentary series All In The Best Possible Taste. The tapestries explore Perry’s fascination with taste and class, via the life of Tim Rakewell, and his progress through modern British society, from impoverished working class Sunderland, through successful app developer and nouveau riche stately home owner, to his death after crashing his Ferrari showing off.

On the way in, Folded Space, new work created by Cork-based sculptor Alex Pentek for the foyer and atrium of the RHA, is pretty striking, and inspired by his interest in origami, both on a practical and philosophical level.

Niall de Buitléar is interested in how drawing can grow into other media, and his Push and Pull is a dialogue between the two-dimensional and three-dimensional, the handmade and the digital, and is influenced by musician David Byrne’s writing about his collaborations with Brian Eno and Talking Heads.

And Headland, Elizabeth Magill’s large-scale exhibition of experimental landcapes, is informed by the Glens of Antrim, while the Ballinglen Arts Foundation’s 25th anniversary show draws from its collection of works inspired by the Mayo landscape.